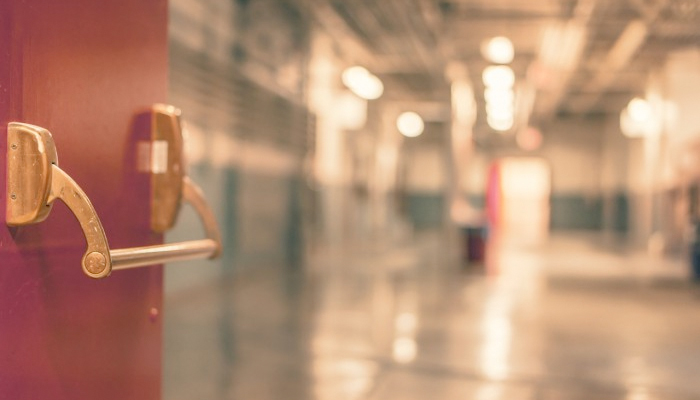 I don’t even remember if there was Christmas music playing in the hospital when we arrived. But with Christmas lyrics on loop in my head, it didn’t matter. I do remember the snow though, huge globs of wet snowflakes falling haphazardly as we drove the six hours to be at my grandfather’s side. His health had been failing for years, but now he had fallen.

All that could be heard when we arrived at the hospital was the swishing of the automatic doors at the entrance. The room they had my grandfather in couldn’t have been more than 10×12 feet, with pastel floral prints that appeared to seep into the wall instead of reside on it. We bumped elbows and squeezed into one another to make room for the various nurses and doctors vying for space to work.

My brother and I sat out in the waiting room.

“Nothing.” He looked away.

We sat in two padded chairs designed for anything but comfort. It’s an uncharitable thought, I know. But is it possible to get comfortable at a hospital?

My brother shifted his 5’9″ frame, preparing for the long night ahead. My petite self tried to follow suit. But comfort wasn’t truly necessary, things were going to improve. They had to. I had faith they would. Soon we would all be back home with the gas fireplace glowing and Michael Buble crooning.

Christmases of my past were filled with prime rib Christmas Eve dinners, the telling of the Christmas story from Luke 2, singing Christmas hymns late into the night. Everything from my holidays growing up was Christ-centered, Latter-day Saint infused merriment.

But that Christmas eve, as I stood by my maternal grandfather in a cramped ICU hospital room, there was no smell of cloved oranges or Christmas cookies, no twinkle lights, no gifts wrapped and waiting. It was just the nine of us, my parents, siblings, and grandparents. We weren’t hoping for a miracle, maybe just one more Christmas together at home. One more holy night.

As time clicked by we took turns—in the room, out of the room, past the vending machines, through the children’s play room, finding the wet footprints of other passersby in the hallways. We waited for news, but none came.

I sang to myself in hopes of lifting the gloom that was settling into my heart. But not even Last Christmas by WHAM could do the trick. The hours stretched on as we went for walks to stretch our legs. No matter how far or fast I walked down the long cold corridors of the ICU, doubt kept gaining on me.

The image of my grandfather laying still  in the hospital bed, the concern stretching my grandmother’s face, the way the nurses whispered, all made my blood feel cold. 10 pm found us at a table somewhere between the waiting room and the ICU.

We tried to crack jokes.

“What did one snowman say to the other?”

Neither of us laughed. But I refused to let the defeat into my heart just yet. Sadness slumped my brother’s shoulders and the pain ricocheting through my mother seemed to rest in his face. My brother always felt more than others did as he took on the world. And now the world was taking him down. But I didn’t want our Christmas to be filled with tears. I was not  ready to admit that life ends—especially on Christmas.

The meager snowflake decorations strung along the nurses station counter sagged. I tried to breathe through my mouth; as it turns out, hyper-cleanliness smells nothing like Christmas. After a while there was nothing else I could say to distract either or us. The clock ticked away as we breathed in the smell of artificial sanitation.

Hours earlier it was Christmas as usual, until the call came through. Articles of clothing were thrown at worn duffel bags, pillows collected, coats flung over arms as we tumbled into our  12 passenger Ford van. As soon as my father could leave the school where he taught, we departed, leaving all of our friends and neighbors at home without any idea of what was transpiring on our Christmas Eve. Even now my phone lay silent.

“Do you think he’ll pull through?” I asked my brother. The Priesthood blessing, given only a half hour earlier, had not given any grand proclamation of a miracle. Instead I listened in disbelief as my uncle said that God’s will would be accepted by those present.  Even as the hands which held God’s power on Earth had receded from my grandfather’s head, we had all seen the way he struggled to breathe, the obvious pain wracking his aged frame.

“He’s not improving.” My brother responded, begging me with his eyes not to be upset with him for the observation. I didn’t hold him responsible. I simply sat dazed. But I had faith, we all did. And with modern medicine, couldn’t he be saved? Could it really be God’s will to have our Christmas seeped in the pain of parting?

As we’d driven, we’d clung to the hope that recovery was possible. It kept us awake for the 6 long hours through the mountain pass steep with slick roads, across the open expanses of Idaho flecked with snow, but mostly bald and dry, stopping only for bathroom breaks. That hope had also kept us quiet, no squabbling over seating arrangements or who got to choose the music. All the while, the snow fell.

Outside, the world was still being coated in white. Inside it was muffled, hushed. A truly silent night, a holy night. All was calm, all was bright. And yet, none of those things applied to the state of our hearts. My heart was rebelling against peace. If this was God’s will, then surely it had to be mine as well. But how?

“Do you want to come say goodbye?” Someone came to find us. We consented. The loudest noises in the room were the beeps of the monitors, flashing green, blue, and red. I kept my eyes on the machinery, the unchanging numbers I couldn’t decipher, the steady kick of the heart monitor, the sigh of the oxygen rushing through the thin transparent tubes.

The faces of my family were pale, drawn with anticipatory grief. Shoulder to shoulder, we stood as if to hold one another up. I hung back as each of my siblings took their turn. I looked to my grandmother. There was resolution in the way she held herself—my grandfather’s defender, his help meet. She stood by his shoulder, unwilling to leave since they’d arrived. My youngest sister stepped back from the hospital bed, tears running freely down her face. It was my turn. I swallowed hard.

“And in despair I bowed my head:

If I opened my mouth, it would make it real. Too real. My mother encouraged me to say something. I reached for my grandfather’s hand and watched my own vision blur.

Then I released his hand for the last time.

All that could be heard as we drove away from the hospital was the swashing of the wiper blades. What was there left to say after saying our goodbyes? Our grandfather would soon return to the God who gave him life. But where better to be on Christmas Day?

As we passed questionable gas stations–the only places open on a Christmas Eve at 11 pm, my father tried to cheer us. The greatest lesson my father has taught me, is how to laugh when my heart is breaking.

This time, my brother and I both chuckled.