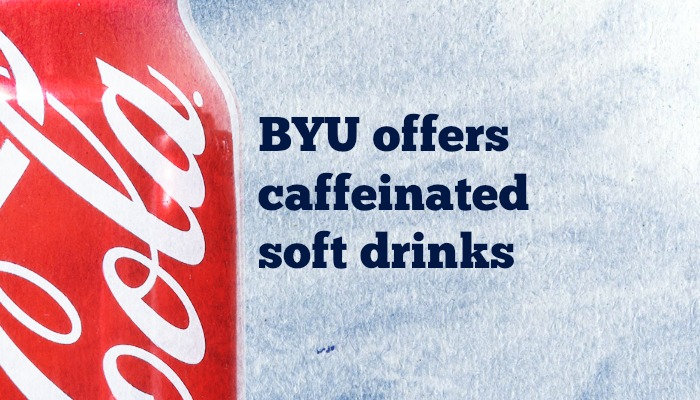 It seems that the coffin of caffeine prohibition has received its final nail. BYU Dining Services, responding to customer demand, are adding caffeinated soft drinks to stores and vending machines all over campus today.

While the Church has never officially denounced the consumption of caffeine, many members are well known for abstaining from it in an effort to observe the Word of Wisdom. Some theorized that coffee and tea were included on the list of things not to consume due to their caffeine content. Thus, the director of BYU Food Services made the decision to remove all caffeinated beverages from the school in the 1950s.

Since then, there has been an ongoing debate among Church members as to whether caffeine should be prohibited as an addictive substance. On the one hand, those against caffeine point out that it is a stimulant, and that regular use does cause dependence in some individuals. Those on the other side of the fence reply that caffeine-haters had better be ready to give up their chocolates and brownies as well.

Granted, there are Church magazine articles and statements by earlier leaders that seemingly confirm the bias against caffeine. But after members and non-members alike continued to claim that abstaining from caffeine is official doctrine, Church leaders weighed in with an official clarification: “the Church revelation spelling out health practices…does not mention the use of caffeine.”

Perhaps it was in response to this statement that consumers at BYU became more insistent in their requests for the return of caffeinated beverages. Perhaps, now that one of the last holdouts against caffeine has relented, the battle over the issue can end.

Tell the Dr. Pepper lovers that their cans are safe—except at BYU, whose vendor contract is with Coca-Cola.