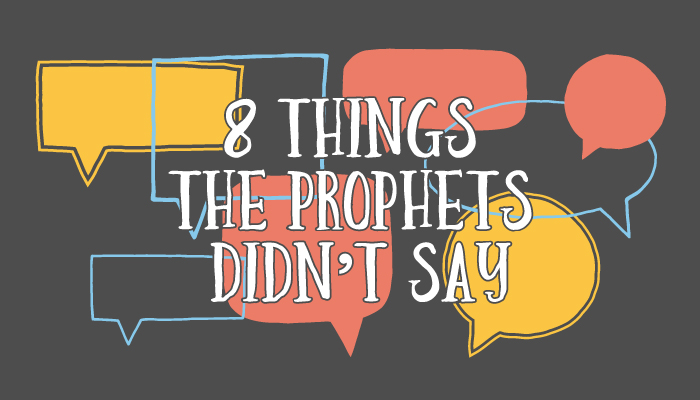 “You shouldn’t believe everything you read on the internet.” – Abraham Lincoln

Wise words such as these have reached the pinnacle of their existence now that the internet makes information (yes, even false information) readily available and easily distributed. It then comes as no surprise that quotes thought to come from notable church figures have other origins entirely. Be sure to keep this in mind as you scour Pinterest for a great Relief Society — or Elders Quorum, no judgment — printout to share at your next lesson. To make the lesson planning a bit easier, here are 8 quotes to watch out for.

“Anyone who imagines that bliss is normal is going to waste a lot of time running around shouting that he has been robbed. The fact is that most putts don’t drop, most beef is tough, most children grow up to be just like people, most successful marriages require a high degree of mutual toleration, and most jobs are more often dull than otherwise.

Life is just like an old time rail journey…delays, sidetracks, smoke, dust, cinders, and jolts, interspersed only occasionally by beautiful vistas and thrilling bursts of speed. The trick is to thank the Lord for letting you have the ride.”

Who said it? Gordon B. Hinckley

No, who actually said it? Columnist Jenkin Lloyd Jones

President Gordon B. Hinckley quoted editor and publisher of the Tulsa Tribune, Jenkin Lloyd Jones in his BYU speech God Shall Give Unto You Knowledge by His Holy Spirit. President Hinckley gave credit where credit was due, of course, regarding Jones as “one of [his] favorite newspaper columnists”. The quote can be seen all over Facebook and Pinterest, paired with Hinckley’s face and no reference to Jenkin Lloyd Jones anywhere.

“If you vote for the lesser of two evils you are still voting for evil and you will be judged for it. You should always vote for the best possible candidate, whether they have a chance of winning or not, and then, even if the worst possible candidate wins, the Lord will bless our country more because more people were willing to stand up for what is right.”

Who said it? Ezra Taft Benson

No, who really said it? Possibly no one.

This quote does not originate from any talk or official document, but rather, an account given by Mike Thompson in an online forum from 2009. If you’re wondering who Mike Thompson is, no one really knows. Except for Teri. 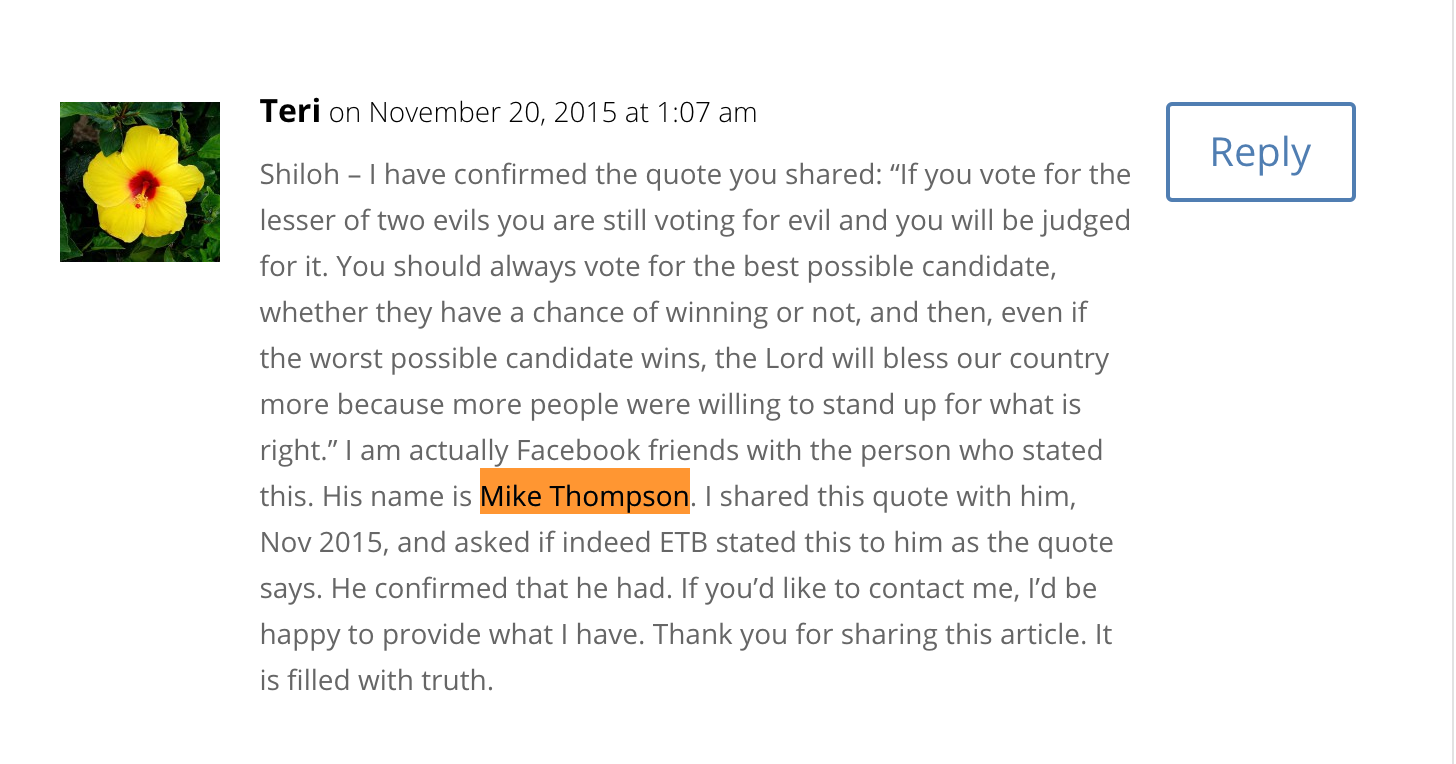 Note: Teri has responded in several comments below to vouch for the trust she has in Mike Thompson, who had a correspondence with Ezra Taft Benson and learned much from their association. We’ve also heard from Mike. So this quote is real, but not made to the Church at large, but as private advice. 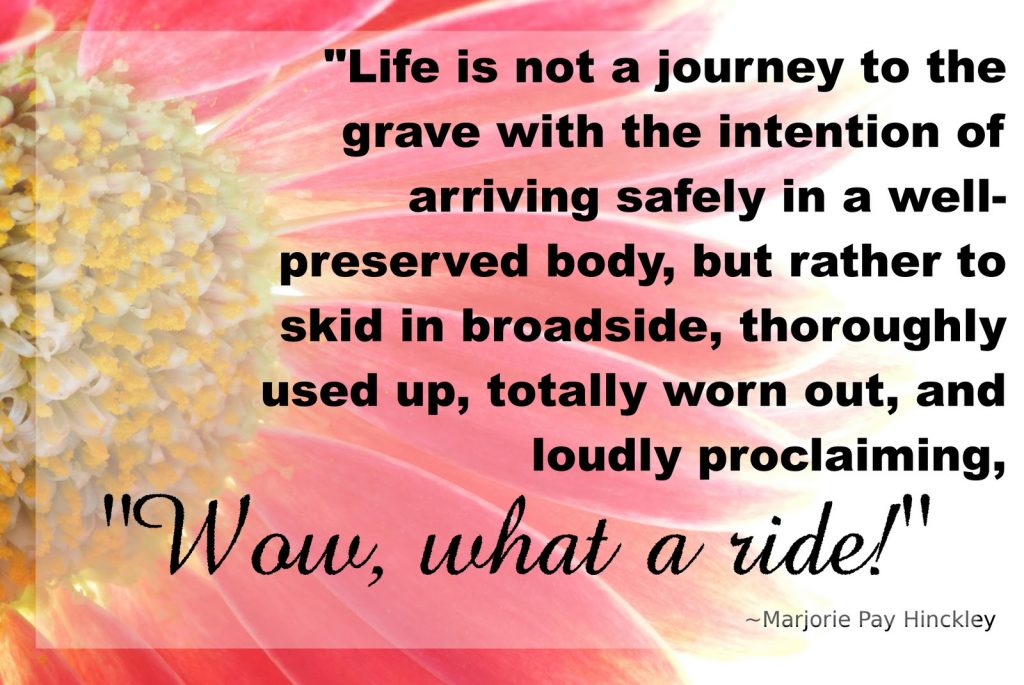 Who said it? Marjorie Hinckley

Though goodreads attributes this quote to Marjorie Hinckley, it was in fact Hunter S. Thompson who wrote this in The Proud Highway: Saga of a Desperate Southern Gentlemen. When you consider that the man who stated the above quote was also the author of the drug and alcohol fueled Fear and Loathing in Las Vegas — and not the sweet late prophet’s wife—it takes on a whole new meaning.

“That which we persist in doing becomes easier to do, not that the nature of the thing has changed but that our power to do has increased.”

Who said it? Heber J. Grant

No, who actually said it? American essayist and poet, Ralph Waldo Emerson

Though it was actually Ralph Waldo Emerson who originally uttered the inspiring words above, goodreads, wikiquote, and occasionally a pinterest user  give all the credit to Heber J. Grant. The misattribution can be traced back to the 1972 New Era piece that cites the quote as one of Heber J. Grant’s favorites, though he gave credit to the original author.

“Preach the Gospel at all times and when necessary use words.”

Who said it? Dieter F. Uchtdorf

No, who actually said it? Saint Francis of Assisi 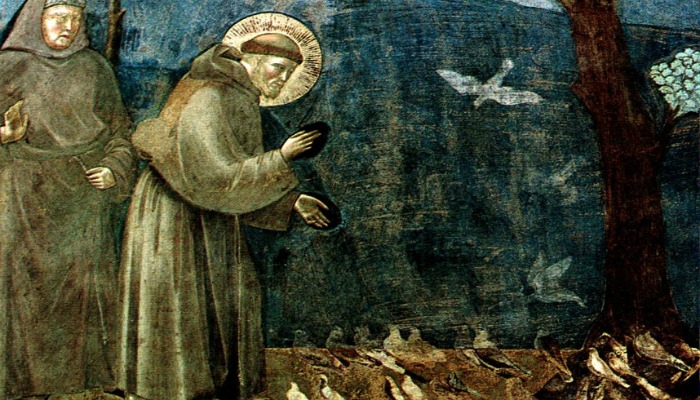 “Many young women are serving missions. Many are preparing to serve. Not because they aren’t married or have nothing to do, but because they have a desire to serve and are therefore called to the work. The reason so many are going is because in the next generation, Heavenly Father will be sending His priesthood army to earth and wants to send them to mothers who have been properly trained and taught in the gospel. What better training can a young woman have than a mission?” 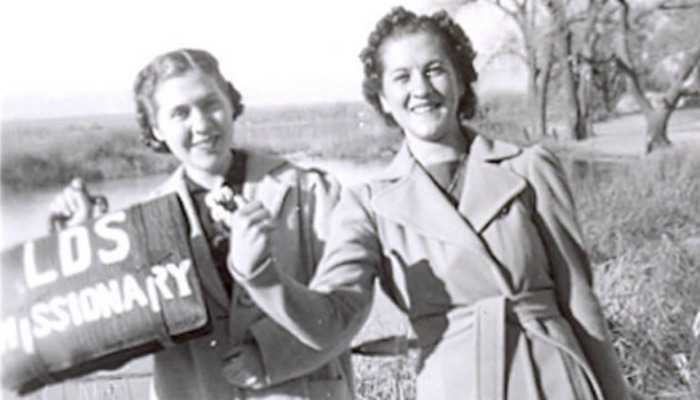 Who said it? Gordon B. Hinckley

No, who actually said it? No one — especially not Hinckley.

This statement began making rounds in 2007, and sparked the interest of many who knew Hinckley to be more keen on discouraging sisters from serving missions. In the October 1997 Priesthood session, Hinckley reminded,”We do not ask the young women to consider a mission as an essential part of their life’s program.” The quote even prompted a memo from the Seminaries and Institutes Administrators’ Council warning teachers from perpetuating the “spurious sister missionary statement”.

“There are few ways in which good people do more harm to those who take them seriously than to defend the gospel with arguments that won’t hold water. Many of the difficulties encountered by young people going to college would be avoided if parents and teachers were more careful to distinguish between what they know to be true and what they think may be true. Impetuous youth, upon finding the authority it trusts crumbling, even on unimportant details, is apt to lump everything together and throw the baby out with the bath.”

Who said it? Henry B. Eyring

No, who actually said it? Henry Eyring Sr. 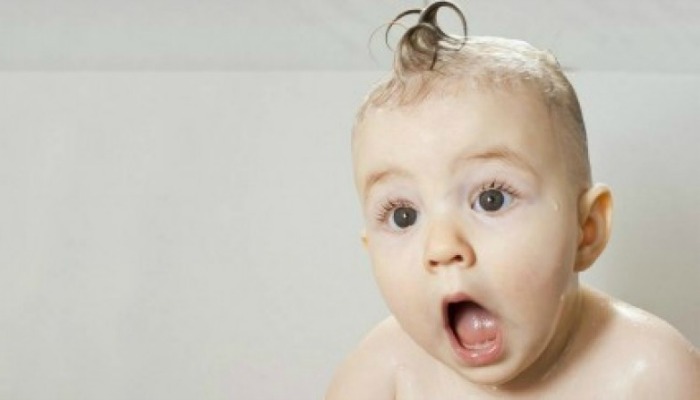 Though I’m sure Henry Eyring Sr. wouldn’t mind his son spreading his wisdom throughout the lands, as a scientist, he might have a problem with the improper citation that has taken hold of the quote. The quote can be found in Mormon Scientist: The Life and Faith of Henry Eyring with credit given to its rightful author, Henry Eyring.

“There are those fornication pantaloons, made on purpose for whores to button up in front…”

Who said it? Brigham Young

Who actually said it? No one.

The allegation that Brigham Young spoke so harshly of front buttoning pants comes from the single-issue Mormon Expositor. If you want to find more information on the Mormon Expositor, good luck. The “newspaper” released only one issue and is presently referred to as a 19th century version of The Onion. In other words, all of the paper’s claims— however entertaining — are false.