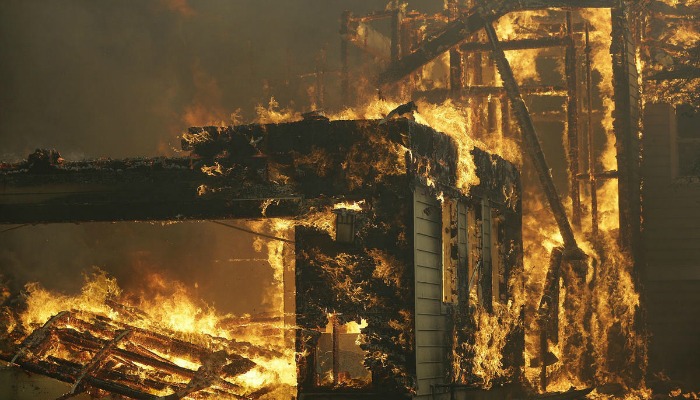 The Santa Rosa wine-country wildfires slowed down for a moment Thursday, October 12th, allowing firefighters to catch their breath after battling the blaze that scorched 191,000 acres of land, left 3,500 buildings torched, and claimed 24 lives so far. Hundreds of people are still reported missing, and thousands more have been displaced by the fires.

“These fires are a long way from being contained, so we’re doing to best we can people that have been displaced and help them to hopefully rebuild their lives” said Barry Dugan, a Sonoma County spokesman.

Across Northern California, 21 fires are currently burning — 7 more than when the governor of California declared a state of emergency just 3 days ago.

“This is a serious, critical, catastrophic event,” said Cal Fire Chief Ken Pimlott, according to The Washington Post.

The Santa Rosa California Stake of The Church of Jesus Christ of Latter-day Saints has been heavily impacted by the catastrophe. Thirty-three member homes from the Santa Rosa Stake were destroyed in the blaze; at least 8 more homes from neighboring stakes were burned to the ground.

“All of our members [and missionaries] are safe — that’s the best news,” said Santa Rosa California Stake President Gary Kitchen.

All Church-owned properties have been left unscathed by the fires, although some chapels were still without power as of Tuesday, October 12th. The LDS Church has opened the doors of its meeting houses to those who have been displaced by the fires, according to Deseret News. Members in the area are doing all they can to assist those in need, even if they’ve been affected by the fires themselves.

One Napa stake high-council member lost his home in the blaze, and just hours later, was attending stake emergency meetings.

“He just told us, ‘I can either sit down and feel sorry for myself — or get up and try to help others’,” President Judd told Deseret News.

It will take a few days for a full damage assessment to be completed for the LDS community.