Faith Gospel Doctrine Why Did Nephi Have to Kill Laban? 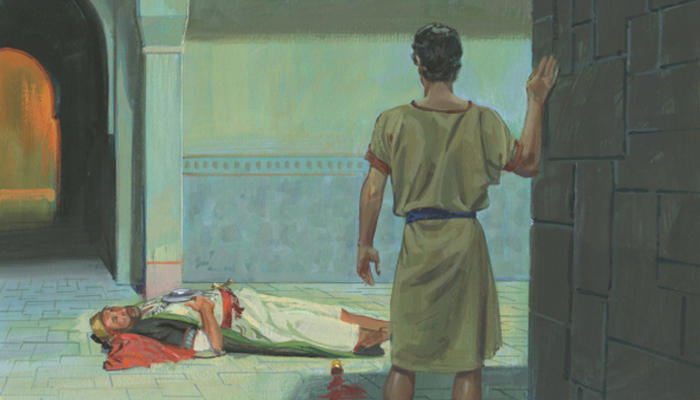 Every time I start reading the Book of Mormon, I reach 1 Nephi 4 with the story of Nephi and Laban and I struggle with the same question, “Why did Nephi have to kill Laban?”

Nephi returns a third time to Laban’s house trusting the Lord to open a way to fulfill His mission. He finds Laban in a drunken stupor and is commanded to cut off his head with his own sword. He then finds Laban’s servant, retrieves the records and carries them to his brothers outside the city. When Zoram tries to flee back to his servitude, Nephi offers him freedom and a place with his father.

Laban was already drunk and unconscious. Why did Nephi have to kill him to accomplish his mission?

Rereading this story recently, I finally realized that perhaps Nephi included this event in such detail to answer even more important questions, eternal questions. How are we freed from Satan’s power? What is our relationship to Jesus Christ? How do we gain eternal life?

It is much more than an historical account; it is also an allegory—a symbolic story featuring the following characters:

So why did Nephi have to kill Laban? I still don’t have a complete answer to that question, but that is not the essential question. With a shift of focus I have discovered a few answers to a question that really matters: What does this story teach me about the Savior?

Just as I don’t completely understand why Nephi killed Laban, I can never fully comprehend how the Savior fulfilled His Atonement or how he overcame Satan.  but what is important is that I know He did.

Jesus did not and will not run away from Satan or simply sneak around him. He will destroy him.

Laban has power to bruise Nephi’s heel (steal his riches and try to kill him), but Nephi ultimately crushes his head (or cuts off his head).

Satan had power to bruise Christ’s heel by stirring up wicked men to crucify him, but through that same act the Atonement crushes Satan’s head by conquering both sin and death, the only real weapons he ever had.

Nephi does not just take the plates and leave, he invites Zoram to come with him outside the wicked city, outside the boundaries of his servitude. Then Nephi makes a covenant with Zoram which offers him both freedom and a family—Nephi’s own family.

Although Zoram was one of the most trusted servants of the enemy, Nephi fully accepts him and offers him everything he has.

Likewise, Jesus Christ asks us to leave our own wicked Jerusalem behind. And if we are willing to do so, He extends covenants that will make us forever free.

No matter how trapped we are in the enemy’s enslavement, Jesus cuts our bonds from Satan’s power and offers us an eternal place in His family.

Traveling to the Promised Land

Zoram  is not merely left as a free man outside the walls of Jerusalem, nor is he sent to find his own way to the promised land. Nephi travels every step with him, offering protection, direction and the vehicle necessary to safely cross the stormy sea.

Jesus did not just show us the path to eternal life, He journeys with us. He is our guide and our refuge as we cross our wilderness and our stormy seas to the promised land. He is the way, the vehicle to carry us safely home, and He travels every step of the way with us.

When Nephi offered Zoram a place with his father, he was also offering to share his inheritance. Zoram did not come as a servant; he came as a brother. He came as an equal.

When Jesus frees us from our servitude, He does so with the promise to share all that He has and is. He offers Himself as our brother, and His whole desire is to transform us to be like Him.

Obeying Perfectly and Opening the Way

More than death, this story is about the need to perfectly obey and open the way to eternal life, no matter the cost.

The Spirit commanded Nephi to kill Laban, something he did not want to do and did not know if he had the courage to do. He shrunk, he tried to find another way, but ultimately he knew he must obey.

Prophets in the Book of Mormon repeatedly wrote of the necessity of the scriptures in remembering the covenants and thus walking the path of eternal life. By obtaining the plates, Nephi allowed his people the opportunity to gain eternal life.

To an infinitely greater degree, Jesus’ Atonement allows us to make those covenants and institutes the path to exaltation. He too shrank and begged for another way to accomplish His mission, but ultimately He knew there was no other way. And so He conquered, no matter the cost. And oh, what an awful cost.

But despite the cost, He did not shrink, He did not sneak around, and He did not run away. He overcame perfectly and offers us an equal share in His perfection.