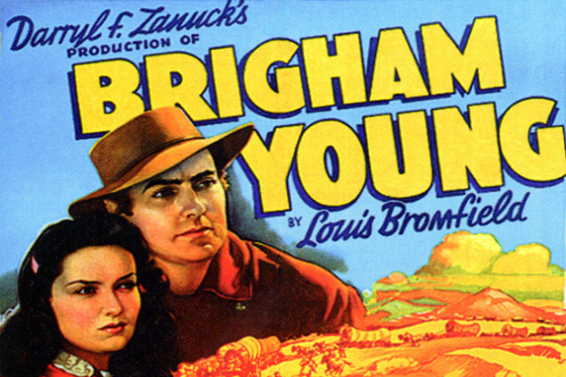 When Hollywood made the decision to create a film based on Brigham Young back in 1940, they did not know if it was going to impress audiences. The movie “Brigham Young” starred names such as Tyrone Power (today is his 100th birthday) as Jonathan Kent, Linda Darnell as Zina Webb, Dean Jagger as Brigham Young, Mary Astor as Mary Ann Young, one of Brigham Young’s wives, and Vincent Price as Joseph Smith Jr. It was directed by Henry Hathaway and produced by Darryl F. Zanuck. Unfortunately, the film did not do well in the box office. Despite this, quite some good came from the film.

President Heber J. Grant was the prophet and president of The Church of Jesus Christ of Latter-day Saints when the “Brigham Young” movie was in production and during it’s theatrical release. When he heard about the production the film, Grant’s written reaction to Twentieth Century Fox was:

“I hope we shall not to be over anxious, and we have no disposition to be oversensitive, but we are tremendously concerned that this picture shall be a true picture, and, while we are not, any of us, playwrights, or dramatists, or Movie technicians, we can appreciate the war which must constantly go on in one preparing a picture, between the highly dramatic and the sober fact.”

The Church of Jesus Christ of Latter-day Saints had previous scrutiny from other films produced such as: “Victim of the Mormons” (1910), “The Mountain Meadow Massacre” (1912), “The Mormon” (1912), and by several others. The negative light that Hollywood had put the Church under gave Grant reason to feel wary. However, as soon as the movie was released, President Grant went to a private viewing with his counselors J. Reuben Clark and David O’ McKay. President Grant stated this following the film:

“I endorse it with all my heart and I have no suggestions. This is one of the greatest days of my life. I can’t say any more than ‘God Bless You.'”

Once the movie was shown for public viewing, it’s popularity in the Salt Lake area was astounding. The attendance of the film in theaters within Salt Lake City broke a record for the number of theaters that opened a single picture. There were mixed reviews of the movie, however. Most criticism came from the portrayal of Brigham Young as a self-doubting leader.

“I have heard some little criticism of it, but we cannot expect the people who do not know that Brigham Young was in very deed the representation of God upon this earth who do not know of his wonderful character, to tell the story as we would tell it.”

Despite small issues and a miniscule lack of historical accuracy, the public who praised the film believed it to be well done.

What the “Brigham Young” movie gave The Church of Jesus Christ of Latter-Day Saints was better and more positive publicity.  According James D’arc, who gave commentary to the film in the movie’s DVD release:

“Brigham Young, to them” (the viewers) “was seen in this screen portrait as a courageous and human leader who, while beset by natural self doubt, rose successfully to each challenge of circumstance.”

Brigham Young’s depiction in the movies altered him, according to D’arc:

“from [a] perverted religious fanatic to [a] virile striving pioneer.”

The positive publicity that the Church received helped the public to see how benevolent The Church of Jesus Christ of Latter-day Saints is. Additionally, the Church welcomed Dean Jagger, the actor who portrayed Brigham Young in the film, who became a baptized member of the Church in 1972.