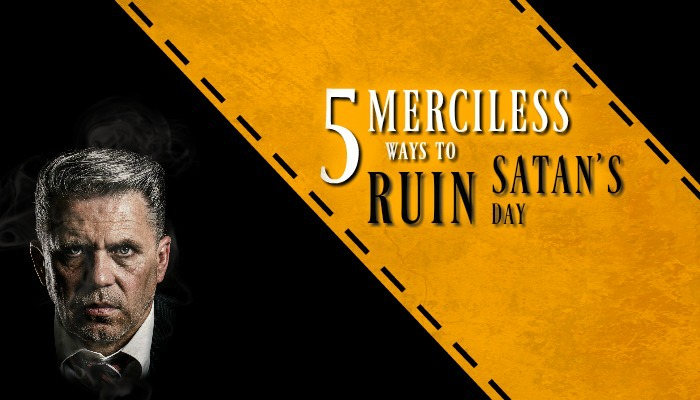 Check out what Elder Jeffrey R. Holland said about Satan at a General Conference back in 2011: 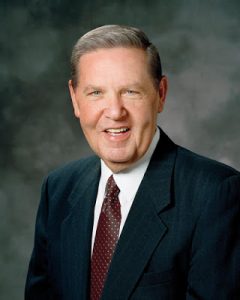 “We speak boldly because Satan is a real being set on destroying you, and you face his influence at a younger and younger age.”

It’s as true now as it was back then—he’s real, and he’s determined.

Christ himself warns in The Book of Mormon that “Satan desireth to have you, that he may sift you as wheat.” Elder Bruce R. McConkie adds clarity, saying that “Satan wants you in his harvest. He wants to harvest your soul, and bring you into his granary, into his garner, where he will have you as his disciple.”

The scriptures tell us that Lucifer has the power to bruise our heel, but with Christ’s help we have the power to bruise his head. He’s gotten really good at bruising heels. He’s hurt you, he’s hurt me, he’s hurt the ones you love as well as every single stranger you pass on the street. He is the antithesis of mercy. He will kick you while you’re down and he will never stop.

Frankly, I’m sick of it. I’m sick of watching and feeling the suffering that comes from bad decisions you, I and others didn’t have to make. I’m sick of the tricks, the ploys, the lies, the manipulation, the fear, the doubt and the temptations.

I want to fight back, and I want you to join me. Like Joseph Smith, I want you and I to “prove a disturber and an annoyer of [Satan’s] kingdom.”

So, how do we do it? I’ve been scheming in my lair and here are a few ideas of how we can make Satan wish he’d never been born (that’s an insult … because he never was born).

Stagnant water becomes poisonous, maybe that’s why Christ is so often compared to a fountain of living water. If we’re dead water, pretty soon we’re going to be dead in the water (see what I did there?).

In order for Satan to sift us as wheat, he doesn’t have to convince us to actively rebel against God. He’s perfectly content with us simply doing nothing.

Remember Lehi’s dream about the Tree of Life? Some people reached the tree, some people were in the great and spacious building and some people were still trying to figure out which way to go—but if we just get tired and sit around in the mists of darkness, Satan still wins. The only way we can even hope to beat him is to be actively moving.

What do I mean by that? Let’s look at some scriptures again:

“Verily I say, men should be anxiously engaged in a good cause, and do many things of their own free will, and bring to pass much righteousness…”

AKA get out of bed and do good things.

If you accept a calling but don’t do anything to fulfill it—Satan wins.

If you receive the Priesthood but never use it—Satan wins.

If you have the scriptures but never study them—Satan wins.

“Teach them to never be weary of good works, but to be meek and lowly in heart; for such shall find rest to their souls.”

AKA don’t get tired of doing good things! This happens all the time. I sit on the couch and think, “I really should do the dishes,” followed by the thought, “Naw, too tired.” Don’t do that. Just do good things.

The same principle applies to major decisions in your life. Oftentimes divine guidance will come as you make a decision and actively pursue it instead of passively waiting to be “compelled in all things”.

2. Say goodbye to your favorite sins

You know what they are, and they’re parasites. They’re little ticks that wear us down over time. We can’t expect perfection from ourselves, but we’ve also got to stop justifying those little sins we commit.

Cut those puny sins out of your spiritual diet. The breakup is going to be difficult, and Satan won’t go down without a fight, but if we’re looking to hit Satan where it hurts, we’ve got to start by cleansing the inner vessel.

3. Don’t hoard mistakes from the past

You’re familiar with the pattern. You’re having a great day, making good choices and loving life—then you remember that awful thing you did eleven years ago and the reality of your terribleness hits you like a ton of bricks.

Those thoughts aren’t coming from the Spirit. They’re just not. If there are sins in your life that you need to take care of, the Spirit will urge you to repent of them. He’s not going to fill you with hopelessness.

If you’re not sure whether or not you’ve fully repented of them, just chat with your bishop. That’s what he’s there for, and you deserve the peace that comes with the knowledge that you’re clean. If you have repented of them, don’t let them catch up to you again. When you find yourself in the proverbial snake pit—get outta there.

Satan has a great memory and loves to use your rocky past to cripple your promising present. Forgive yourself, and move on. That’ll show him.

You and I aren’t the only ones who’ve been ticked off at Satan before. Here’s some advice directly from the scriptures about how to tick him off:

The best defense is a good offense, right? We’re taught that our bodies are temples, but to metaphorically express how I like to think prayer can operate in our lives, think of your body as Hogwarts (start at 0:44):

Pray for protection for yourself and others. Pray for light in the darkness. Pray for strength not to give in to temptation and for the strength to help others do the same. Satan hates that.

The most offensive thing we can do to Satan after we’ve done our best to evict him from our own lives is to then help others to do the same. Do what Enos did. First, he prayed for his own soul:

…I kneeled down before my Maker, and I cried unto him in mighty prayer and supplication for mine own soul…

And then he prayed for his people:

…when I had heard these words I began to feel a desire for the welfare of my brethren, the Nephites; wherefore, I did pour out my whole soul unto God for them…

And then he even prayed for his enemies:

…my faith began to be unshaken in the Lord; and I prayed unto him with many long strugglings for my brethren, the Lamanites…

We need to pray for others, but we also need to get out and serve them, teach them, befriend them, listen to them, and do what Satan hates most of all—love them.

How else can we ruin Satan’s day? Let us know in the comments section.