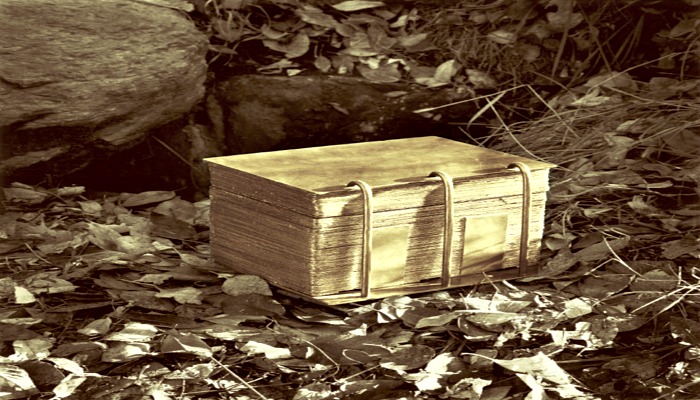 That assumption is easily construed from the title page:

The Book of Mormon

And not to take anything away from Mormon because I think he is astonishingly amazing in every way, but I never felt satisfied with that explanation. It always left something missing for me.

The Lord Follows a Pattern

The Lord follows a pattern. Walk through this pattern with me and see if you notice my quandary.

In all the titles depicting covenant, a book named after a great guy just feels a little discombobulated to me.

The fact that the Book of Mormon contains books within it called the Words of Mormon and Book of Mormon (which books followed the pattern of other prophet-leaders) also led me to conclude that Mormon wouldn’t have named the whole abridgment after himself.

Ultimately, despite my confusion, I just assumed Moroni inferred that on the title page, honoring his father.

The Land of Mormon

Mormon actually answered my misunderstandings himself.

And behold, I am called Mormon, being called after the land of Mormon, the land in which Alma did establish the church among the people, yea, the first church which was established among them after their transgression.

Alma’s son Alma, in his great soul-searching treatise of Alma 5, described the same place and experience.

I, Alma, having been consecrated by my father, Alma, to be a high priest over the church of God, he having power and authority from God to do these things, behold, I say unto you that he began to establish a church in the land which was in the borders of Nephi; yea, the land which was called the land of Mormon; yea, and he did baptize his brethren in the waters of Mormon.

And behold, I say unto you, they were delivered out of the hands of the people of king Noah, by the mercy and power of God.

Why Was Mormon Named Mormon?

I started thinking about Mormon’s name.

And I, Mormon, being a descendant of Nephi, (and my father’s name was Mormon)….

There are so many people named, or renamed, with the name of their future calling. Jehovah specifically told Isaiah to name his children for signs. Maher-shalal-hash-baz’s name means “to speed to the spoil, he hasteneth the prey.” Shear-jashub’s name means “the remnant shall return.” Abram “exalted father” became Abraham “father of a multitude.” Sarai possibly meaning “contention” became Sarah “princess.”

Zacharias and Elisabeth obeyed angelic command naming their son John, “Jehovah has been gracious; has shown favor.” He later became John the Baptist. What favor we receive through that covenant! And, of course, Jesus means “God is help” or “Savior.” Christ means “anointed” and “Messiah.”

We don’t know many of the names’ meanings in the Book of Mormon. But I kept thinking about how prevalent purposeful names were throughout the Old Testament and knew the Nephites were part of that naming heritage.

Helaman purposefully named his sons Nephi and Lehi after their ancestors.

Therefore, my sons, I would that ye should do that which is good, that it may be said of you, and also written, even as it has been said and written of them.

The Land of Mormon Named by a Wicked King

“Named to remember the works that were good.” And that brought me back to the land of Mormon.

Alma, a priest of the wicked King Noah, heard the prophet Abinadi’s words, repented, and started sharing the teaching with whomever would listen. The listeners grew in number and needed to find a safe place to meet. They decided to meet in the land of Mormon.

And it came to pass that as many as did believe him did go forth to a place which was called Mormon, having received its name from the king, being in the borders of the land having been infested, by times or at seasons, by wild beasts.

Now, there was in Mormon a fountain of pure water, and Alma resorted thither, there being near the water a thicket of small trees, where he did hide himself in the daytime from the searches of the king.

I feel like the king who named the place is King Noah, but feel like he must have been inspired in some way by our Heavenly King to name something a name that becomes so pivotal. But, maybe the Lord likes showing how even something designated or created by a wicked person, through His Grace, becomes glorious!

Alma restored the spiritual refugees to God’s covenant. He taught them the law of the Lord.

People gathered.  Alma taught them the law of the Gospel “which gospel is the gospel of repentance and of baptism, and the remission of sins, and the law of carnal commandments.” 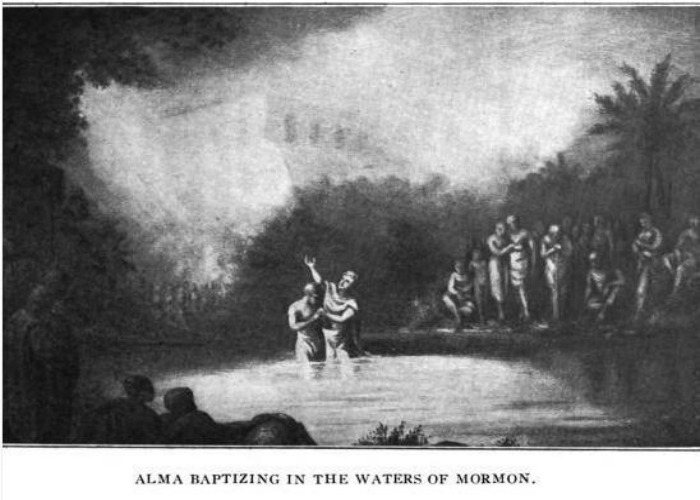 I started paraphrasing this, but I just cannot.  It is so beautiful and full of light to me, especially in context of why the Book of Mormon may be named for this event.

And it came to pass that he said unto them: Behold, here are the waters of Mormon (for thus were they called) and now, as ye are desirous to come into the fold of God, and to be called his people, and are willing to bear one another’s burdens, that they may be light;

Now I say unto you, if this be the desire of your hearts, what have you against being baptized in the name of the Lord, as a witness before him that ye have entered into a covenant with him, that ye will serve him and keep his commandments, that he may pour out his Spirit more abundantly upon you?

And now when the people had heard these words, they clapped their hands for joy, and exclaimed: This is the desire of our hearts.

Alma baptized everyone willing to make that covenant.

…yea, and they were baptized in the waters of Mormon, and were filled with the grace of God. And they were called the church of God, or the church of Christ, from that time forward. And it came to pass that whosoever was baptized by the power and authority of God was added to his church.

Alma ordained priests to preach truths of the kingdom of God. Alma commanded that they should have no contention. They should be united in doctrine and love.

And thus they became the children of God.

Then Alma installed the sabbath day to worship and assemble together and reminded them to be grateful to the Lord. The priests labored to support themselves, relying on God for His to strengthen their teaching, thus reducing the lust-filled and covetous lives the priests of Noah operated under.

Alma instituted a law of consecration.

And thus they should impart of their substance of their own free will and good desires towards God, and to those priests that stood in need, yea, and to every needy, naked soul.

And this he said unto them, having been commanded of God; and they did walk uprightly before God, imparting to one another both temporally and spiritually according to their needs and their wants.

They Became the Children of God

“And thus they became children of God.” When is this phrase used scripturally? In one use, while answering a trickster questions by the Sadducees, the Savior used the phrase. It’s poignant and I paused when I thought on the ramifications.

Neither can they die any more: for they are equal unto the angels; and are the children of God, being the children of the resurrection. … For he is not a God of the dead, but of the living: for all live unto him.

Alma’s teachings at Mormon hearken back to King Benjamin’s sermon which had a similar effect on the people. They made the covenant. Through that covenant, they had no more desire to sin. Their desire turned to faith. Their faith turned to knowledge. They were given and received the name of Christ. They became the sons and daughters, the children of Christ.

Alma’s people turned their desire to faith to knowledge and obtained a promise, a calling and election, too.

What Does Mormon Really Mean?

Suddenly, the word “Mormon” took on life and covenant and the gift of eternal life. The place, the event, the people embodied “Mormon.” The book as a whole embodied this journey to God. Every prophet in every story marked that path in some aspect for me and you.

The realization also emphasized Joseph Smith’s declaration about the Book of Mormon.

I told the brethren that the Book of Mormon was the most correct of any book on earth, and the keystone of our religion, and a man would get nearer to God by abiding by its precepts, than by any other book.

Which brought up another “issue” that hadn’t really jived with me.  In 3 Nephi 27, Jesus answered the Nephites’ questions about what to name the church. He said to name the church after Him.  If the church was called by the name of a man, then it was that man’s church, and not the Savior’s church.  The church was to be called by His name, The Church of Jesus Christ. Hence in our day, The Church of Jesus Christ of Latter-day Saints, but often nicknamed the Mormons.

If the Book of Mormon was named after a man, our nickname delineates the church as that man’s church. That’s always bothered me. But if the word “Mormon” derives from a place of covenant and salvation and exaltation, that appropriately identifies Jesus Christ’s church and God’s work and glory.

And how befitting that the editor of such a book held that name. Mormon’s life epitomized the Mormon path. Mormon wanted everyone to find and walk that path.

Behold, I speak unto you as if ye were present, and yet ye are not. But behold, Jesus Christ hath shown you unto me, and I know your doing.

The Book of Mormon

Back to the Title Page.  Moroni wrote the intentioned purpose of the Book of Mormon.

…Which is to show unto the remnant of the house of Israel what great things the Lord hath done for their fathers; and that they may know the covenants of the Lord, that they are not cast off forever—And also to the convincing of the Jew and Gentile that JESUS is the CHRIST, the ETERNAL GOD, manifesting himself unto all nations.

That is exactly what happened in the land of Mormon.

Renaming the Book of Mormon 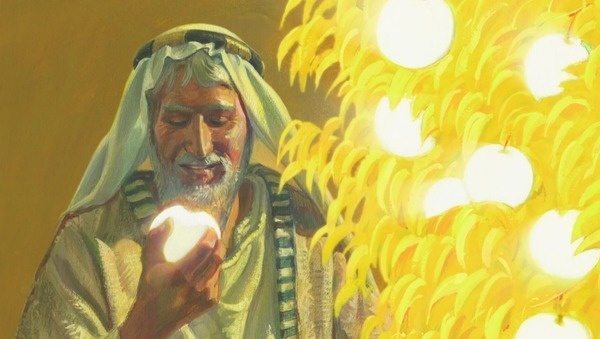 At the end of desire, questioning and pondering, and scripture study relying on the Holy Ghost’s instructions, my whole perspective on the Book of Mormon changed. The Holy Ghost vindicated the prophet Mormon from my confused judgment. No longer did the Book of Mormon feel just like a compilation of books. I really felt the fusion of its intent to ultimately manifest Jesus Christ to all who qualified.

Renaming the book from the book about a great guy to the book of man’s covenant quest for exaltation, surprisingly changed my relationship to it. I’ve always believed it was true. Unfortunately, somewhere, somehow, subconsciously, having another person’s name on the book made it less applicable to me. Now, seeing it for what it is revitalized my deep love for the book with a devouring hunger to understand and see every word on the page and every lesson in between the lines.

Wherefore, if ye shall press forward, feasting upon the word of Christ, and endure to the end, behold, thus saith the Father: Ye shall have eternal life.