Hasten Member Missionaries How to Keep our Promises to God (and How an App Can...

“Hope is an abiding trust that the Lord will fulfill His promises to you,” read Jacob Burdis.

He was a young missionary in Moscow, Russia studying Preach My Gospel. Missionaries all over the world were reading the same book, even that same line, but it touched Burdis in a unique way. This single line about promises gave him direction on where to find more hope.

That line of truth launched Burdis into a project: searching out the promises made in the Book of Mormon. Line upon line and promise upon promise, Burdis read the Book of Mormon for several months marking only the commitments God made, noting their conditions and the accompanied blessings.

“God makes promises throughout all the scriptures, I set out to know those promises so I could trust in them… it was all about gaining more hope,” said Burdis. 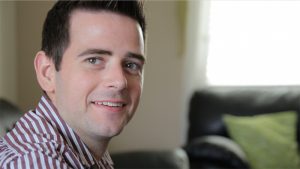 And hope was something Burdis was desperately needing. The first few months in the mission field bring their own brand of tribulations: leaving behind all familiarity, adjusting to a missionary’s schedule and lifestyle and adapting to a foreign place.

He was a nineteen-year-old American in Russia, trying to cope with these stresses along with other, more personal ones.

“I grew up a member of the church, but when I left for my mission things in my family were falling apart. It took a lot to leave, honestly, it seemed like staying home would have done more good,” said Burdis.

“I thought about my family a lot, that’s when I started specifically searching the scriptures for promises for families.”

Enter Doctrine and Covenants 118:3, a scripture with the hope Burdis needed.

“…Continue to preach from that hour, and if they will do this in all lowliness of heart, in meekness and humility, and long-suffering, I, the Lord, give unto them a promise that I will provide for their families; and an effectual door shall be opened for them, from henceforth.”

There it was, a promise. Burdis clung to it and served everyday believing in it.

“It was that scripture, it gave me hope and touched my heart. Blessings came and good things happened.”

For the record, this is a general rule. Good things happen when we cling to the promises of Heavenly Father and trust Him, especially with the things most precious to us.  Knowing the promises He makes, makes us more likely to keep them.

The experience sealed Burdis’ faith to the project, a project that, at that point, existed only within his own study journals. Burdis never lost the hope he had gained, nor the list of promises he had kept.

An Android App for Improving Book of Mormon Study 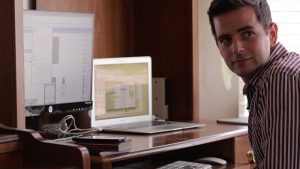 Years later, a Ph. D. course with the task of “learning a new technology” birthed an idea: arranging Burdis’ catalogue of promises into the LDS Book of Mormon Promises app, something any church member, or Christian alike, could use.

Finally, missionary journals proved useful for someone, somewhere. The notes and markings made years earlier were transcribed into the app, organized by “what I promise to do” and “what God promises me.”

“It’s ugly and it doesn’t look good…I’m not a developer by any means,” jokes Burdis.

Aesthetics have never meant much to God anyway; He looks upon the heart, and the heart of this humbly-designed app is profound truth.

With 30,000 downloads and a second edition in the works, the app is doing exactly what Burdis dreamed it would: inspiring hope. It’s a great guide in teaching Sunday School lessons or missionary work, but also for more personal, reflective moments in scripture study.

An anonymous Google user reviewing the app noted, “this is a great tool to help in your progression in keeping personal covenants,” and they’re right.

Constantly remembering and studying our personal covenants makes a pretty decent argument. There’s nothing more important –and no app that’s more useful– than something that will help keep us a little closer to God.

A Book of Mormon Reference Guide
But Burdis’ app wasn’t the end of his journey. The idea proved popular enough, that for Christmas, Burdis decided to print the information of the app into a book for family and close friends.  The printed hard copies grew into something for the general public; Burdis now sells them on Amazon. After all, not everyone is inclined to use an app and there’s something reassuring about a book on your shelf. 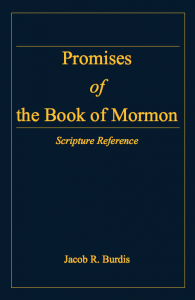 At 116 pages, the book is really a reference guide. As Burdis explains in the preface,

“This reference is not mean to replace your responsibility to diligently search the scriptures. Rather, it is meant to guide you towards a meaningful, fulfilling study and to point you to the miraculous mysteries found in the Book of Mormon.”

The book is available for purchase on Amazon and gives you a tangible guide to help tap into the power of the Book of Mormon.

A Way to Do Missionary Work
The promises really are powerful, by whatever means you find them. An example of this is the Facebook page Burdis maintains for the project.

Throughout last year, an unfamiliar name regularly liked his posts, which always feature a scriptural promise. After a few months, Burdis received a Facebook invitation to her baptism.

All along, the morsels of Book of Mormon truths posted on Facebook had warmed her heart. She sought out the missionaries and decided to be baptized. Knowing an online friend when she finds one, she invited Burdis to the event.

“I hadn’t even realized it could be a conversion tool at that point,” recounts Burdis.

We’re regularly encouraged to use technology for the betterment of the world, as a means to share and like and tweet the Gospel to every last corner. However, as time goes on, we need to be increasingly thoughtful and creative in how we do it.

“Anything that’s too much, or (has the appearance) of spam…people just hate it,” says Burdis.

There’s a greater need all the time to be thoughtful and specific in how we share the Gospel online, it’s all about being creative and unique in sharing our gospel experiences with the faceless masses of the Internet, just like Jacob Burdis did.

Burdis was a (full-time) missionary when the project started, and the project continues with missionary work at the heart of it. The beauty of God’s plan is that He thinks full circle, allowing us to grow with a purpose waiting for us at the end of every experience.

Just like Burdis’ scripture study project, that began as a way to meet his personal spiritual needs, has now found a bigger purpose years later, the time we dedicate to studying God’s word will always prove useful. For Burdis, this unexpected baptism was enlightening as to the power of Book of Mormon promises, made all the more powerful when they’re easy to find and understand.

Whether the app or the book, they’re a way to learn truths. These are the kinds of truths that can motivate change and inspire hope; they already have. The list of promises provide a lead for further study and revelation, because sometimes we just need a little guidance in arriving at Heavenly Father’s feet. This app is a way to get there.

“The promises in the scriptures gave me hope, they touched my heart. Blessings came and good things happened. I want people to know how you can find hope and how it can sustain you, through anything,” said Burdis.

A project based on the stuff of divinity and made with pure intentions is something worth praising…and even downloading.