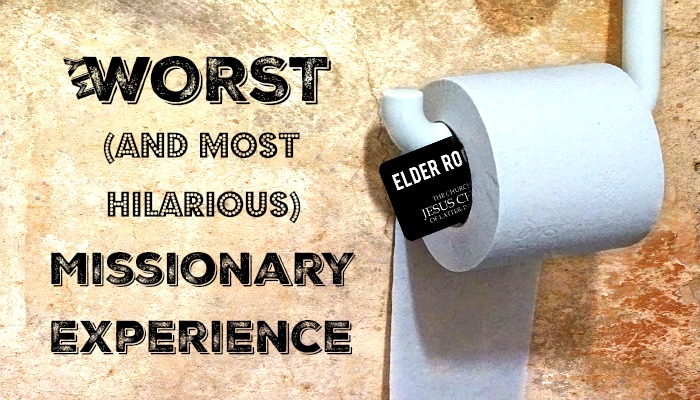 WARNING: This article contains graphic descriptions of unfortunate bathroom scenes that some may deem inappropriate. If you disapprove of bathroom humor, stop reading now. If you choose to continue, I hope you find some value in this horrific experience.

Like Joseph Smith’s multiple accounts of the First Vision, I too have struggled to find adequate words to describe what you’re about to read. I refer to it as the lowest point of my missionary service, but I feel a certain duty, as one who has “been there and back again,” to relate my experience to you.

Preface, or should I say … prefece (that’s foreshadowing)

Travel with me back in time to April 20, 2011. I found myself in the hot and barren wilderness of northern Mexico. I’d been there for five months or so. Our area of service was vast. It was so vast that one of the boundaries for our area was a mountain range. Along one edge, civilization itself seemed to have abandoned the land. It was towards that extreme that we traveled for the day’s lunch appointment. Two bus rides later we faced the first trial of the day. The home we were searching for was elusive. We traveled through a half-built, post-apocalyptic community under the broiling sun on our quest for their home, which we found about an hour or so later than our appointment had been.

The elderly couple we ate with had very patiently waited for us to arrive. They’d also allowed the food to patiently wait on the counter, which you really should never do with meat, as we later learned. It was a chicken casserole and a bowl of pottage (lentil stew) that ended up costing me much more than a birthright (I’m looking at you, Esau).

The meal was uneventful. We shared a gospel message with them and took our leave. Back into the desert towards the nearest bus stop. Into the Summer sun that became even more punishing once the most fricticious (that is now a word) parts of me began to chafe considerably. Every step was a trial of faith. But this isn’t a story about chafing. This is a story about what happened after.

Empowered by our calling to spread the good news, we worked diligently for the remainder of the day. By and by the time came to return to the place where we slept. I refer to it this way because it was far from a home. Hardly even a house. It was a concrete box that the sun beat down upon the entire day, which made returning to it every evening nauseatingly uncomfortable. But the nausea I began to experience was different this time.

We obediently did our nightly planning, and then I hit the sack. Our small bedroom featured two mattresses garnishing the gray concrete floor. I don’t mind not having a bed frame, in fact, I don’t have one today, but the lack of bed frame in this area of Mexico meant that the cockroaches had free range on your face while you slept, which I discovered the hard way. But I digress.

It felt like Kylo Ren was throwing a tantrum in the pit of my stomach. I hoped to sleep it off. It didn’t work. I awoke at about midnight, knowing instinctively that what I’d eaten for lunch was about to make a puke-tastic encore appearance—I was a ticking time bomb. I crawled out of bed and through the darkness towards the bathroom.

The bathroom’s pipes were arranged in such a way that when you flushed the toilet, the smell plumed out of the adjacent shower drain. Similarly, when you took a shower, the same ungodly odor would waft out of the toilet bowl. This essentially made the entire room a concrete bubble of nasty, 24/7. Your mere presence in this bathroom on a good day was almost enough to make you vomit. But it was not a good day.

I cradled the toilet bowl like a long lost child. But pleasantries were short. It was business time. I rose to my knees and braced myself against the toilet seat for fear of violently being thrown against the back wall by the sheer force of the loose firehose of acid chowder about to be unleashed.

And then it came. Every muscle in my body locked in place as my stomach began a full-scale evacuation. Ultron had arrived and Sokovia was in trouble.

In this, my most desperate hour, I contemplated my plight. A boy who struggled to speak the native language, living in a concrete box, hundreds of miles from home, a solid 19 more months of missionary service ahead of him, making a chunky sacrifice to the porcelain god in the middle of the night.

And then things went from bad to worse.

In the back of my mind, I realized that something warm was slowly dribbling down my leg.

If possible, a tear would have gently left my eye, traced its way down my face, and plopped onto the toilet seat below. But tears were out of the question. Every ounce of energy was dedicated to expunging my stomach of its contents, and once one has begun to vomit, stopping at will is an impossibility. That is as true as the Church itself. So when every muscle clenched to support the gastric evacuation, a horrific byproduct was an intestinal evacuation as well. At the same time. And little did I know that whatever had caused the turmoil in my stomach had also liquefied the contents of all 28 feet of intestine inside of me.

The recent turn of events had heightened my senses. My brain was firing on all cylinders as I considered every possible solution to the problem that had begun to soak through my shorts, but there was nothing that could be done. In slow motion I watched the reverse progression of my meals leaving my face, while whatever had made its way through the digestive process simultaneously exited out the back door. There was nothing I could do but just … let it flow. I have never felt more powerless.

There are several ideas floating around the religious world about what Hell really is. To some, it’s a fiery landscape with demons and pitchforks. Others think it’s simply a guilty state of mind. For me, it’s kneeling over a Mexican toilet at midnight, blowing chunks out of both ends of my body.

Eventually, time caught up with itself. The wave of spew subsided at both ends and my spirit re-entered my body. In a daze I flushed the toilet, despondently retired my horrified undergarments, and took a shower for obvious reasons.

I returned to bed. My missionary companion had remained sound asleep throughout the ordeal. As traumatic as the purge had been, the metaphorical dawn did come and the worst was over. The worst was over, but there was still plenty of “bad” to go around. I went back to bed, but awoke around 3 AM, ready for round two.

I had learned from my mistakes and repented of my lack of foresight. For round two I sat on the toilet, ready for the unexpected, and vomited into the shower. Again, the Double Dragon ensued (fire from both ends), but even the sub-par plumbing system provided what my shorts could not—a flush.

The next day I was diagnosed with Salmonella poisoning. A day or two after that, my incredible companion was transferred, and after only three weeks together it was up to me to show the new guy the ropes.

It was a time of struggle. A time of trial. A time of self-discovery. And I wouldn’t trade it for anything. Even that fateful midnight from Hell. Yes, the experience was beyond horrible, but it sure makes for a good story.

Every returned missionary has a bathroom horror story or two just waiting to be told. Share yours with us in the comments! I dare you.