Life Holidays Were the Founding Fathers Really that Special? 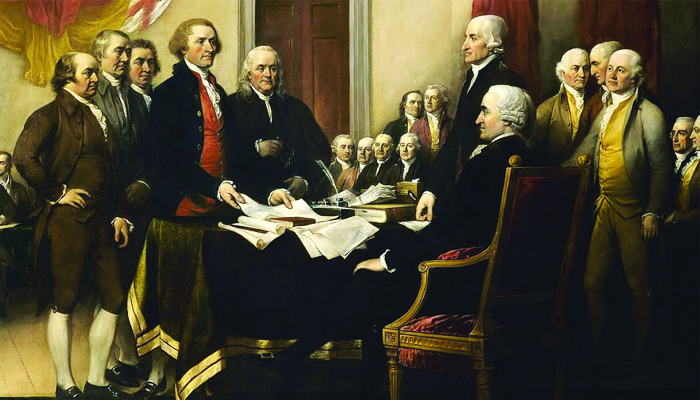 Today is Presidents Day, and we are in the midst of a movement to tarnish the reputations of many of the historical figures we used to admire. Many of the men we are now discrediting were founding fathers of the United States of America. This is occurring while schools are cutting back on the teaching of American history, social studies, and civics.

Because of this, many Millennials and members of the “Z” generation are focused on the present, which equals, in many cases, pop culture. Not understanding history is a dangerous thing. The quote from George Santayana is, “Those who cannot remember the past are condemned to repeat it.”

In addition to this, those who diminish the founding fathers and avoid studying American history lose sight of what makes America unique and exceptional. America becomes “not so great,” and its inspired representative government becomes replaceable by some other system.

Latter-day Saints believe in American exceptionalism because God has revealed that America is exceptional. In the Book of Mormon, we are told that this land is reserved to be a land of liberty for those who honor God:

Wherefore, this land is consecrated unto him whom he shall bring. And if it so be that they shall serve him according to the commandments which he hath given, it shall be a land of liberty unto them; wherefore, they shall never be brought down into captivity; if so, it shall be because of iniquity; for if iniquity shall abound cursed shall be the land for their sakes, but unto the righteous it shall be blessed forever (2 Nephi 1:7).

In the Book of Mormon, prophets predicted that America would be a nation wherein no kings would rule (2 Nephi 10:11-14). The people who would possess the land would be “free from bondage and from captivity, and from all other nations (Ether 2:12). The Gentiles were to be “established in this land, and be set up as a free people by the power of the Father” (3 Nephi 21:4). This, so that the Book of Mormon could come forth and the Lord’s Church be established.

And for this purpose have I established the Constitution of this land, by the hands of wise men whom I raised up unto this very purpose, and redeemed the land by the shedding of blood (Doctrine and Covenants 101:80; 109:54).

Related: 5 Reasons to Have Confidence in the United States of America

But What Do Historians Say?

Somehow it adds to our witness when the world agrees with us that America and the founding fathers were/are exceptional. Our most admired historians have researched through the whole of recorded history and have not been able to find anything or anyone like them.

Historian Barbara Tuchman wrote a book called The March of Folly. Her goal was to choose four astounding mistakes made by governing bodies from the beginning of history. She explained how very difficult it was to choose four utter failures to make wise decisions because history is rife with governmental blunders and blind leaders. She settled on the Trojan War, the breakup of the Holy See provoked by the Renaissance popes, the loss of the American colonies by Britain’s George III, and the United States’ own persistent mistakes in Vietnam.

In the introduction to her book, she explains how difficult it was to select these four failures and then tells us about the one, singular, bright light in the dark expanse of world history:

The product of a new nation, George Washington, was a leader who shines among the best.  While Jefferson was more learned, more cultivated, a more extraordinary mind, and unsurpassed intelligence, a truly universal man, Washington had a character of rock and a kind of nobility that exerted a natural dominion over others, together with the inner strength and perseverance that enabled him to prevail over a flood of obstacles.  He made possible both the physical victory of American independence and the survival of the fractious and tottering young republic in its beginning years.

Around him in extraordinary fertility political talent bloomed as if touched by some tropical sun.  For all their flaws and quarrels, the Founding Fathers have rightfully been called by Arthur Schlesinger, Sr., “the most remarkable generation of public men in the history of the United States or perhaps of any other nation.”  It is worth noting the qualities this historian ascribes to them: they were fearless, high-principled, deeply versed in ancient and modern political thought, astute and pragmatic, unafraid of experiment, and—this is significant—“convinced of man’s power to improve his condition through the use of intelligence.”  That was the mark of the Age of Reason that formed them, and although the 18th century had a tendency to regard men as more rational than in fact they were, it evoked the best in government from these men.

It would be invaluable if we could know what produced this burst of talent from a base of only two and a half million inhabitants…. the Founders remain a phenomenon to keep in mind to encourage our estimate of human possibilities, even if their example is too rare to be a basis of normal expectations (The March of Folly: From Troy to Viet Nam, 18, 19).

This Presidents Day let’s realize how blessed we are to inherit the results of the Lord raising up this group of men. We don’t have to be Americans to have partaken of the gifts of the founding fathers’ great work, sacrifice, and example.