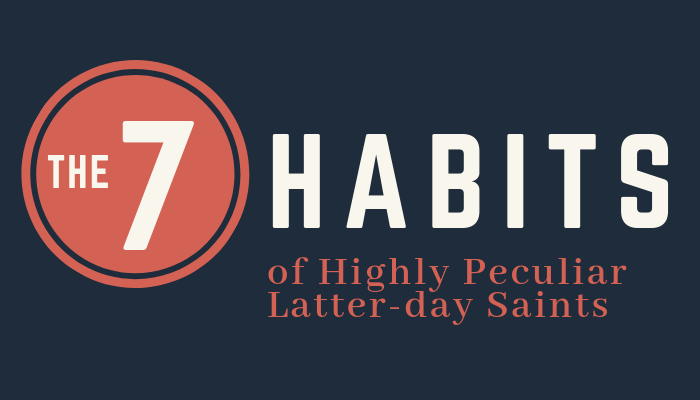 The scriptures refer to us as a “peculiar people” for a reason; sometimes we do things that don’t make sense. Even within the Church we catch ourselves doing things that probably aren’t considered “normal” by the rest of our congregations. If you do any of these seven things, you might be a highly peculiar Latter-day Saint.

1. Be the epitome of the phrase “LDS Standard Time”

We’re all guilty of being late to church. In fact, just a few weeks ago on my first Sunday in a new ward, I walked into sacrament meeting half of the way into what I thought was the opening hymn. Sadly, it was actually the closing hymn. I don’t know if you can get any later than that honestly. But just because we struggle with being on time — maybe you even struggle every Sunday — doesn’t mean we shouldn’t try to be better. Doctrine and Covenants 132:8 states:

“Behold, mine house is a house of order, saith the Lord God, and not a house of confusion.”

Arriving late to various church meetings or starting them late probably wasn’t what God had in mind when he gave us this revelation. Luckily for us, God doesn’t expect perfection in this life. We will all just have to keep trying — and likely failing — to make it to things on time.

No one is saying you shouldn’t share the gospel, and social media can be a great tool for doing so. However, there might such a thing as oversharing, at least on social media. If 80 percent of your posts are quotes from the apostles, though, then your social media presence might be considered a little peculiar even by your fellow Latter-day Saints.

In other words, you don’t have to go out of your way to wave a figurative flag around that states all your beliefs; you can actually share the gospel by being your normal self. Simply start sharing more about your personal life and the way you live. You don’t need a slew of LDS quote memes — although you can’t a good Uchtdorf plane meme — you can let Christ shine through you and the comments, captions, and photos that you post.

3. Use the phrase “Good Latter-day Saints don’t [insert something that isn’t doctrine]”

It’s pretty peculiar when we try to go against what Jesus said was the second great commandment (loving others), and we judge others in the Church. Sometimes, it’s just really hard to get past what we’ve been raised to think of as things that “good members” do and those that “bad members” do. I — like I think most normal people — have had judgy thoughts pop into my head; however, the important thing is what you do with those thoughts.

If you’ve read or listened to Dieter F. Uchtdorf’s talk “The Merciful Obtain Mercy,” you know he said that we need to “stop it!” when it comes to judging others.

“It’s that simple. We simply have to stop judging others and replace judgmental thoughts and feelings with a heart full of love for God and His children.”

So, if a thought like “A good Latter-day Saint wouldn’t wear those shorts” comes into your head, combat it with Elder Uchtdorf’s words and tell yourself to “stop it.”

4. Bear a “testimony” that’s not really a testimony

We’ve all been in a testimony meeting where a child overshares some personal family details or an adult says something we’re pretty sure isn’t doctrine. Most of us agree that these examples aren’t really testimonies; they’re just some peculiar things that happened to be shared over the pulpit. What we don’t realize is that sometimes we also get up there on Fast Sunday and what we end up saying doesn’t really qualify as what the church website defines as a testimony:

A testimony is a spiritual witness given by the Holy Ghost.

What a testimony isn’t: a long drawn out story about something that happened to you during or how much you love your family. Instead, talk about the principle or doctrine you gained a witness of during that experience or how you know God created eternal families.

Everyone, from the newest convert to the prophet, has received a spiritual witness of something. Maybe you have a strong testimony of the Atonement because you’ve used it, or perhaps you read the Book of Mormon, prayed to know if it was true, and received a strong affirmative answer. Whatever your testimony is, share it!

5. Fish for answers when teaching a lesson

This is not what Jesus had in mind when he said “I will make ye fishers of men” (Matthew 4:19). If you’re applying this scripture to your personal life in this manner, then you might be approaching the title of “highly peculiar”.

We’ve all been in a Sunday school class where the teacher is apparently trying to get us to read his or her mind. Various people will give out answers until everyone in the class is just waiting for the teacher to put them out of their misery and give them the correct answer.

Instead, focus on facilitating discussions in classroom settings. This allows members of a class to learn from each other. Doctrine and Covenants 50:22 states”

“Wherefore, he that preacheth and he that receiveth, understand one another, and both are edified and rejoice together.”

When all class members are involved in a meaningful way, they uplift each other. And for those of us who don’t love teaching lessons, class discussion is a great way to eat of time!

6. Believe desserts will nourish and strengthen you

Believing that a “salad” made from whipped cream, Snickers bars, and apples (I assume this one fruit is how we’re qualifying this dish as a salad?) is going to nourish and strengthen our bodies might be one of the most peculiar things we do. Especially, when we have a whole chapter of the Doctrine and Covenants that cover health guidelines. For now, maybe we can just hope part of being a resurrected being will be not having to eat our vegetables.

Let’s face it, using “Where did you serve your mission?” is a pretty peculiar way of breaking the ice. Especially since there’s plenty of active, worthy members who did not serve missions for various reasons, and assuming they did serve a mission just makes things awkward for everyone. It’s like asking someone where their favorite burger joint is ad having them respond by saying they’re vegetarian.

Similarly, assuming that someone who came home from their mission early must have committed a huge sin is also a big “no no.” There are a variety of physical, emotional, and mental issues that can render a person incapable of completing their mission how they would have liked to.

Instead of making assumptions, we can try to get to genuinely know the people around us. If someone does come home early from a mission or is unable to serve one, then we can over support and a listening ear when appropriate.

If you’ve made it this far and you don’t have any of these habits, don’t worry — you’re probably peculiar in some other way. Just make sure whatever habits you have aren’t missing the mark. If the habits we have right now aren’t helping us along the path to exaltation, then we’d be pretty peculiar not to break them. As Stephen R. Covey says in his book “7 Habits of Highly Effective People,” we should “Begin with the end in mind.”