Faith Defending the Faith Never-Before-Seen Letter on Doubt By Hugh B. Brown 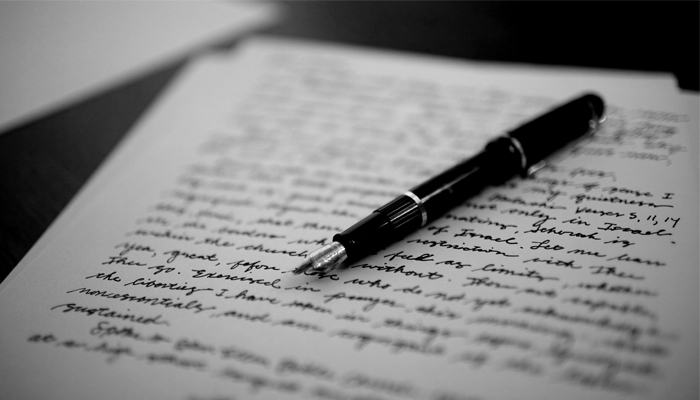 Hugh B. Brown served as an apostle, and later, as a member of the First Presidency of The Church of Jesus Christ of Latter-day Saints. Before that, he worked for a short time as a professor of religion at Brigham Young University. While there, he received a letter from a close friend who was experiencing what is now commonly called a “crisis of faith.” The advice he gave nearly seventy years ago has never been published, but is still pertinent to us today as we all struggle to “keep the faith.”

I was really glad to get your letter of October 25, and I appreciate your confidence. The revelation of your mental and spiritual struggles does not come as a surprise, as I had felt for some time that the waters of your usually placid soul had become somewhat roiled and disturbed.

Would you be surprised if I should tell you that I, too, have had periods of perplexity, uncertainty, and doubt; that I, too, have known the darkness, fogginess, and chill of the valley which lies between illuminated peaks of faith and confidence, and that only the memory of the hilltops along the road over which I have come coupled with the somewhat misty vision of others still ahead has given me the courage to plod on when I was tempted to “chuck it all,” to wrap myself in the comfortless blanket of doubt and self-commiseration and just quit the field. Well I have had that experience. But this I can say positively, that each peak which I have climbed has seemed higher and more inspiring than the last, due at least in part, I think, to the dark background of the valley through which I came. Sharp contrasts are sometimes most revealing.

In view of the above admission, you will not expect an argument or a brief on faith in God and immortality. However, and I hope it may be so, a relating of some personal experiences and observations may give you a fellow-feeling and bring comfort, courage, hope, and faith, may renew in you the spirit of adventure, of zest for the quest of truth.

First, I have found that periods of doubt and skepticism, of negative reactions and disbelief have always been characterized by darkness, refrigeration of spirit, pettiness, cynicism, and general misery, even to a point of wishing for oblivion. Whereas, periods of faith, hope, and positive reactions have been times of buoyancy and cheerfulness filled with a desire to be and to become, to lift and encourage, and to point with confidence to something even more about to be. Here, life had cadence and lilt and zest and value, and I gloried in the thought that I could extend these benefits and joys and possibilities to my children.

From the selfish standpoint of personal satisfaction then, I have chosen to swim in the clear, cool stream of faith rather than wallow in the turbid, enervating, stagnant swamp of doubt and cynicism. In other words, faith pays dividends of joy as we go along.

I like Fosdick’s definition of faith: “Faith is vision to believe what as yet one cannot demonstrate and valor to act on the basis of that insight.”

At times I have had to take myself in hand and command my knees to bend, my head to bow, my spirit to become contrite. But of this I bear witness, that I have beheld more distant vistas when on my knees than when standing upright. Somehow the bending of the knee has seemed to open the shutters of the soul and to bring the lens of faith into focus.

Many more before you and I have wondered if praying were not merely a soliloquy and its only answer the echo of its sound. On the other hand, however, prayer has been a vital principle–the central faith of millions of noble men and women. The fact that it has been an age-long rapture certainly attests its value–it endures. It’s faithfully recurrent like the sunrise. It’s not a private vagary nor is it mere wishful thinking or rationalizations. I have come through my own experiences with the conviction that prayer is comradeship with God; indeed, I doubt if I could have endured some recent experiences if I had not had that refuge.

As to whether there is in fact a God, I shall not argue. But I, like you, have looked about me and seen the myriad evidence of plan and purpose and design and have chided myself for ever doubting the existence of the Designer.

I am told, and there seems to be ample evidence to support it, that matter is indestructible, that it is eternal. As a youth, if I had been told by my teacher in school that the desk on which I wrote was indestructible, and then when the schoolhouse burned had seen the mocking ashes where my desk had been, I doubtless would have lost faith in my teacher. Clearly, and before me, was the evidence of his folly. But later in High School and University, where in the laboratory, I learned how to catch and weigh the gases, oils, and ashes that resulted from burning wood and found that the process of burning had not in fact destroyed anything, I concluded that my youthful skepticism was but evidence of the narrow limits of my knowledge. From then on, humility bade me hesitate before questioning the truths which witnesses of research and observation had established. My questing soul still questions, but my questions had to do with ways and means of deciphering and getting at the truth and finding the relationship between observation and intuition, between knowledge and faith.

There are many things I cannot explain, there are many things I cannot understand, but of this one thing I am positively sure, that God does live, that death will not end my conscious existence. I cannot bring myself to believe that while my desk, mere inanimate matter as it is, is indestructible, that far more valuable, in fact the most valuable thing I know, human personality and love, is but transitory and temporary and must be destroyed and come to an end when I cease to react physically to my surroundings in this world.

The little logic I have mastered, what little knowledge I have gained forbids me to accept the hypothesis that individuality will entirely be wiped out.

Just why God does not move closer to me or enable me to come closer to him, that through my physical senses I may apprehend him, I do not know. But this I know, He has so tuned my spirit that I am sensitive to and respond when certain impulses emanate from Him.

I assume that if the unborn babe could speak, he would rebel at the prospect of birth; he would say, “I cannot live if you take me out of my present environment beneath my mother’s heart. My life is so definitely a part of her life that if you separate us I am sure I will die and cease to be.” And yet, that babe, when born, finds himself in an environment suited to his undeveloped organs and functions. He finds that someone has made provision for his coming, that there is water and food and air to satisfy his stomach and lungs which, though present, were not needed in his pre-natal state.

I wonder if when we die, we are in fact just born into another sphere. Personally, I am quite content to leave the outcome with the same good God who made provisions for my coming here, and personally I believe that I might have certain spiritual organs which will function fully only when I am born into an environment suited to them.

Well, this letter is already much too long. I promised at the beginning that I would not argue, and yet I fear that I have verged at least onto the edge of argument. I want you to know, my dear son and brother, that I am intensely interested in your future. I believe that the violent attacks that have been made on your faith, upon your reasoning powers, upon the hope you have held in the past were made as a test. I firmly believe that you have an unusual future, and that because of your possibilities, the Adversary, and I think there is an Adversary, is making a determined attack upon you. I know you too well to feel that you will give up and quit the field while that attack is on. I counsel you to assume the positive attitude in your talks to others, that you undertake to convince them of the reality of the things in which you have believed, that you search for evidence to support that faith, and I think you will be surprised to find that there is far more evidence in support of faith than can be marshalled to support the negative side.

I look forward to the time when we can visit again, and hope it may be possible to get together often, as I have appreciated your comradeship and association in the past. My love to your wife and baby and to you, and may God bless you to see through the fog and glimpse the sunshine.

Sincerely your friend and brother,

A note from Steve Densley, Jr. regarding provenance: I received this letter from my grandmother. She was Hugh B. Brown’s secretary when he was a professor at BYU. She was asked to transcribe the letter and send it to the original recipient. She loved the letter so much that she asked if she could make a copy for herself. Hugh B. Brown agreed to let her keep a copy on the condition that the name of the person be removed. A scanned copy of that letter is posted here at the link below. Readers will see that after the signature line, it indicates that it was transcribed by ‘mld’, which stands for Mary Lou Dixon, the maiden name of my grandmother, Mary Lou Taylor. Readers will also see that there is handwriting on the first page. That is from my grandmother. It says, “Lost Faith in God Immortality and ready to chuck it all.” Minor corrections have been made within this article to improve readability.

Listen to a podcast about the Hugh B. Brown letter 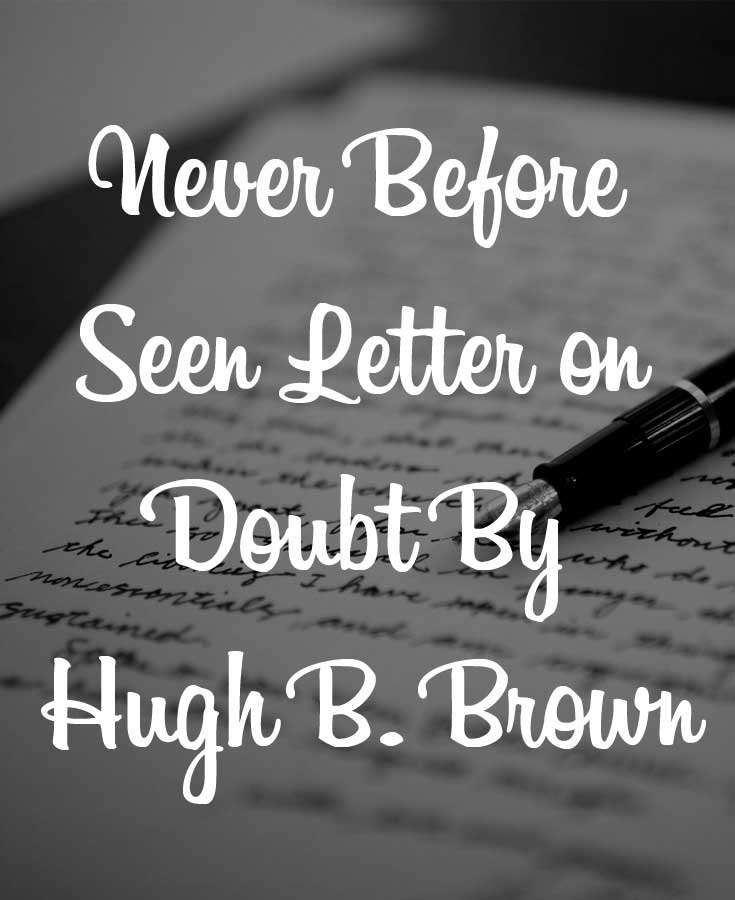 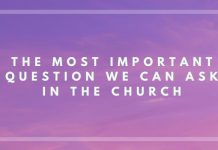