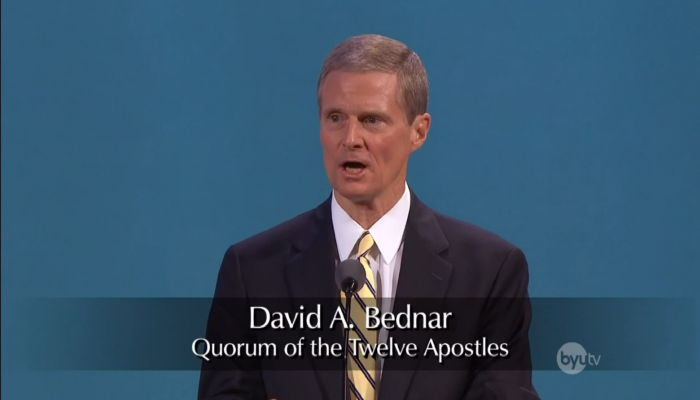 In today’s BYU devotional address, Elder David A. Bednar delivered a groundbreaking speech clarifying the Church’s position on the use of Social Media to share the gospel and the availability of church media for online member missionary work. Also announced was the launch of a new official website social.churchofjesuschrist.org.

Notably, it was announced that content on the Media Library of LDS.org is freely available for use in sharing the Gospel online.

We are pleased to announce that the content available on the media library on LDS.org unless otherwise indicated has been cleared for use by members without seeking permission from the church.

This is a significant announcement as it lowers the barrier for members who would like to share Gospel messages but do not have media creation skills or resources.

The presentation was media rich with large displays and supplementary media adding to the speech.

Technology In the Fullness of Times

His first topic centered upon the unique time we live in and the many prophecies that have pointed toward these days. He shared a quote from Joseph Smith illustrating the importance of the dispensation of the fullness of times:


For this reason the rolling forward of the latter day glory even the dispensation of the fullness of times ‘is a cause that has interested the people of God in every age; it is a theme upon which prophets, priests, and kings have dwelt with peculiar delight; they have looked forward with joyful anticipation to the day in which we live; and fired with heavenly and joyful anticipations they have sung and written and prophesied of this our day.’

Each time the gospel has existed on the Earth there has been a “dispensation head” which is essential for each dispensation. In our day the Prophet and Apostles have instructed us to use technology to share the gospel to all the world.

Bednar quoted past prophets who spoke about the use of technology and the inspired purposes in their creation. He shared this quote from Brigham Young: 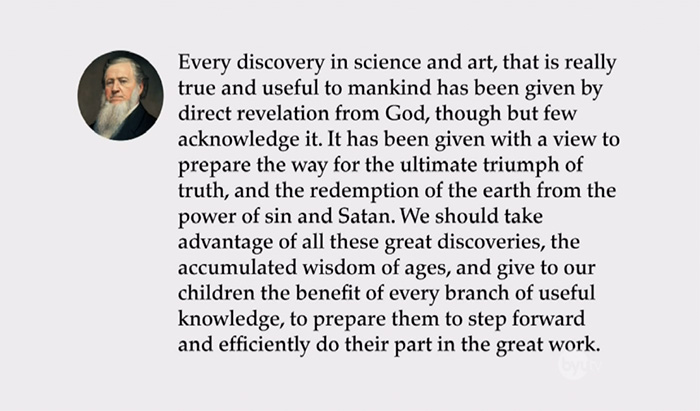 [quote_right]All of these advancements are part of the Lord hastening his work in the latter days.[/quote_right]

He shared other thoughts by David O. McKay, Gordon B. Hinckley, Spencer W. Kimball, Joseph Smith, L. Tom Perry, and even his own past comments. He said, “All of these advancements are part of the Lord hastening his work in the latter days. His message invited members to recall the words of modern and ancient prophets to realize the importance of this time and the need to use technology to spread the Gospel.

According to Elder Bednar, the use of technology for full-time missionaries will continue to increase, “40% of our missionary force soon will be using digital tools”. And as technology use spreads, the need to leverage social media is also more important. “Social media…is playing an increasingly important role in the work of salvation”.

Bednar continued his remarks on social media by sharing the growth and dominance of social tools. He indicated, “The popularity and reach of current social media tools are staggering”. From there he shared statistics on the monthly usage of 5 social platforms: Facebook, Twitter, Pinterest, YouTube and Instagram.

Bednar recognized the growth of social networks as a divinely available resource suggesting that “It is no coincidence that it is happening in the dispensation of the fullness of times”. He encouraged members to see the hand of God in bringing forth these tools and suggested that he “believes it is time” to share the gospel using social media.

Filling the World with Good Feeds

The Church of Jesus Christ of Latter-day Saints has launched several successful social media campaigns. Elder Bednar highlighted a few of them to further reinforce the point that social media can be a powerful tool in spreading the gospel. The first he highlighted was the #BecauseofHim campaign launched just before Easter earlier this year. The video has been viewed over 5 million times by people around the globe.

He mentioned other social campaigns including #IPrayWhen, bofm365 and the introduction of the #ldsconf hashtag. With the #IPrayWhen campaign, people on social media were asked to write when they pray and post a picture of themselves holding pictures. The campaign “Led to 40,000 conversations about the need for prayer”.

Bednar also mentioned the new Twitter accounts for the First Presidency and Quorum of the Twelve Apostles. He humorously admitted that some are more active than others by suggesting, “Additional members of the 12 may be active on Twitter in the future”.

The Church of Jesus Christ of Latter-day Saints will also soon release a new movie designed to expose the world to Mormon life, culture and beliefs. The film is called Meet the Mormons and a trailer was released to give an idea of what the movie will be like. The film will be released in theaters, visitor centers and online.

He finished his talk with some strong counsel on how to use social media effectively and safely. Elder Bednar identified 4 tips:

Too much time can be wasted, too many relationships can be harmed and destroyed…These perils are real but so too are the possibilities…Digital technologies should be our servants, not our masters…We need not become social media experts or fanatics

He also focused on the positives and sought to inspire members to remember Enoch’s words, “And righteousness and truth will I cause to sweep the earth as if with a flood”. Bednar suggested that if members use social media tools effectively they can “Transform the trickle into a flood”.