Everyone was dressed in their swankiest of duds — long black dresses, tuxes, the occasional three-piece suit. I felt like I had mistakenly opened the door to a Hollywood award ceremony rather than a boxing match, but there I stood, gussied up just as much as the rest of them. I scanned the folded sheets of paper slipped over the backs of seats, looking for my place: Mitt Romney, Senator Cotton, Congressman Stewart, Congresswoman Love, Attorney General Reyes, a large section marked “The Romney Group.” I claimed my seat in the back with the rest of the nameless media faces. 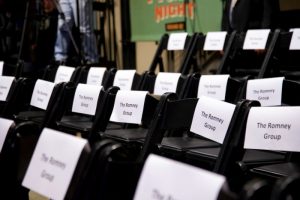 The organization hosting the event, CharityVision, is dedicated to providing restorative eye-surgery training to doctors in impoverished areas. Over 90% of those who suffer from blindness live in developing countries and every minute, a child goes blind. For every $25 donated, one surgery is performed, and the goal of the night was $1 million — that’s 40,000 surgeries. CharityVision thinks big when it comes to fundraising, which is why they teamed up with Golden Boy Promotions to think outside the box and inside the ring to organize the night’s event.

And So the Fighting Began

David “Junebug” Mijares took on Cory Vom Bauer, getting a TKO about a minute into the third round. The crowd tepidly cheered as the emcee attempted to pump them up with the promises of free tee shirts. It took the scrappy fighting of Joshua Franco and Sam Rodriguez to get the crowd really shouting. Every blow Franco delivered sent spit and sweat showering down from Rodriguez’ worn-out face. The fight lasted the whole 6 rounds, Franco beating Rodriguez down to the edge, only to have Rodriguez roar back up again, landing fierce right jabs into Franco’s side. The audience erupted, shouting instructions to the athletes, each individual taking on the role of “boxing-fan” for just a moment.

The judges declared Franco the winner, the audience clapped and hollered, and the night continued on.

The President of CharityVision, Josh Romney, stood up — well, more like “leaned” up due to an Achilles injury — and directed our attention to the screens placed above the ring. A video began playing, and a mother told the story of her three blind children and their life-changing journey to sight, with the help of CharityVision.

That’s really why they all gathered there that night as spectators for a sport most of them usually don’t spectate — especially not decked out in their finest attire.

Something about that Luchador…

Then the “real” fight began.

“Super” Mario Lopez entered the ring in red shorts. The emcee introduced him, throwing in the obligatory “Saved By The Bell” reference. The audience, sufficiently warmed up by this point, chuckled heartily. Oscar De La Hoya then entered the ring, his massive, golden belt held high by a member of his crew. The emcee introduced him, noting his impressive boxing record and Olympic gold medal.

They began sparring, De La Hoya, the old champ, pacing himself against the younger, significantly-less-experienced Lopez. From the viewpoint of a non-boxer, it didn’t seem like De La Hoya had to exert any energy at all. The two jabbed, blocked, and pranced around each other, Lopez making use of the “fancy footwork” he picked up on dancing with the stars. But even then, Lopez was no match for De La Hoya, and with 20 seconds left in the last round, things were looking grim. Then something odd happened…

Lopez tapped out, and in his place stood a Luchador, masked in gold. De La Hoya also tapped out and now there was an acrobatics display in the middle of the ring.

They fought, flailing through the air, doing flips and spins and body slamming each other from the posts. One of the men was on the brink of de-masking the other. Then, occurred what was arguably the highlight of the evening. A man in a Nacho Libre-esque luchador costume rushed the stage. 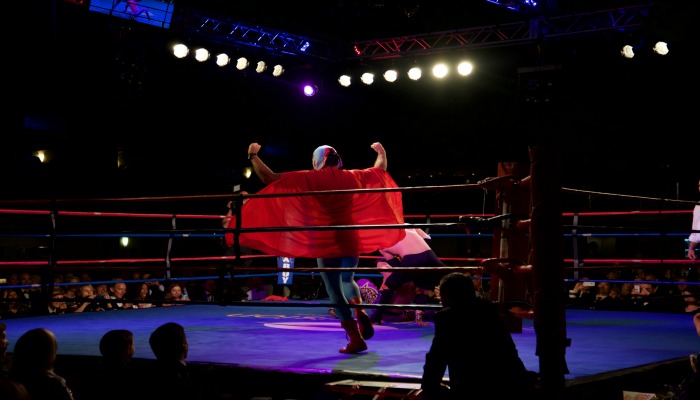 It was former governor of Massachusetts, Mitt Romney. 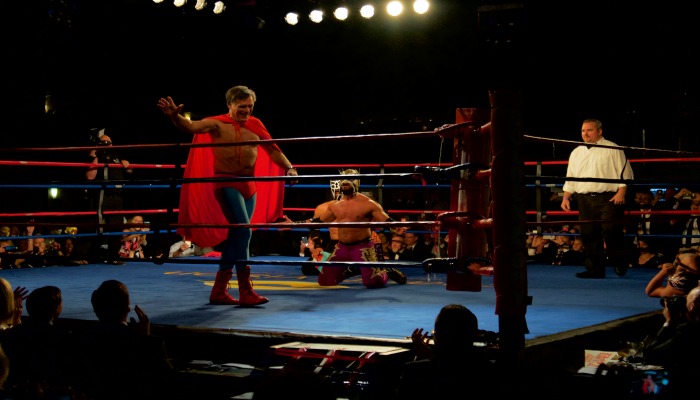 The night was everything it promised to be and more: fancy, exciting, and sometimes downright strange.

And that’s the beauty of an event like this; people are willing to let themselves go, assume unfamiliar roles (boxer, fan, luchador), and give themselves entirely to a cause. The attendees were brought together by a common interest — sight and a future for those in need — to engage in an uncommon interest — watching Mitt Romney beat-up luchadors dressed as Nacho Libre. In the end, the world becomes a brighter place for the thousands of lives CharityVision will touch and I got to see Mitt Romney in blue spandex. It’s a win-win.