LDS.net’s Mormon Minute recaps LDS news that happened during the week in the Mormon world. This week, we talk about: Elder Perry’s release from the hospital, members of the Church helping people in Johannesburg, South Africa, President Monson’s ranking as an influential Christian leader, and more.

Yesterday afternoon LDS Church spokesman Eric Hawkins announced that Elder L. Tom Perry was admitted to the hospital for tests after having difficulties breathing. Later that evening, Perry was released from the hospital to rest at his home.

People in Johannesburg, South Africa were forced to seek shelter after violent attacks on foreigners. Working alongside the primrose Methodist church, members of The Church of Jesus Christ of Latter-day Saints helped prepare food for 2,000 people at different refugee locations. The area presidency also confirmed that all missionaries and members in the area are safe.

President Thomas S. Monson was named one of the top 100 christian leaders of 2015. Coming in at number 13, Newsmax says their list included leaders who are making a real impact on modern lives. Other people included the creators of the television bible series, televangelists, and even several politicians.

And Mormon Channel’s newest happy family shares their experience of having a blended family while striving to live by the motto ‘love is key.’ 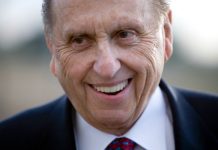