What does former Utah Senator, Orrin Hatch, have to do with the recent uproar about the Hatch Act? The answer: absolutely nothing.

What is the Hatch Act? 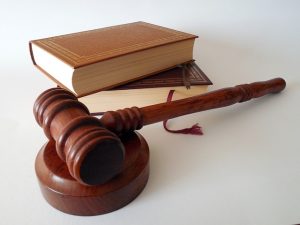 The Hatch Act was named after democratic Senator Carl A. Hatch, who sponsored the act. It was created in August 1939 in order to”prevent pernicious political activities.” The act states that restricted federal employees are not allowed to “use official authority to interfere with an election or while engaged in political activity.”

Senator Carl Hatch was a democratic senator from New Mexico. Franklin D. Roosevelt was president at the time the act was created. The most recent possible violations of this law have occurred under the leadership of President Trump.

People criticize the administration for not firing those in violation but, violations of this law have occurred in previous administrations without consequence. The New York Times stated that “while violation of the Hatch Act was intended to be a fireable offense, that outcome has been exceedingly rare in modern politics.”

Why the recent uproar?

The Republican presidential nominee, current President Donald Trump, was perceived to be in violation of the Hatch Act because he chose to hold his convention at the White House instead of another more neutral location.

Technically, the act excludes the current president and vice president from its effects, but the public wonders how President Trump could have broadcasted a national convention without the help of multiple federal employees.

What does Senator Hatch have to do with it? 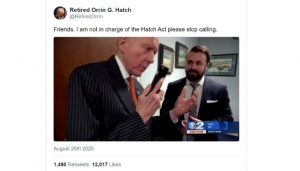 The recent uproar has caused many voters to call the office of former Senator Orrin Hatch. He would like to make it abundantly clear that he does not have anything to do with it.

Because Orrin Hatch, a former Utah senator, served in the United States Senate for 42 years, it is easy to assume that he may have had something to do with it. But this Senator Hatch did not begin his public service until 1977. That is just shy of 40 years AFTER the act was created.

Senator Hatch retired in 2019 and now holds the title of the longest-serving Republican senator in United States history.

Orrin Hatch grew up in a poor family in Pittsburg, Pennsylvania. He did not come from money the way that many career politicians do. Senator Hatch is a life-long member of The Church of Jesus Christ of Latter-day Saints.

As a young man, he served a mission for the Church in the Great Lakes States Mission. At the time it encompassed parts of Indiana, Michigan, and Ohio. He has served in many church callings including the role of bishop.

He married Elaine Hansen in 1957 while he was attending BYU and the couple later welcomed six children. Hatch continued his education at the University of Pittsburg School of Law. While he was in law school, his young family lived in a chicken coop.

After completing law school, Hatch began to practice law in Pennsylvania and later moved to Utah to practice law there. His political career is not the only area in which Hatch has found success. He is also an accomplished LDS composer, lyricist, and musician.

Senator Hatch wrote and preformed “My God Is Love” in 1997 and “Heal Our Land” with Janice Kapp Perry in 2005.

Although he is a member of the Church, he also wrote the lyrics to “Eight Days of Hanukkah.” With this song, Hatch added upon a shortlist of Hanukah songs. He is also a member of the board of directors of the United States Holocaust Memorial Museum.

Did you know this about the former Utah Senator? Share in the comments