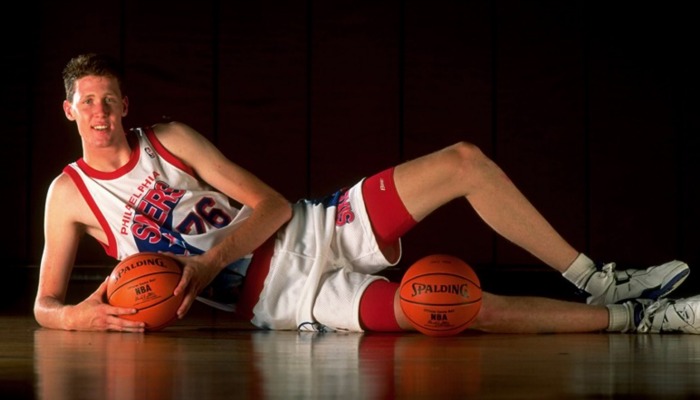 At 7 feet and 6 1/4 inches, it was thought “Stormin’ Mormon” Shawn Bradley would revolutionize professional basketball. However, after a career plagued by inconsistency, the larger-than-life NBA player became the poster boy for getting dunked on.

The “Enormous Mormon” (Bradley’s other pseudonym)  was second pick in the 1993 NBA Draft. As a high school student in the small town of Castledale, Utah, Bradley was one of the most successful ball players in state history. He was named All-American by various publications, including USA Today, Parade Magazine, and Street and Smith. Bradley ended his high school career with averages of 20.3 points, 11.5 rebounds, and 5.4 blocked shots per game.

Shawn Bradley went on to Brigham Young University, where he led the nation in total shots-blocked (177). As a college basketball player, Bradley received praise and titles for his achievements. He was named Western Athletic Conference (WAC) Freshman of the Year, and received All-WAC defensive team and newcomer team honors. The Associated Press even included Bradley as an honorable mention for the All-American title.

After freshman year, Bradley served his mission in Australia. Upon returning, he chose to forego a college basketball career, instead jumping headfirst into the 1993 NBA draft.

During his professional career, Bradley played center for the Philadelphia 76ers, New Jersey Nets, and the Dallas Mavericks. After racking up 274 rejections for Philadelphia, the “Stormin’ Mormon” set the franchise record for most blocks in a single season. Playing for the Nets, he became the first player in NBA history to record consecutive games of double-figure blocked shots twice in a single season. As a Dallas Maverick, Bradley became the fifth NBA player to record a minimum 20 points, 20 rebounds, and 10 blocks in one game.

But Bradley’s success was tainted by inconsistency. His lanky frame never quite filled out as coaches had hoped, making Bradley a moving target on the court.

In a recent 30 for 30, ESPN tracks down the now retired Bradley to take a look at his past career, and his life now.

The former NBA player’s countenance is humble as he unabashedly confesses that the critics were right: basketball is not his number one thing. “It never has been; it never will be. I value my family and my religion as number one.”

His dedication to his faith was exemplified when the entire team was scheduled to meet at a club. A little research showed Bradley the club was not only for drinking but was a strip club. He called team management and told them they should know he wouldn’t show up to a venue like that. Management told him he’d be fined $10,000 if he didn’t show. Bradley felt it was a small price to pay to stay true to his values.

ESPN’s 30 for 30 episode makes that clear. Bradley’s faith comes out on top every time.