Faith Belief 6 Mormon Teachings That Make Me Want To Fist Pump And Yell... 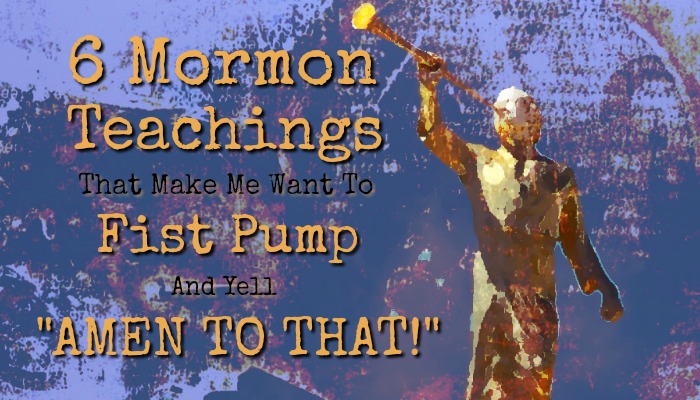 Mormons sure are one of a kind. They’re recognized worldwide for some of their stranger, unorthodox beliefs, but when you really dive into some of those beliefs … man … they make me want to fist pump and yell “AMEN TO THAT!” Here are just six of those beliefs:

The Bible is great, y’all. It’s chalk full of great history, revelatory instruction, and tells the story of the life of our Savior, Jesus Christ. But when Mormons say God had even more to say to us …

The Bible is evidence of thousands of years of God’s interaction with us mortals. It’s not like God just peaced out after 95 A.D. because He didn’t have anything left to say than what had already been said. Just because some people got the great idea, “Hey, let’s take all these important writings and put them all together in a book,” doesn’t mean that’s the end of it. Can you imagine if J.K. Rowling just stopped after The Sorcerer’s Stone? OK, bad comparison, but you get the gist.

There’s so much more scripture available, and everyone needs to read it. The Holy Bible, The Book of Mormon, The Doctrine and Covenants, The Pearl of Great Price, now that’s what I’m talkin’ about. And speaking of additional scripture…

*Mormon missionaries stop me in Walmart*

“God loves you, He listens to your prayers, and communicates with you personally through the Holy Ghost. Oh, and He still calls prophets today just like He did in ancient times, and He’s giving revelation to them, too. God is not a silent observer of our lives. He’s very much involved.”

3. Baptisms for the Dead

The Bible states very clearly that, “Except a man be born of water and of the Spirit, he cannot enter into the kingdom of God.” AKA, baptism is essential to salvation.

K, but what about all my pagan ancestors that never even heard the name “Jesus” or had the opportunity to be baptized during their lifetime?

What about all the people living in countries whose governments ban Christian missionaries?

What about that guy who had his baptism scheduled for Saturday but died in a tragic accident on the way there?

Are they all cruising down an eternally construction-laden one-laned highway to Hell?

Da dada DAAA—Mormons believe in what they call “baptisms for the dead” (the apostle Paul called them the same thing in 1 Corinthians 15:29). Don’t freak out, they don’t go around baptizing corpses. Instead, they have living people get baptized on behalf of those that have passed on. Those individuals then have the opportunity to accept that vicarious baptism as their own, or not. Pretty sweet, right?

What?! I can be sealed for time and all eternity to my spouse and family? YES PLEASE. Mormons believe that “The family is central to the Creator’s plan for the eternal destiny of His children.” Eternal destiny. Familial relationships (especially marriages) are meant to last well beyond physical death. Sealing marriages and families for eternity is one thing Mormons do in their ever-so-awesome temples. Gosh, that’s got to be the most romantic thing I’ve ever heard. And it’s true. Boo-ya.

This one rocks my socks right off. No socks on these feet anymore. But I digress. Many traditional Christian sects (but not all) believe that in heaven we will enter “a state of eternal, inactive joy. In the presence of God they would worship him and sing praises to him eternally, but nothing more.” And if I’m being completely honest, yes, God deserves all the praise we can give Him. But, no disrespect to God, singing praises for eternity sounds like it would get really old after the first millennia or so. I’m just keepin’ it real with y’all.

That said, Mormons have some seriously different beliefs about heaven and eternity. One that deserves a hearty fist pump is the fact that after this life we can continue to progress in knowledge and understanding forever. What kind of knowledge and understanding? The kind God has. Eternity will be filled with learning, progressing, and following in our Heavenly Father’s footsteps until we can ultimately become like He is now. Is there any greater and more rewarding purpose than this? Is there any greater way to praise a loving God than to learn at His feet and adopt His eternal purposes as our own? Sign me up.

6. The corporeal nature of God

That’s a fancy way of saying, “God has a body.” Heck to the yes, this just clicks. In a world where people think God takes the form of an ethereal energy, the unembodied sentiment of “love,” or any number of other theories, this Mormon doctrine feels right. I mean, if we were created in the image of God, it makes sense that he’s got a body similar to the ones we have. It adds insight into what Christ meant when He said, “If ye have seen me, ye have seen the Father.”

Of course, there are obviously a few differences between our bodies and His. His body is eternal, glorified, and perfect. Ours aren’t. But arms, legs, torso, a noggin—they’re all there. So sweet.

Mormons believe some awesome stuff. I covered a meager six here, but what else can you think of? Let us know in the comments.