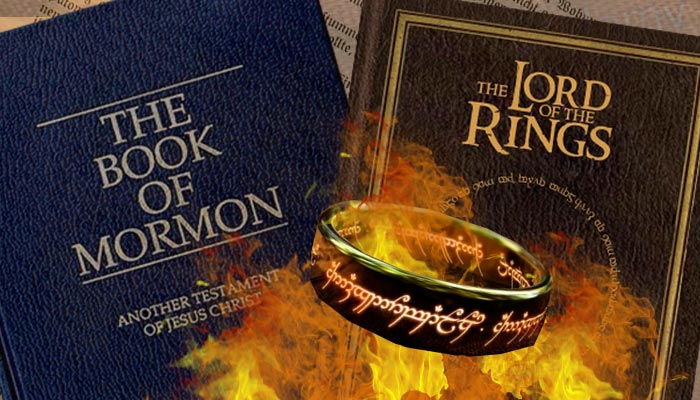 As this article deals with the highly beloved Lord of the Rings trilogy, I figured it’d only be right that I write the remainder of it in one of the two Elvish languages created by J.R.R. Tolkien. I’m so devoted to my work, I amaze even myself.

So here goes — my first thought is this:

Okay, forget it; this Quenya language is way too hard. (Although, to be fair, I’m just barely getting the hang of this “English” thing.) But really, how amazing is it that Tolkien was able to create an entire world and language all on his own? It’s a fact that many critics of the Book of Mormon have used to denounce that scripture’s historical authenticity. If Tolkien could create a fictional world filled with different and complex people, geographies, wars, and cultures, Joseph Smith could’ve done the same… Right?

Wrong — at least if a recent BYU study has anything to say about it.

The study, entitled “Comparing Book of Mormon Names With Those Found in J.R.R. Tolkien’s Lord of the Rings: An Exploratory Study,” was conducted by four BYU professors and focuses on small units of sound called “phonemes.” An LDS Living article compares a writer’s use of these phonemes to the unique nature of a fingerprint: “This is a pattern of sound that — rather like the individual “wordprint” seems to characterize different writers or like the fingerprints that are used to identify and specify the perpetrators of criminal acts — appears to be distinctively characteristic of individual authors and could, therefore, serve to differentiate one writer from another.”

Basically, the author (typically unintentionally) uses similar units of sounds whenever they create a name; this identifies the name as distinctively theirs and is thus dubbed their “phonoprint.” Using this idea, the BYU study aimed to compare the names found in the Book of Mormon — a book that Latter-day Saints believe has many different authors — with the names found in The Lord of the Rings trilogy. If the Book of Mormon was truly authored by a variety of people, its names would not have distinctive phonemes; on the other hand, The Lord of the Rings‘ names, created by one author, likely would contain distinguishing units of sound.

It’s important to note that Tolkien was a renowned philologist (a sub-field of linguistics) who attempted to base all of his names off of different languages and cultures, thus avoiding any distinctive phonemes. Even despite his efforts, however, the BYU study found that Tolkien did indeed have a unique phonoprint and that the names found in The Lord of the Rings had similar units of sound.

The Book of Mormon, however, does not contain a unique phonoprint. (Hear that? It’s me cheering… Also, maybe sobbing a little with excitement. Don’t judge.)

“Results suggest that Tolkien had a phonoprint he was unable to entirely escape when creating character names, even when he claimed he based them on distinct languages. In contrast, in Book of Mormon names, a single author’s phonoprint did not emerge. Names varied by group in the way one would expect authentic names from different cultures to vary. . . . Thus the Book of Mormon name groups were significantly more diverse than Tolkien’s. . . . If the Book of Mormon names were created by an individual, they were created by a very different process or based on languages more different from each other and consistent within themselves than those created by Tolkien.”

Then, referencing Tolkien’s lifelong (he lived to be 81) fascination with language compared with Joseph’s (who was significantly less educated and didn’t even live to see his 40th birthday) knowledge of language and culture, the study reports:

“As linguistically talented as Tolkien was, he was not able to use different sounds and whole name units consistently according to the different invented languages from which they were derived . . . even though he was the creator of these languages. Consciously or subconsciously, it appears Tolkien could not escape his own natural leanings toward some phonemes over others as he invented or selected names. If Joseph Smith authored the Book of Mormon, he invented an incredible number of unique names without leaving evidence of a possible phonoprint — a flexibility that Tolkien, despite his incredible repertoire of sounds and symbols, was not able to accomplish.”

How could Joseph Smith have singularly authored a book (in less than three months, by the way!) that is more complex and intricate than a book worked on for many years by a highly educated philologist?

If you ask me, the answer is simple: because Joseph Smith didn’t author it. The Book of Mormon is an ancient record translated by the gift and power of God.

And best of all, it’s true.