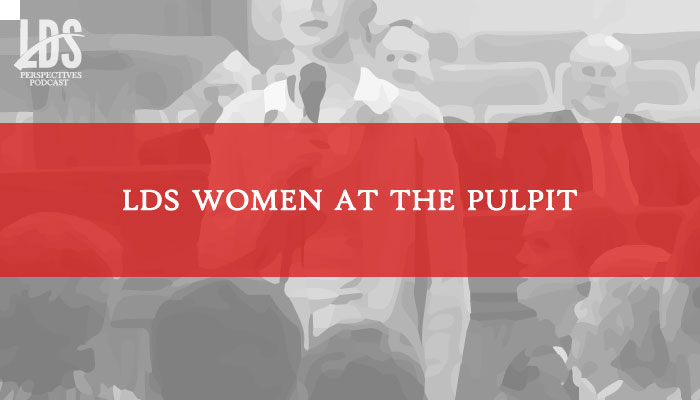 Editors Jenny Reeder and Kate Holbrook, respectively 19th- and 20th-century women’s historians, discuss their multi-year project to bring LDS women’s speeches together in At the Pulpit: 185 Years of Discourses by Latter-day Saint Women.

This is the second book to come out of the Church Historian’s Press in as many years with the goal of making LDS women’s experiences, history, and discourses available to the mainstream membership.

Before the reader even opens the book, the nostalgic cover art of At the Pulpit brings to mind its two opposing themes: change and familiarity. One glance at the over-sized corsage adorning Belle Spafford’s tailored dress may spawn a flood of memories. When was it that they stopped having women wear corsages at conference anyway? The scene is as familiar and comforting as it is foreign.

Because women didn’t typically speak in conference settings before the mid-20th century, the definition of “discourse” is stretched a bit for this anthology. To Reeder and Holbrook’s credit, this makes the book seem less like a collection of discourses than treasured glimpses into the relationship LDS women have had to their God over the last 185 years.

It is less a collection of talks than a creative medium for teaching about how attitudes toward the roles of women at home and in the LDS Church have changed and in some ways remained the same.

Many may find the introductions to each discourse the most enjoyable portions of the book. In these brief overviews, readers not only receive context for the discourse but also context for the time in which it is given.

Overall this is a welcome addition to the fine work coming out of the Church History Department and to the library of anyone wishing to entertain a more nuanced view on the amplitude of women’s voices in LDS discourse over the years.

Watch for these upcoming podcasts: