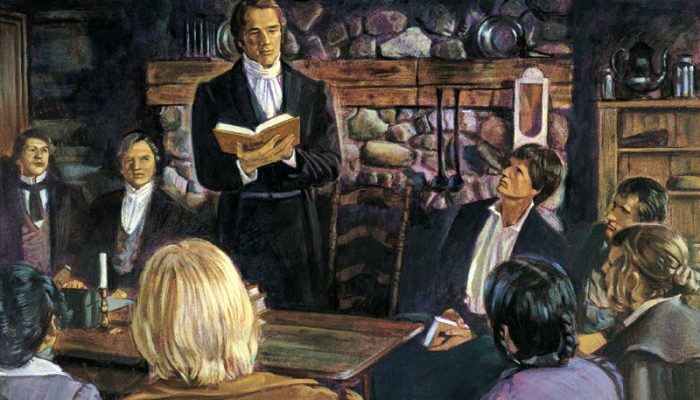 Helen Mar Kimball became the plural wife of Mormon prophet Joseph Smith a few months shy of her 15th birthday. While taking a bride so young startles us in this day and age, it was not uncommon in the early 19th century. Plural marriage was practiced in about 85% of the world, but the idea was repugnant among European and American Christians.

Plural marriage had barely begun as an institution in the Mormon Church, and only Joseph Smith and a few church leaders had begun to practice it. Helen’s father, Heber Kimball, taught her about it.

Heber C. Kimball had been ordained to The Quorum of the Twelve Apostles in 1835, five years after the organization of The Church. Because of his faithfulness, he was one of the first (after Joseph Smith) commanded to live the principle of plural marriage in 1842 in Nauvoo, Illinois.

Helen’s Parents, Heber and Vilate Kimball, were Shaken by the Principle of Plural Marriage

When Joseph Smith taught Heber C. Kimball the principle and called upon him to live it, his first thought was to see if two elderly ladies would want to marry him..  They were friends to Vilate, and they were the least likely to bring jealousy into what was an ideal marriage. But Joseph wanted Heber to marry “…an English lady named Sarah Noon, nearer my mother’s age, who came over with the company of Saints in the same ship in which father and Brother Brigham returned from Europe. She had been married and was the mother of two little girls, but left her husband on account of his drunken and dissolute habits. Father was told to take her as his wife and provide for her and her children, and he did so” (Journal of Helen Mar Kimball).

The revelation Joseph had received required the first wife to approve of the principle and be willing to practice it. If the first wife couldn’t get a witness that it was indeed a commandment from God and thus disapproved, she could lose her exaltation in heaven. Joseph suggested that Heber keep his plural marriage secret from Vilate, until God Himself revealed the principle to her.

Heber was so committed to Joseph as a prophet, he couldn’t imagine being disobedient, but he loved Vilate so dearly, keeping his plural marriage a secret, and even practicing it in the first place, caused him so much anxiety, he became ill in body and in mind. Vilate worried and questioned him to no avail.  Finally, they were both pleading with the Lord privately, Vilate for her wretched husband, and Heber in anguish for his wife.

Helen wrote the following about her mother Vilate:

While pleading as one would plead for life, the vision of her mind was opened, and, as darkness flees before the morning sun, so did her sorrow and the groveling things of earth vanish away.

Before her, was illustrated the order of celestial marriage, in all its beauty and glory, together with the great exaltation and honor it would confer upon her in that immortal and celestial sphere, if she would accept it and stand in her place by her husband’s side. She also saw the woman he had taken to wife, and contemplated with joy the vast and boundless love and union which this order would bring about, as well as the increase of her husband’s kingdoms, and the power and extending throughout the eternities, worlds without end.

With a countenance beaming with joy, for she was filled with the Spirit of God, she returned to my father, saying: “Heber, what you kept from me the Lord has shown me.” She told me she never saw so happy a man as father was when she described the vision and told him she was satisfied and knew it was from God.

Vilate covenanted to live the principle, and  “…gave my father many wives, and they always found in my mother a faithful friend.”  However, Vilate would go through a great many trials as she lived the principle of plural marriage.

Now Helen would have to find that same witness. Heber C. Kimball had offered her as plural wife to Joseph Smith, then aged 37.

Heber Offers Helen, “His only Ewe Lamb,” to Joseph Smith

At first, all Helen could think about was the loss of her teenage freedom.  There would be no dances, no flirtations, no suitors. She comforted herself by imagining that hers would be a marriage for “eternity only,” as many of Joseph’s plural marriages were. These marriages were to have effect only in heaven. Eternity-only wives could be married to someone else during mortality.

Helen also tried to imagine with her teenage heart how wonderful celestial glory would be in contrast with the temporary pleasures she would have to give up. Her parents, however, taught her that celestial marriage was no guarantee of heavenly glory. There would be other tests to endure.

Helen recounted in her journal how she felt when she was introduced to the principle:

I knew that he [her father, Heber] loved me too well to teach me anything that was not strictly pure, virtuous and exalting in its tendencies; and no one else could have influenced me at that time or brought me to accept of a doctrine so utterly repugnant and so contrary to all of our former ideas and traditions. This was just previous to his starting upon his last mission but one to the eastern states. Fearing that I might hear it from a wrong source, knowing, as he did, that there were those who would run before they were sent, and some would not hesitate to deceive and betray him and the brethren, he thought it best that I should hear it from his own lips.

The next day the Prophet called at our house, and I sat with my father and mother and heard him teach the principle and explain it more fully, and I believed it, but I had no proofs, only his and my father’s testimony. I thought that sufficient, and did not deem it necessary to seek for any further.

“As Helen declared, her father facilitated the union, apparently motivated by a desire to be related to the Prophet through the plural marriage. In another narrative, Helen explained: “He [her father —Heber C. Kimball] taught me the principle of Celestial marriage and having a great desire to be connected with the Prophet, Joseph, he offered me to him; this I afterwards learned from the Prophet’s own mouth.”  (From the upcoming book by Brian C. Hales and Laura H. Hales, Joseph Smith and Nauvoo Polygamy: Separating Fact from Fiction, Salt Lake CIty: Greg Kofford Books, 2015.)

Helen continued to live with her parents after her “sealing” to Joseph Smith in Nauvoo.  There is no documentation available that shows that Joseph Smith cohabited with Helen Mar Kimball, and there were no offspring.  Much later in Utah in 1892 plural wives were required by the government to testify about their plural unions in court, but Helen was not summoned to explain her marriage to Joseph Smith. This lends credence to the idea that she and Joseph did not cohabit.  Thirteen months after her sealing to the Prophet, he was killed. Years later she reflected:

I am thankful that He [Heavenly Father] has brought me through the furnace of affliction and that He has condescended to show me that the promises made to me the morning that I was sealed to the Prophet of God will not fail and I would not have the chain broken for I have had a view of the principle of eternal salvation and the perfect union which this sealing power will bring to the human family and with the help of our Heavenly Father I am determined to so live that I can claim those promises.

After Joseph’s death, Helen married and bore children.  Helen was married monogamously to Horace Whitney when the Saints headed west from Nauvoo.

Helen and Horace Whitney began the journey across the plains during the exodus from Nauvoo. They reached Winter Quarters, Nebraska, in June 1846. Nineteen-year-old Helen bore her first child in May 1847, while her husband was away on an expedition to Salt Lake Valley. The child was stillborn (Compton 1997, p. 507).

In August 1848, while on the plains during the journey west, Helen had another child that died shortly after birth. This birth resulted in complications to Helen’s health, which almost resulted in her death. Following a long battle to regain her health, Helen bore her third child, who was born and died in September 1849 (Compton 1997, pp. 510–511). She eventually bore 11 children.

She saw the trials of her mother within the practice of polygamy, and she was temporarily embittered when she lost her first baby…

I had, in hours of temptation, when seeing the trials of my mother, felt to rebel. I hated polygamy in my heart, I had loved my baby more than my God, and mourned for it unreasonably…

Later in life Helen became a defender of the practice of polygamy, authoring several articles and a book defending the practice.  She reported,

I did not try to conceal the fact of its having been a trial, but confessed that it had been one of the severest of my life; but that it had also proven one of the greatest of blessings. I could truly say it had done the most towards making me a Saint and a free woman, in every sense of the word; and I knew many others who could say the same, and to whom it had proven one of the greatest boons–a “blessing in disguise.” (Helen Mar Kimball, Why We Practice Plural Marriage, 23-24 cited in Andrus, Doctrines of the Kingdom.)

I have encouraged and sustained my husband in the celestial order of marriage because I knew it was right. At various times I have been healed by the washing and anointing, administered by the mothers in Israel. I am still spared to testify to the truth and Godliness of this work; and though my happiness once consisted in laboring for those I love, the Lord has seen fit to deprive me of bodily strength, and taught me to ‘cast my bread upon the waters’ and after many days my longing spirit was cheered with the knowledge that He had a work for me to do, and with Him, I know that all things are possible…

The Prophet said…that it [plural marriage] would damn more than it would have because so many/ unprincipled men would take advantage of it, but that did not prove that it was not a pure principle. If Joseph had had any impure desires he could have gratified them in the style of the world with less danger of his life or his character, than to do as he did. The Lord commanded him to teach & to practice that principle. (Helen Mar Kimball Whitney, Letter to Mary Bond, n.d., 3-9 quoted in Brian Hales, Joseph Smith’s Polygamy: History, Vol. 1, 26-27.)

We may read the history of martyrs and mighty conquerors, and of many great and good men and women, but that of the noble women and fair daughters of Zion, whose faith in the promises of Israel’s God enabled them to triumph over self and obey His higher law, and assist His servants to establish it upon the earth, … I feel sure there was kept by the angels an account of their works which will yet be found in the records of eternity, written in letters of gold. (Helen Mar Whitney, A Woman’s View: Helen Mar Whitney’s Reminiscences of Early Church History, ed. Richard N. Holzapfel and Jeni B. Holzapfel (1997), 140.)

Helen Mar Kimball Smith Whitney died in Salt Lake City, Utah, in 1896 at age 68, an active member of the Church. 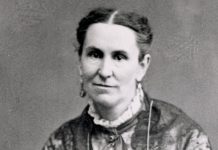