Faith Book of Mormon Prophecy Reveals Why Moroni Took the Golden Plates Back...

Allow me to start off with a conversation you might be vaguely familiar with:

Me (eagerly): “Yeah, Joseph Smith translated these really cool ancient gold-colored plates into what we call The Book of Mormon!”

Them (inquisitively): “Sweet! Can I see a picture of the plates? Or do I have to go to Utah to see them?”

Me (matter-of-factly): “Actually there aren’t any pictures, and they’re not even on display in Utah.”

Them (confusedly): “So you’ve never seen them?”

Me (less-eagerly): “Um, no. God commanded Joseph to keep them private. But a dozen or so other people did see them.”

Them (suspiciously): “Well where are the plates now?”

Me (grinning painfully): “The angel who gave Joseph the plates took them back after Joseph finished translating.”

Me (kicking myself): “Uhh … because Joseph didn’t need them anymore? Moroni wanted them for his bookshelf? I have no idea.”

This article (forcing itself into the conversation): “Well let me tell you!”

Stuff you should know

It’s a common argument from modern critics of The Church of Jesus Christ of Latter-day Saints that Joseph Smith never had the plates he claimed to have. But evidence from Joseph’s day suggests a different narrative. People were convinced he had them. Multiple assailants attacked him immediately after retrieving the plates for the first time. It wouldn’t be the last time people, even armed mobs, tried to take them from him. Joseph hid them anywhere he could: in a chest, a barrel of beans, under bed covers, hearthstones, the floor of a cooper shop, and even in the shop’s rafters, to keep them safe from the people determined to acquire them. Keeping the plates secure was a challenge that ultimately required Joseph and his wife, Emma, to move from Palmyra, New York, to Harmony, Pennsylvania.

The composition of the plates

About half to two-thirds of the total amount of plates were sealed together. They were “so securely bound together that it was impossible to separate them,” according to David Whitmer. This sealed portion of The Book of Mormon may even have been physically encapsulated to keep them safe from wandering eyes.

The sealed portion contains a description of what God revealed to the brother of Jared, as recorded by Moroni in Ether 4:4-7,

For the Lord said unto me: They shall not go forth unto the Gentiles until the day that they shall repent of their iniquity, and become clean before the Lord.

And in that day that they shall exercise faith in me, saith the Lord, even as the brother of Jared did, that they may become sanctified in me, then will I manifest unto them the things which the brother of Jared saw, even to the unfolding unto them all my revelations, saith Jesus Christ, the Son of God, the Father of the heavens and of the earth, and all things that in them are.

So, why did Moroni take the plates back from Joseph Smith? 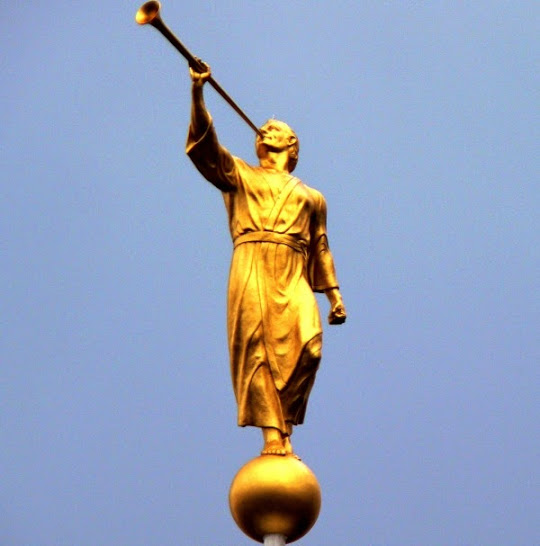 Alright, at this point in the article, at least two things should be clear. First: While Joseph Smith had the plates they were constantly at risk. Second: The sealed portion of the plates contained extremely sacred and important content that the Lord has promised to reveal in the future.

The reason why Moroni took the plates back from Joseph is surprisingly apparent right within The Book of Mormon. It’s prophesied to happen in 2 Nephi 27:19-22, well before the record of the brother of Jared would even be discovered.

Then shall the Lord God say unto him: The learned shall not read them, for they have rejected them, and I am able to do mine own work; wherefore thou shalt read the words which I shall give unto thee.

Touch not the things which are sealed, for I will bring them forth in mine own due time; for I will show unto the children of men that I am able to do mine own work.

Wherefore, when thou hast read the words which I have commanded thee, and obtained the witnesses which I have promised unto thee, then shalt thou seal up the book again, and hide it up unto me, that I may preserve the words which thou hast not read, until I shall see fit in mine own wisdom to reveal all things unto the children of men.

And there we have it. Nephi himself prophesies that the man to inherit The Book of Mormon in the latter-days (Joseph Smith) would be required to return the record to divine hands to ensure the preservation of the sealed portion of the plates. You may notice that Nephi also reiterates the promise made in Ether:

That which is in the sealed portion will be revealed one day. In other words, the golden plates just might be back in action for round two sometime in the future. Whether that happens in our lifetime or not, who knows. But if there’s one thing we can count on, it’s the promises of the Lord. The day will come when hopefully you and I, in this life or the next, will turn the pages of the sealed portion and pore over some of the mysteries of the eternities.