Faith Prophets Are Human, Too 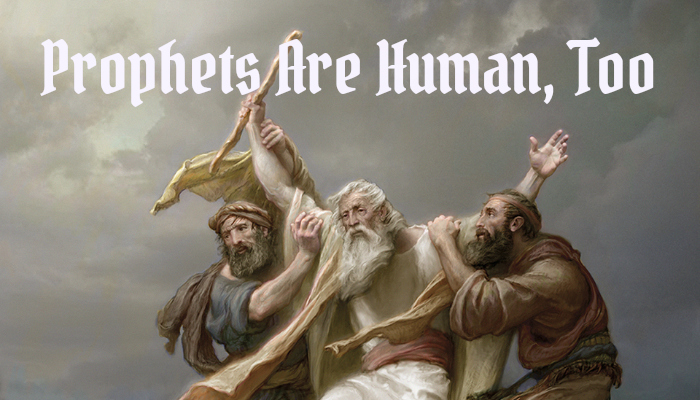 One of the unique claims of The Church of Jesus Christ of Latter-day Saints is that we are guided by living prophets, made up of a quorum of twelve apostles, who have the power and authority to speak for God. This fact doesn’t just set us apart from other churches. It makes this church the only true church on the earth.

Not to say that other churches are devoid of truth. We respect other religions and believe that the vast majority of them bring people closer to God and do much good in the world. Like us, they do their best to live according to the truth that they have received.

But they are missing the piece that we believe makes all the difference—a living prophet, called by God to speak His word and guide His church in these days. Without access to prophetic revelation, all truth and doctrines are vulnerable to debate, false interpretation, misapplication, deletion, and manipulation by people who either don’t understand them or who want purposely to alter them.

Knowing that our church is led by living prophets restores our faith in a God who cares as much about his children today as those who lived in Christ’s day, or in Old Testament times. It confirms that God is the same yesterday, today, and forever. It fulfills His promise that He “will do nothing save he reveals it to his servants the prophets.” And it provides God’s children with reassurance that there is a stable, reliable source to which we can look for guidance as we navigate our lives.

Except when prophets are wrong.

Prophets are not infallible. They are, after all, men. Contrary to what some Disney princess movies might lead you to believe, there is no such thing as “the perfect man”—unless you’re talking about the one who could walk on water. Even He had the option and ability to make the wrong choice all along. And yet many members of the Church express shock and dismay when any modern-day prophet betrays symptoms of being human.

In some congregations, there seems to be a taboo against even acknowledging that a prophet has ever been wrong, despite overwhelming evidence to the contrary. Upon suggesting such an idea in Sunday School, I was once…ahem…admonished by several concerned members after the meeting. Others go to the opposite extreme and obsess over past prophets’ imperfections to the point of ultimately denying their own testimonies and fleeing the Church.

But prophets messing up is nothing new. The scriptures are full of examples of the Lord’s chosen making less than desirable choices. Let’s look at a few, shall we?

He rained plagues down upon the Egyptians, parted the Red Sea, led the Israelites to freedom, and governed a huge, theocratic nation. He also ignored one of God’s commands and was handed a harsh punishment: he never actually got to enter the Promised Land with his people.

You might remember this guy. Due to personal prejudices, this prophet didn’t think the people of Nineveh deserved to hear the good word and refused God’s command to preach the gospel to them. His punishment consisted of a three-day time out in the belly of a whale.

Balaam wasn’t just disobedient every now and then—he was a bit of a rebel. He spoke with God on multiple occasions but ultimately gave in to greed and led the Israelites to commit sin. Even his donkey had a few choice words for him. He was ultimately slain by his own people.

These first three examples all come from the Old Testament. Many of us have been hearing about these men for most of our lives. We are fairly familiar with their stories and imperfections, and yet, I don’t hear anyone fuming over the fact that they disobeyed God’s commands. We take it for granted that some of these prophets retained their callings even after making some serious mistakes—but we can’t seem to apply the same principles to latter-day prophets.

Joseph Smith and other early prophets of the restored Church present some of the biggest stumbling blocks for many members. Granted, much of the negativity spread about these relatively recent prophets is more fiction, exaggeration, or manipulation than fact—but the truth is that the prophet of the Restoration wasn’t any less human than those who preceded him.

Some claim that the Church whitewashes Joseph’s history, and while we certainly don’t go over every detail of his life in Sunday School, all the information the Church has about him is available to anyone who cares to go look it up. Just start with Joseph’s own history and the Doctrine and Covenants and you’ll learn pretty quickly that Joseph was no angel—and no one tried to hide it. The Lord spares Joe no shame when He repeatedly calls him (and other apostles) out on sins, pride, worldliness, disobedience, and plain old mistakes.

The fact that we don’t dissect each and every one of the prophets’ faults isn’t a sign of denial, willful ignorance, or dishonesty. It is an acknowledgment that, ultimately, none of the prophets was perfect, and obsessing over their mistakes is a distraction from what should be our main focus—living and sharing the gospel of Jesus Christ.

This example is a recent discovery on my part and requires a little explanation. I was reading the Doctrine and Covenants a few weeks ago and came across a section in which Christ expounds some verses from the New Testament to Joseph Smith. Apparently, there was some squabbling among Jewish church members over the law of circumcision. In a marriage in which the husband and wife were at odds over the issue, the “unbelieving” spouse often insisted on circumcizing their sons. This caused their children to disbelieve Christ’s gospel and follow the Law of Moses instead.

This is where it gets interesting. Look at what Christ says about Paul’s response to this problem:

Wherefore, for this cause the apostle wrote unto the church, giving unto them a commandment, not of the Lord, but of himself, that a believer should not be united to an unbeliever; except the law of Moses should be done away among them…” (emphasis added)

In order to avoid conflict and the potential loss of young members, Paul essentially commanded members of the Church not to marry non-members. He saw a problem and issued a policy based not on God’s will, but on his own judgment. And, as far as I can tell, God didn’t do anything about it. Perhaps He later corrected Paul, but it is impossible to know from our current record if, when, or after how much time He did so.

I think we can all look back on our history as a church and identify times when similar things have happened. What does this tell us? Let’s review what we know:

This presents a challenge for the rest of us. If we’re supposed to follow the prophets, but they are imperfect and don’t always say the right things, how do we know that we can trust them to lead us in the right way?

In addressing this problem, let me ask another question:

In whom should we trust?

Yes, God has provided leaders to whom we can and should look for guidance. But, ultimately, our trust should lie with Him. Rather than blindly trusting in the arm of flesh, we need to be diligent in seeking spiritual confirmation of the instruction we are given by prophets.

As President Lorenzo Snow once said, “each member of the Church has a right to have that measure of the Spirit of God that they can judge as to those who are acting in their interests or otherwise.”

If considering the possibility that both ancient and modern prophets have made mistakes causes you to 1) question your faith or 2) get defensive and deny that such a thing could happen—maybe the issue is less about what prophets have or haven’t done and more about your own spiritual foundation. Perhaps you aren’t doing your part to ensure that your faith is based on your personal relationship with God, rather than defaulting to the authority of His leaders.

Now, I am not saying that we can no longer turn to the words of the prophets to help us make decisions, or that we should regard all the apostles’ words with suspicion, or question every pronouncement that they make. The scriptures tell us that the Church will never again fall into apostasy (Daniel 2:44). Therefore, we can rest assured that no prophet’s imperfections will lead to a deviation from the gospel such that our salvation will be at risk.

An individual may fall by the wayside, or have views, or give counsel which falls short of what the Lord intends. But the voice of the First Presidency and the united voice of those others who hold with them the keys of the kingdom shall always guide the Saints and the world in those paths where the Lord wants them to be.

So, the next time you read a Brigham Young quote that makes you uncomfortable or hear someone blast the Church over the former priesthood ban, don’t be so quick to either question the prophets’ validity OR say that every word they spoke represented the will of God. Instead, remember:

Except in the case of His only perfect Begotten Son, imperfect people are all God has ever had to work with. That must be terribly frustrating to Him, but He deals with it. So should we. And when you see imperfection, remember that the limitation is not in the divinity of the work.

Let us grant our beloved prophets and apostles the same grace that we all so desperately need. After all, we are all here to do the same thing—be a little less imperfect every day.