Life Relationships The McKay’s: A Marriage of Love & Respect 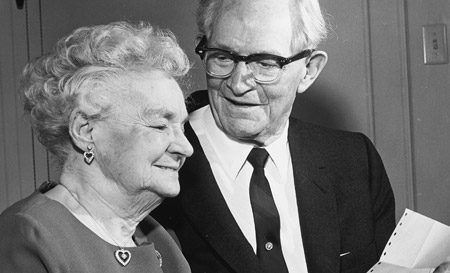 When David O McKay and Emma Ray were sealed in the Salt Lake City Utah Temple on January 2, 1901, they were the first couple to be sealed in that temple that year. Their union of 69 years exemplifies the continued devotion they had for each other. The strength of their marriage was and continues to be noted by family, friends and strangers alike.

When President David O McKay proposed to his wife Emma Ray Riggs in December 1900, she promptly asked, “Am I the right one?” After a moment of thought, he assured her most confidently that she was.

Throughout their engagement period, David’s letters to Emma reflected the noble character and loving qualities that typified their relationship throughout their lives. On one occasion he wrote,

“ You say our union will be an eternal one. Eternity alone can satisfy the love I long for, and the love I have to give…I am lonesome without you, Ray, and I long for the time to come when you will always be by my side.”

Because of this righteous living and wise courtship, President and Sister McKay were able to realize and ultimately attain their goal of eternal marriage.

When they were first married, neither of them had an inherited fortune. Other than the treasures of wonderful family and healthy bodies and minds, they faced many of the same trials and errors that newlyweds face today. They were frugal in all senses of the word , and were blessed with access to the McKay farm and ranch in nearby Huntsville, Utah.

Marriage as a High Ideal

With the high ideal of marriage as revealed to the Prophet Joseph Smith, President McKay continually stressed that members of The Church of Jesus Christ of Latter-day Saints should have but one goal, and that is to keep in mind the fact that marriage, the foundation of society, is “ordained of God” [D&C 49:15] for the building of permanent homes in which children may be properly reared and taught the principles of the gospel.

A tribute to the McKays’ marriage was given by a young couple preparing for marriage. One of President McKay’s sons, David Lawrence McKay, related the experience as follows:

“When Father and Mother were living at 1037 East South Temple [in Salt Lake City], a young couple arrived in a car, got out, and then sat down on the front lawn. There, the young man proposed to the young lady. As he later related the story to a member of the family, it was because ‘I want our married life to be as ideal as that of President and Sister McKay.’”

Until the time that President McKay was confined to a wheelchair, he made it a habit of his to always rise when his wife entered the room, held her chair for her, and opened the car door for her as she got in and out. He also always made sure to tell her hello and goodbye with an affectionate kiss. This practice still continued when both President and Sister McKay used wheelchairs. Once when President McKay was being wheeled away for a meeting, he exclaimed: “We have to go back. I didn’t kiss Ray goodbye.” He was wheeled back for this loving ritual that had become a part of their relationship.

Principles of an Eternal Marriage

Throughout his tenure as President of The Church of Jesus Christ of Latter-day Saints, he offered multiple pieces of advice concerning how to maintain a successful marriage and family relationship. Here are a few:

Let husband and wife never speak to one another in loud tones unless the house is on fire.

One of McKay’s early challenges was to control his tongue:

I picture now in memory, a fork raised in Father’s hand when one of us boys began to find fault with our day school teacher, stopping us. He did not want to hear about the faults of that teacher around the table. I recall, too, a rebuke, written by Father when I was in the mission field. I had seen the acts of an elder whom I condemned because I thought he was ungentlemanly in his treatment of some members of the Glasgow Branch who were returning from a street meeting. And I wrote home to Father regarding it. This happened during my first month in Glasgow.

He wrote a letter in which he quoted, “first cast out the beam out of thine own eye; and then shalt thou see clearly cast out the mote out of they brother’s eye.”  (Matthew 7:5.) He thought that would be pretty hard, I suppose, and he softened it by saying, “Your mother is looking over my shoulder as I write and she says, ‘Don’t write that to the boy,’ but I tell her that you are His servant and you know the spirit in which it is given.” I did not write any more criticism of any of my associate missionaries.

. . . Joseph Anderson, who for decades took the minutes in First Presidency meetings, noted that there were numerous occasions that could have elicited angry outbursts: “I have seen him under extreme pressures when under such conditions he could easily have lost his temper, but I never knew him to say an angry word. He may have felt annoyance, and rightly did on certain occasions, but he had great control over his speech, his language, and his attitude.”

When his secretary asked how he managed, he told her his secret: “I learned many years ago, when I felt this surge of anger or retort coming over me, to put my tongue way back in my mouth and clamp my teeth down on it, and not to say the unkind and hurtful thing. Every time that I did that, I found that it was easier the next time to control my feelings.”

No other success can compensate for failure in the home.

“David and Ray reared their children in an atmosphere of love, harmony, and security, where father and mother were respected, not because they demanded their place as leaders, but because the children naturally made them their ideals and respected their judgment. …

“There were no company [visitor] manners in the McKay home. Father and mother were as courteous to each other and to their children when only the members of the family were present, as when the most respected guests were in the home. The same courtesy and respect for each other’s rights were required of the children in their association and play together” (Jeanette McKay Morrell, Highlights in the Life of President David O. McKay [1966], 42, 47).

The most important thing a father can do for his children is to love their mother.

The McKay children were not the only ones who saw the loving affection of their father to their mother. In this instance, even a complete stranger noted how well loved Sister McKay was.
“I accompanied my husband to a dedication of a meetinghouse in Los Angeles. We stopped on Wilshire Boulevard to get our car washed. I sat on a bench and the President was standing over by the car. Suddenly at my elbow I heard a tiny voice say, ‘I guess that man over there loves you.’ Surprised, I turned and saw a beautiful boy about seven years of age with dark curly hair and large brown eyes. ‘What did you say?’

“‘I said, I guess that man over there loves you.’

“‘Oh, ‘cuz, the way he smiled at you. Do you know, I’d give anything in the world if my Pop would smile at my Mom that way.’”

President McKay in turn had a powerful influence as a loving father. When one of his sons, David Lawrence, was a young boy, he accompanied his father in a horse-drawn carriage.

“We forded a swollen river in a thunderstorm,” David Lawrence later recalled, “and got caught between that river and a mountain torrent. I thought the end of the world had come, and started to cry. Father held me on his lap in his arms all night until we were rescued in the morning. It’s hard to disobey a man who loves you and puts his arms around you.”

With these simple admonitions, we should better strive to make our homes and marriages more to the celestial degree, and with that learning from not just David O. McKay’s example but all of our prophets and apostles, past and present.