The popular Youtube channel, Mormon Girls Say has released a new video, providing a jovial spin off of crazy baby names that Mormon mothers give their sons.

A few of the names that are mentioned are: Ayebraeham, Lorenzo, Kayze, Treylin, Draze, Ryker, Jackson, Brenr, and more. The two girls that run the channel, Chelsea Wilson Calder of St. George, Utah, and Elisabeth Evans from New York City have been producing videos since 2011.

In response to the video, The Spectrum quoted Calder saying,

We found everyone has really loved it. Even the greatest offenders of the Utah names can kind of laugh at themselves and look at it in a lighthearted way.

Their claim to fame happened when they released a video titled, “Things Mormon Girls Say“, reaching up to a half a million views over the past two years.

Additionally, The Spectrum recorded the girls mentioning how grateful they are for the constant support they’ve received. 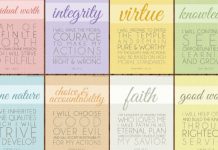 The YW Values as Superheroines