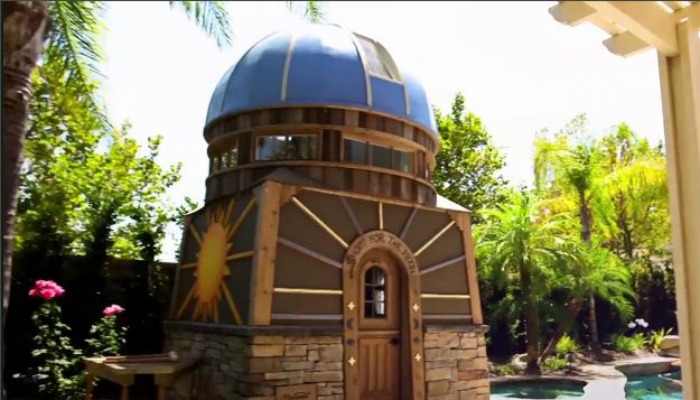 Tyson and Audrey Leavitt, also known as the “Playhouse Masters,” are building playhouses and treehouses that most children only dream about.

Famous for their mind-blowing playhouses, the LDS couple’s new television series, “Playhouse Masters,” will premiere on August 23 on TLC. And when the NBA’s MVP Stephen Curry asks for a playhouse for his own children, you know it’s a big deal.

“In addition to the Golden State Warriors star, the lineup includes Ali Landry, whose kids dream of hanging out in a fantasy birdhouse, Law & Order‘s Alana de la Garza, whose youngsters go for a brainy planetarium theme and Ryan Zimmerman of the Washington Nationals, whose daughter dreams of a classic storybook castle,” read the People.com article.

Tyson and his family took a big chance when selling their landscape business of nine years to focus on building over-the-top playhouses with their own company, “Charmed Playhouses.”

“My landscape business was really draining on me because I was working from sunup to sundown, and I wasn’t able to spend time with my kids and my family,” Tyson Leavitt told DeseretNews.com. “I wasn’t able to use it as a creative outlet because I was limited to what could really be built in this neighborhood, which is a small city of 90,000.”

Though they may be busier running their own business, Tyson and Audrey realize the importance of balancing their work and church life.

“When I got called into the stake high council, I had a blessing from the stake president that gave me some direction and confidence to go ahead with my business,” Tyson said. “He said I would find more time in my business and more success as I served in my calling. It really came true. It was a testament to us because at the time I felt like it was such a heavy calling and I didn’t know how I was going to be able to handle it. It just showed us that if you just put your faith in the Lord, he will take your life in a way you wouldn’t expect.”

The family’s goal is to represent more than just playhouses, but to represent themselves and the Church in the way God would want them to.

The bigger picture for building elaborate play houses remains unclear, but they do know that it brings families closer together.