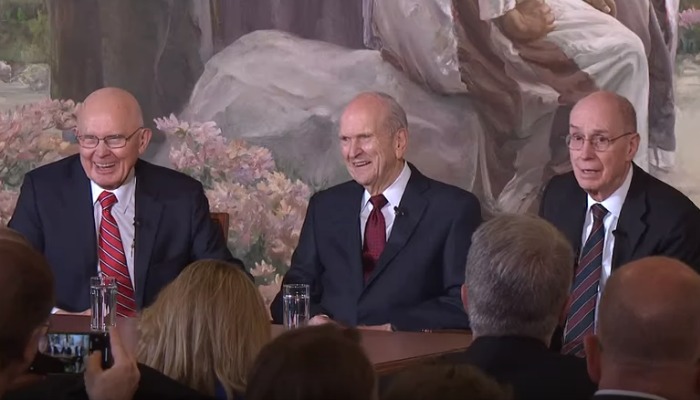 This morning The Church of Jesus Christ of Latter-day Saints made the historic announcement that President Russell M. Nelson will fill the role of prophet and president of the Church after the passing of President Thomas S. Monson.

President Dallin H. Oaks and President Henry B. Eyring will serve as President Nelson’s first and second counselors, respectively, in the reorganized First Presidency. You can watch the announcement below:

Elder Dieter F. Uchtdorf, who served as second counselor in the First Presidency during President Monson’s ministry, now returns to his seat amongst the Quorum of the Twelve Apostles. President Nelson commented that Elder Uchtdorf has already received assignments that he has the unique abilities to fulfill.

Elder Christofferson explained that President Nelson and the new First Presidency were set apart in the Salt Lake City temple on January 14th “in a setting of fasting and prayer,” Elder Christofferson said. “As a participant I must say, it was a sweet and sacred experience in which the Lord’s will was clearly manifest and all were in full accord.”

The new First Presidency took time to speak during the brief announcement.

He also took time at the conclusion of his remarks to give counsel to Latter-day Saints throughout the world.

“To each member of the Church, I say: Keep on the covenant path. Your commitment to follow the Savior by making covenants with Him, and then keeping those covenants will open the door to every spiritual blessing and privilege to men, women, and children, everywhere.

“As a new presidency, we want to begin with the end in mind. For this reason, we are speaking to you today from a temple. The end for which each of us strives is to be endowed with power in a house of the Lord, sealed as families, faithful to covenants made in a temple that qualify us for the greatest gift of God—that of eternal life.

“The ordinances of the temple and the covenants you make there are key to strengthening your life, your marriage and family, and your ability to resist the attacks of the adversary. Your worship in the temple and your service there for your ancestors will bless you with increased personal revelation and peace and will fortify your commitment to stay on the covenant path.

“Now, if you have stepped off the path, may I invite you with all the hope in my heart to please come back. Whatever your concerns, whatever your challenges, there’s a place for you in this, the Lord’s church. You and generations yet unborn will be blessed by your actions now to return to the covenant path.

“Our Father in Heaven cherishes his children and he wants each of us to return home to him. This is a grand goal of The Church of Jesus Christ of Latter-day Saints—to help each of us to come back home.

“I express my deep love for you. Love that has grown over decades of meeting you, worshiping with you and serving you. Our divine mandate is to go to every nation, kindred, tongue and people, helping to prepare the world for the second coming of the Lord. This we will do with faith in the Lord Jesus Christ, knowing that He is in charge.

“This is His work and His church. We are his servants. I declare my devotion to God our Eternal Father and to His son, Jesus Christ. I know them, love them, and pledge to serve them, and you, with every remaining breath of my life. In the sacred name of Jesus Christ, amen.”

President Eyring expressed optimism in the future of the Church:

“Joseph Smith was the first prophet of this dispensation. At the start, he could speak to all the members of the Church in one building in one place. In just a few years, there were faithful members in nations across the world.

“Today, President Nelson addresses vast numbers of members who worship in thousands of buildings. The growth in the number of members and their spread across nations, kindreds, tongues, and peoples are visible miracles. But the greater miracle, and the one which will accelerate is the growth in faith in Jesus Christ.”

After the initial announcement, the new First Presidency held a press conference in which they responded to several questions from local, national, and international news outlets. You can view the conference in the video above.

President Nelson, Oaks, and Eyring responded to questions about current social issues, concerns about church history and transparency, as well as concerns about the youth of the Church.

You can find more information about the new First Presidency, their lives and ministries, via this link to Mormon Newsroom.