Buzz VIRAL: Houston Sister Missionary Speaks Out After Being Stabbed

At 4 a.m. on August 16, 2020, a man broke into the apartment of two sister missionaries serving in the Texas Houston Mission and stabbed both sisters multiple times. One month after returning home, one of the missionaries has spoken out on social media about her experience.

Related: Serving a Mission During COVID-19. What’s it Like?

A week after this terrifying experience occurred, an elder from the same mission sent an email home to his family and friends. It was shared and started to go viral. However, it was quickly taken down when people learned that the family didn’t want rumors going around.

I had actually written an article about the email that we at Third Hour removed for the respect of privacy. When I saw that the actual sister missionary involved in the event had spoken out, I couldn’t wait to share her thoughts with you!

A Daughter of God

Her name is Lauren Willardson. She introduced herself on Facebook as a “daughter of God” and “disciple of Jesus Christ.” She said,

I wanted to share the story of what happened in my own words, and more importantly share the path paved with miracles that I have walked with my Savior during this past month! It is my hope and prayer that by doing so I may bear witness of my Lord and Savior Jesus Christ, and confirm to each of you that God TRULY IS our loving Heavenly Father, that Jesus Christ is the Master Healer and Savior of the World, that He gave His life because He loves you more than you can comprehend, and that through Him ALL THINGS truly can be overcome!

Sister Willardson gave us some insight into what happened early that morning. She said that she and her companion “fought and prayed, struggling for our lives for about fifteen minutes.” She continued,

After the struggle, through the power and mercy of God, the man left. My companion and I called 911 and were then rushed to the hospital. We found in the ambulance that I had sustained nine stab wounds. At the hospital, I had a life saving surgery and then received treatment for many days. Thanks to your many prayers on my behalf and the infinite Atonement of my Savior, Jesus Christ, I am so pleased to report that I am now at home recovering nicely. I plan to return to missionary service as soon as my doctors will allow.

The next thing Sister Willardson discussed in her post was the incredible miracles that occurred. She mentioned that she is “convinced that if either of us had been there with any other missionary, [they] would not have survived.”

The faithful missionary also bore her testimony that angels were sent to protect their vitals and main arteries during the attack. She said,

The surgeon who saved my life said that if the knife in my shoulder had been turned even a degree to the left or the right, it would have sliced a main artery and vein and I would have bled out before the ambulance ever arrived. What a miracle that we were protected and the knife glided in so perfectly!

The miracles don’t stop there, though! The hospital had experienced trauma surgeons present at the time of the attack. Sister Willardson’s mission president and his wife were led by the Spirit to the hospital just in time for a “life-saving blessing.” Also, the president of the hospital was a member of the Church! He allowed parents to be by the missionaries sides even during the worldwide pandemic.

As I sat there with my limbs tensing up to the point I could not move, not knowing if I was going to bleed to death, I remember looking down at my hand and seeing that it had been stabbed through the middle. While you may think that this would be an alarming sight to behold, I remember feeling the greatest peace as my mind instantly thought of a similar wound in the hands of One much greater than I.

As more wounds were discovered on me in the ambulance and procedures following, I soon learned that my intestines had been pierced near my side, and my ankle pierced through as well right above my foot. With these three wounds I have learned more about the Atonement of Jesus Christ than I had ever understood previously.

As I thought of His pierced hands, and feet, and side, and felt the pain of my own wounds in similar spots, I finally understood a microscopic proportion of just what Christ went through to save us. There are no words that can describe the amount of agony Christ chose to endure to save us.

I do not possess the ability to describe what it feels like to have your hand stabbed through, the searing pain that follows wounds like these, or what it feels like to almost bleed to death, but because I have experienced these things I now can say to all the world: NEVER DOUBT HOW MUCH HEAVENLY FATHER AND JESUS CHRIST LOVE YOU!!

Doesn’t this missionary have an incredible testimony? I have been so incredibly moved by her words and faith. She said on Facebook that she is beyond thankful for everyone who prayed for those involved. “Your prayers enabled me through every step of this journey and I hope you each know that they have quite literally caused modern-day miracles in my healing process,” she said.

I encourage you to read her post and see everything she had to say. For now, I will close with a few more of her thoughts.

I testify that [Jesus Christ] suffered excruciatingly, so that when you go through your own Gethsemane, you do not have to suffer. He will carry you when you cannot walk. He will take away the pain when you cannot bear it. He will bring you peace when hope seems lost. He will do this for you because this is what He has done for me. None of this is unique to me. He does it for all of us. I just had to have a little tougher experience to finally learn it, but I hope and pray that each of you will not have to do the same. That you will use my experience instead and learn it now. Please learn and never forget JUST HOW MUCH YOUR SAVIOR LOVES YOU!!!

You can follow Sister Willardson on Facebook and Instagram. There, she will “highlight how every miracle worked in [her] life came from the hands of [her] Savior.” She will also provide updates about her recovery and return to the mission field.

The Facebook account name is The Work of His Hands and @the.work.of.His.hands is the Instagram handle. Sister Willardson also said, “We ask that you please also be sensitive to what is shared by word of mouth to prevent the creation of any more rumors.”

Related: How to Cope When Social Media is Flooded With Negativity

Don’t forget to share this article with your friends and family! It sure brought the Spirit into my day.

UPDATE: The Rexburg Standard Journal reported that a Houston teen has confessed to the crime. Read more here. 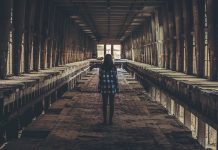 I Ran Away on My Mission, Here’s What Happened and Why