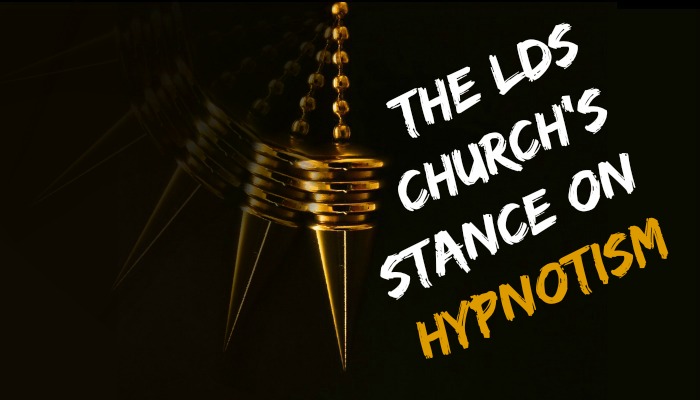 I’ve always found the art of hypnotism intriguing, but, like most of you, I really have little idea what it actually is, how it’s done or what it feels like to be hypnotized. I’ve also wondered if The Church of Jesus Christ of Latter-day Saints has ever taken an official position on the mysterious practice. After a bit of research, that’s one question I can answer.

Here’s what the handbook says

Handbook Two lays it out plain and simple:

Members should not participate in hypnosis for purposes of demonstration or entertainment.

But, that’s not all. The same handbook also says:

The use of hypnosis under competent, professional medical supervision for the treatment of diseases or mental disorders is a medical question to be determined by competent medical authorities.

A couple of relevant quotes

Official statements by the Church (like the handbooks) hold the most weight in this discussion. That said, while researching the topic these few quotes from prominent members and leaders surfaced.

Brigham Young was quick and to the point about his feelings on the subject when he said,

Mesmerism is an inverted truth; it originated in holy, good, and righteous principles, which have been inverted by the power of the devil.

The most recent (and satisfyingly thorough) quote I could find is from Joe J. Christensen, who, when he said this in 1979, was not yet a general authority (1979 was the same year he became president of the Missionary Training Center in Provo, Utah). The quote in question supposedly appeared in an issue of the New Era, but for whatever reason I can’t seem to find that issue in its entirety in the online archives. Therefore, my only source here is Brigham Young University’s Q&A forum, the 100 Hour Board.

Also, notice that there is another valuable quote from the leaders of the Church within Christensen’s quote:

‘At a program the other night a hypnotist called for volunteers from the audience. As a member of the Church, how should I respond to such invitations?’

I have been asked similar questions on several occasions by high school and college students. My personal feeling and reaction is negative. I do not feel good about the idea of being hypnotized for entertainment purposes, and frankly, I would really have to be convinced of the need even in those few cases where there may be some value from a medical standpoint. I have some very strong feelings about the great importance of free will and agency, and of the need, insofar as possible, for a person always to be consciously in control of his thoughts and actions. There is an unusual power inherent in our conscious and subconscious minds. We really know very little about the capacity of the human brain. I do not feel it is wise to use what little we know about the power of suggestion and hypnosis for entertainment purposes. Hypnosis is a powerful force and in my opinion should be employed only by the best-trained and most ethical professionals for very important reasons, such as making possible surgery and other medical and dental procedures without pain in those few cases where a patient is allergic to ordinary anesthetics.

Hypnosis is of very ancient origin and has played a part in witchcraft, magic, and tribal medicine for centuries. A Dr. Franz Mesmer in Vienna began the first scientific study of how hypnosis could be used in treating patients in medical practice way back in the 1700s. You may have heard of the word mesmerism, which gets its name from him; and though many of Dr. Mesmer’s theories of “animal magnetism” were later discredited, some medical doctors and others have continued to hold interest in the phenomena associated with it.

I thought it interesting to learn that Dr. James Braid in the middle 1800s coined the word hypnotism and performed many scientific experiments with it. Over the years interest has continued to grow in its medical use, and in the 1950s the American and British Medical Associates approved the medical use of hypnosis and suggested that untrained individuals should avoid using it.

You may be interested in the counsel published by the leaders of the Church in a Priesthood Bulletin article not long ago:

‘Reports have been received of unfortunate results to persons engaging in group hypnosis demonstrations or in popular mind control courses of study. There are reports that some Church leaders have arranged hypnosis demonstrations as a means of entertainment. Leaders should advise members of the Church against participating in such activities. Certainly, they should not be sponsored or encouraged by leaders of the Church as has been reported.’

I believe that is sound counsel, and we would be wise to follow it.

That’s about it. The Church hasn’t said much about hypnotism, but there’s definitely enough. Hypnotism for medical purposes and performed by medical professionals: that’s something for you, your doctor and God to figure out. Hypnotism for recreational purposes: that’s a no-no.