Faith When a Jew Reads the Book of Mormon 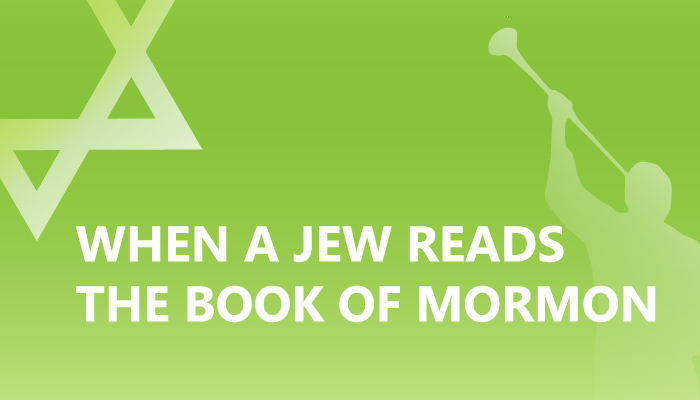 Personal experience colors our perception of everything. I’ve had some unusual experiences. I’m a Jewish convert. I believe like a Mormon, but I still have a Jewish mind (believe me, it’s something unique to us). We grabbed our five kids and moved to Israel some time ago, hoping to stay “indefinitely,” which turned out to be 8 years. I learned a lot there — about Jews, about Israel, about Judaism, and about myself. What does a Jew who has lived for years in Israel see in the Book of Mormon that others might not notice? 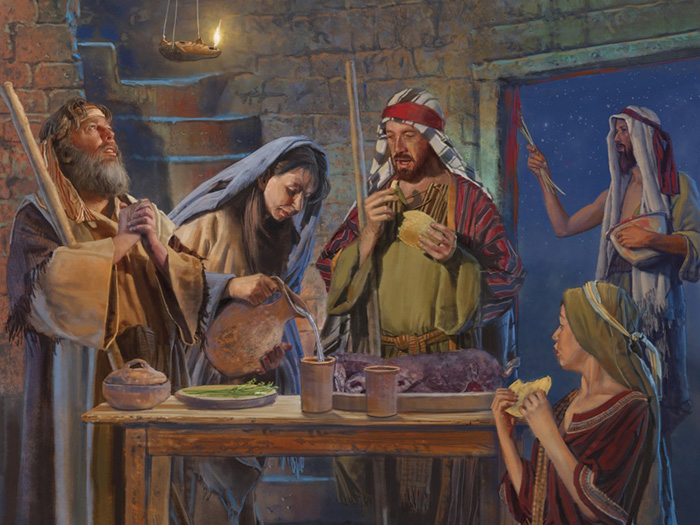 The Passover is the most important holiday of the year for Jews. The first night of the holiday is celebrated with a feast inside a ritual. The recitation of the story about the Israelites’ deliverance from Egypt is the centerpiece of the evening and reason for the holiday.  And, in addition to the story of deliverance and redemption, Jews always include prayers that ALL people may be free from oppression. Whenever the chips are down, whether it’s Passover, or not, Jews hearken back to the miracles God performed for them in the wilderness.

Interesting that when Laman and Lemuel become most belligerent and faithless, Nephi launched into the Passover recitation, including both parts! God saves the Israelites, but is no respecter of persons. (Read it in 1 Nephi 17:23-42.)

Modern scholars have verified that reformed, or hieratic, Egyptian was in use by Jewish scribes in Lehi’s time, and Nephi says the Book of Mormon was written in Hebrew using reformed Egyptian script to save space on difficult-to-inscribe metal plates.

To modern Jews this sounds entirely plausible and can work both ways, depending on what is handier. (So if Hebrew took up less space, you could use the Egyptian language and use Hebrew letters). You use the script that’s the most handy and incorporate the words that mean the most to you. Jewish curses and insults have a high priority. So more recently, Jews have created Ladino (Judeo-Spanish) and Yiddish (Judeo-German, combining German with Aramaic and Hebrew, written in Hebrew script).

3. The Brother of Jared knew about the zohar that lit Noah’s Ark

If you will now turn to Genesis 6:16 and read the verse and the footnote. “A window shalt thou make to the ark, and in a cubit shalt thou finish it above; and the door of the ark shalt thou set in the side thereof; with lower, second, and third stories shalt thou make it.” Notice that the word “window” has been mistranslated, and the footnote says, “HEB tsohar; some rabbis believed it was a precious stone that shone in the ark” (Ether 2:23 (23–24).

The Hebrew word Zohar, means “light” or “brilliance” and that light was connected with magical stones. The Brother of Jared logically thought that if it worked for Noah, it could work for his eight dark ships. Hence, sixteen stones presented to the Savior to be set aglow by His touch.

4. The Book of Mormon has some pretty strong insults for the Jews 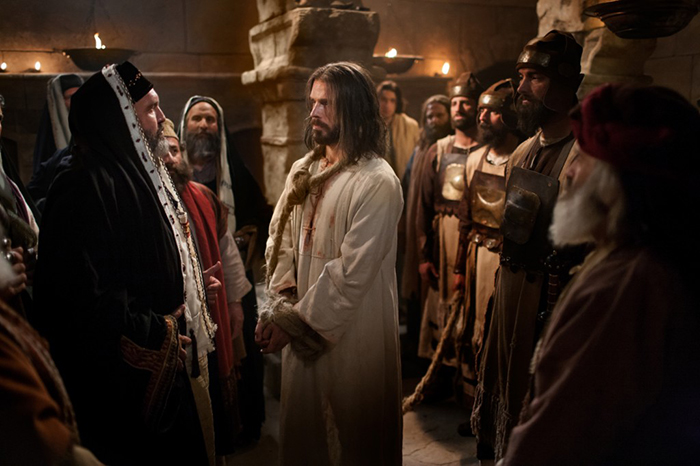 But then, so does the “Old Testament” (which for Jews is the Tanakh, the Torah, the Prophets, and the Writings). Jews are actually pretty chill with insults and are especially good at using them on each other. They are also keen on making sure they don’t repeat the mistakes of the past, so cautionary advice is taken seriously. Two insults are notable in the Book of Mormon.

In 2 Nephi 10:3  Nephi says no other nation would crucify their God. Thinking back to 33 AD, we know of no nations that had a one-God faith. They were all poly-theistic and had many gods. One of my Israeli friends liked to imagine what would have happened if Christ had performed His miracles in Persia. They would have said, “This is fantastic; you’re a god; where would you like your statue?”

Israel had already spent centuries distinguishing itself from those societies and had become more focused on the One God than ever, to the point that they lost focus on the need for a savior or mediator. So yeah, they would have been the only nation that could get to that point.

The other “insult” is found in 2 Nephi 25:2: “For I, Nephi, have not taught them many things concerning the manner of the Jews; for their works were works of darkness, and their doings were doings of abominations.”

Well, so…the Jews Lehi’s family had escaped from were just about to be destroyed for their wickedness. They had had the good fortune of having their exact sins listed for them by their prophets. If they had listened and repented, they would have survived, but they killed the prophets instead. Their works were works of darkness at the time, no arguing with that. The condemnations in the Book of Mormon are no more harsh than those of Jeremiah.

5. “Look, they don’t even keep the Word of Wisdom” 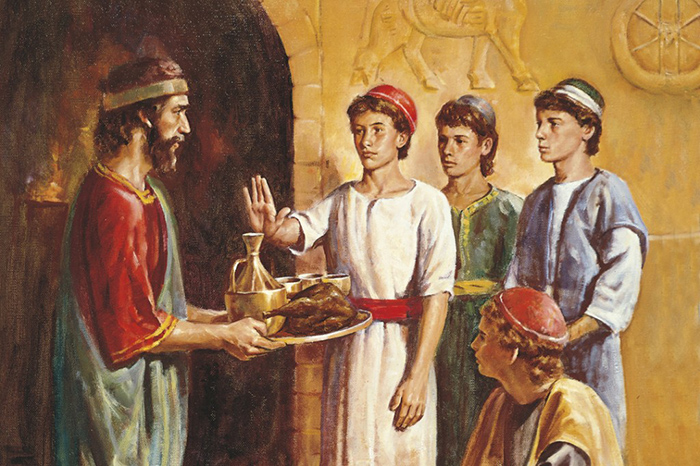 Keeping the Word of Wisdom may not be the most important behavior for Mormons, among all of our commandments, but transgressions of the Word of Wisdom are among the most noticeable. Same with people who don’t keep the Law of Moses. Both Enos and his son Jarom added some barbs to the Book of Mormon to insult the Lamanites, who gave up keeping the dietary laws of the Law of Moses.  Remember that under the Law of Moses Jews couldn’t (can’t) consume the blood of any beast. They also couldn’t (can’t) eat anything but clean beasts, which does not include beasts of prey.

Enos had this to say about the Lamanites (Enos 1:20): “…they became wild, and ferocious, and a blood-thirsty people, full of idolatry and filthiness; feeding upon beasts of prey; dwelling intents, and wandering about in the wilderness with a short skin girdle about their loins and their heads shaven; and their skill was in the bow, and in the cimeter, and the ax. And many of them did eat nothing save it was raw meat; and they were continually seeking to destroy us.”

Jarom also enters the fray, saying, “…And they were exceedingly more numerous than were they of the Nephites; and they loved murder and would drink the blood of beasts” (Jarom 1:6).

6. Living the Law of Moses while looking forward to Christ

Evidently, when Moses established God’s law, he also was clear about the Messiah to come and used His name. The Book of Mormon says over and over that everything in the Law of Moses was meant to typify of Christ. Somehow, many of the exact references have been lost from the biblical account. It is possible that as Jewish leaders codified the Law and set the scriptures, they had a new opposing philosophy to distinguish themselves from. In the ancient past it had been poly-theism, but later it was Christianity. Many verses that could have been construed or obviously read to refer to Christ were then omitted. There’s no way to prove this, but the Book of Mormon peoples were kinder to their prophets and heeded them more often. Note that the writings of Lehi and Nephi were preserved, but many of those of Jeremiah were destroyed.  (See Mosiah 13:27; 1 Nephi 4:15; 2 Nephi 25; Alma 25:15; 30:3; 25:16.)

7. Going UP TO and DOWN FROM Jerusalem

Book of Mormon Central just explained this specifically, but generally, it changes the way you converse with people in Israel even today. Jerusalem is in the mountains, yes, a whopping 2,500 feet of elevation or so. Not very impressive to a Utah Mormon, but much higher than the Dead Sea, the lowest point on earth (about minus 1400 feet).

But if I were to leave Park City (6900 feet) and travel to Jerusalem, I would still be going up. Jerusalem is holy, so you always ascend to it. The Holy Land itself is also always up. So if someone asks you when you arrived in Israel and when you left, you always say, “I came up in this year, and descended in that one.” An immigrant to Israel is called an “ascend-er.” There’s no way Joseph Smith would have known this, so its presence in the Book of Mormon (1 Nephi 3:4, for example) is one more proof that it is what it claims to be.

The families who left Jerusalem would need to ache for home all their lives. That’s what happens when you leave Jerusalem; that’s what happens when you leave Israel. Anyone who’s ever done it knows that. All the chapters Nephi kept from Isaiah and handed down to us have three themes only — Messiah will come; Israel will be scattered; Israel will be gathered. That gave his people hope.

They believed their descendants would someday go home. Said Jacob, “. . . and also our lives passed away like as it were unto us a dream, we being a lonesome and a solemn people, wanderers, cast out from Jerusalem, born in tribulation, in a wilderness, and hated of our brethren, which caused wars and contentions; wherefore, we did mourn out our days” (Jacob 7:26).

Living eight years in Jerusalem, I really got to know olive trees. They have a lot of character and are useful enough both to sustain life and provide imagery for a thousand parables. But did they have them in the Americas? Maybe not. Jacob’s story was a story from home (Jacob 5). His parable of the olive trees parallels the patriarchal blessings given by Father Jacob (Israel) to his sons, and to Ephraim and Manasseh. Judah retains the scepter and rules, while Joseph, through Ephraim, spreads abroad and grafts in the gathered to the central root and stem. As a Jew, this just feels right.

“Lights and Perfections.” As hocus-pocus as these instruments seem to modern folks, they sound perfectly common to Jews who know their ancient history. Seer stones were used anciently and will be used eternally.

Yes, there are plenty of Hebraisms in the Book of Mormon, and Mormon (and non-Mormon) scholars are finding them all the time (chiasmus, desert poetry styles, ancient names of people and places), all of which help to prove the authenticity of the Book of Mormon. But there are plenty of Jewish-isms, too. I sincerely doubt young Joseph Smith was educated enough to create the Hebraisms; I truly doubt he could fathom the Jewish-isms either. What do you think?

Gale is the author of Day’s of Awe: Jewish Holy Days, Symbols & Prophecies for Latter-day Saints.

And check out this article about a Jewish author who loves the Book of Mormon.