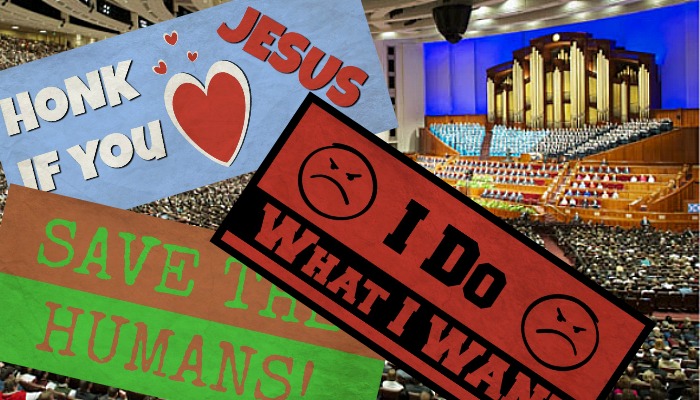 Is it just me or has anyone noticed that general authorities really seem to like quoting bumper stickers? Sometimes they agree with the sticker, sometimes they don’t, and sometimes they’re just joking around. I can think of three or four instances off the top of my head from recent years, but as you’re about to see, there are many more than that. Here’s a look at ten bumper sticker references from years past (along with five runners-up).

1. Have you hugged your child today?

There is a bumper sticker seen much of late that asks the question, ‘Have you hugged your child today?’ How fortunate, how blessed is the child who feels the affection of his parents. That warmth, that love will bear sweet fruit in the years that follow. In large measure the harshness that characterizes so much of our society is an outgrowth of harshness imposed on children years ago.

This bumper sticker appears right at the beginning of G. Homer Durham’s April 1984 talk Jesus the Christ: the Words and Their Meaning. Fun Fact: In the video (above), President Durham (from the presidency of the Quorum of the Seventy) omits the line, “This was not unusual,” an apparent joke that does appear in the text (below).

Recently, while I was driving on the highway, a car passed. This was not unusual. The bumper sticker was a little different, saying, ‘Save the Humans.’ One sees many bumper stickers these days. This one turned my thoughts to something fundamental, the word save. I thought of the plan of salvation. I thought of the world of scholarship, and of Professor Arnold Toynbee’s analysis of the many so-called ‘saviours’ found in history. (A Study of History, abridgment, vols. VII–X, D. C. Somervell, chap. XX Oxford: Oxford University Press, 1957.) We know that one Savior truly saves—the Lord Jesus Christ. This is His church. We have taken upon ourselves His name.

3. Honk if you love Jesus

This bumper sticker reference comes from Elder Thomas S. Monson’s October 1985 General Conference address, Those Who Love Jesus. The reference appears within the first two minutes of the talk.

Driving on the modern freeways during the sunshine of summer is often a pleasant experience. Frequently, one can view the grandeur of majestic mountains and the mesmerizing surf of the sea all in a single drive. However, when the traffic is heavy, the mountains and seas are set aside, and concentration is focused on the car ahead. Such was the occasion when I read with keen interest the words of a bumper sticker readily visible on the highly polished chrome bumper of a car which was weaving in and out of the traffic stream. The words were these: ‘Honk if you love Jesus.’ No one honked. Perhaps each was disturbed by the thoughtless and rude actions of the offending driver. Then, again, would honking be an appropriate manner in which to show one’s love for the Son of God, the Savior of the world, the Redeemer of all mankind? Such was not the pattern provided by Jesus of Nazareth.

This one comes at the beginning of Jack H. Goaslind’s April 1986 talk Happiness.

Last summer I saw an interesting picture as I followed a car on the freeway. It was a large station wagon that had obviously endured many road skirmishes. The top rack was loaded with luggage; the seats were loaded with people. Four bare feet hung out the rear window, and elbows and arms hung out the side windows. In the front seat, the mother was wrestling with a feisty child while simultaneously trying to calm an upset infant. The father was desperately trying to negotiate the heavy traffic. It was obviously vacation time for this family. As I surveyed the situation with some degree of empathy, I noticed a bumper sticker which read, ‘Are we having fun yet?’

5. God put me on earth to accomplish a certain number of things. Right now I am so far behind, I will never die!

This sticker reference comes from Elder M. Russell Ballard’s 1991 Women’s Conference talk Be an Example of the Believers.

To you who feel harried and overwhelmed and who wonder whether you ever will be able to run fast enough to catch the departing train you think you should be on, I suggest that you learn to deal with each day as it comes, doing the best you can, without feelings of guilt or inadequacy. I saw a bumper sticker the other day, sisters, that may say it all:

‘God put me on earth to accomplish a certain number of things. Right now I am so far behind, I will never die!’

This sticker shows up right at the beginning of Elder Wolfgang H. Paul’s 2006 talk The Gift of Agency.

Some time ago, as I was driving, I had to stop at a red light. The vehicle in front of me caught my attention. A sticker read, ‘I do what I want.’

I wondered why someone would choose to place such a statement on his vehicle. What was the message he wanted to send? Perhaps the driver of this vehicle wanted to express publicly that he has achieved total freedom by just doing what he likes to do. As I thought about this, I realized that our world would be quite chaotic if everyone would just do what he or she wants to do.

7. Don’t judge me because I sin differently than you

I don’t know exactly how to articulate this point of not judging others with sufficient eloquence, passion, and persuasion to make it stick. I can quote scripture, I can try to expound doctrine, and I will even quote a bumper sticker I recently saw. It was attached to the back of a car whose driver appeared to be a little rough around the edges, but the words on the sticker taught an insightful lesson. It read, ‘Don’t judge me because I sin differently than you.’

8. Lead me not into temptation. I can find it myself!

Elder Lynn G. Robbins (from the Quorum of the Seventy at the time) gave a devotional at Brigham Young University in September 2013. His address is called Avoid It. Here’s the sticker reference:

A humorous bumper sticker states, ‘Lead me not into temptation. I can find it myself!’ What the Lord’s Prayer actually states, according to the Joseph Smith Translation, is, ‘Suffer us not to be led into temptation.’  The Savior’s counsel in this phrase is to pray for help in avoiding temptation.

And what of those who just want to look at sin or touch it from a distance? Jesus said with a flash, if your eye offends you, pluck it out. If your hand offends you, cut it off.12 ‘I came not to [bring] peace, but a sword,’13 He warned those who thought He spoke only soothing platitudes. No wonder that, sermon after sermon, the local communities ‘pray[ed] him to depart out of their coasts.’14 No wonder, miracle after miracle, His power was attributed not to God but to the devil.15 It is obvious that the bumper sticker question ‘What would Jesus do?’ will not always bring a popular response.

This one also comes from Elder Jeffrey R. Holland. This talk comes from our most recent General Conference in April 2018. It’s called Be With and Strengthen Them. The reference comes up as he points out to members that the new ministering program (replacing Home/Visiting Teaching) should elicit more of our attention than the previous program ever did.

However, I should stress that this expansive new view does not include the sorry statement I recently saw on an automobile bumper sticker. It read, ‘If I honk, you’ve been home taught.’ Please, please, brethren (the sisters would never be guilty of that—I speak to the brethren of the Church), with these adjustments we want more care and concern, not less.

Sometimes speakers at General Conference (and elsewhere) reference bumper stickers but aren’t exactly quoting one specifically. Many of those references appear in the following list of runners-up.

Imagine seeing, for the first time, nine children and two beleaguered parents in a beat-up station wagon with a bumper sticker reading, ‘Families are Forever.’ The puzzled nonmember doesn’t know if this is a boast or a complaint.

Many think of peace as the absence of war. Everyone wants that kind of peace. Songs celebrate it, and bumper stickers proclaim it.

For some months, I’ve tried to emphasize repentance, one of the most vital and merciful doctrines of the kingdom. It is too little understood, too little applied by us all, as if it were merely a word on a bumper sticker.

4. From Elder L. Tom Perry’s BYU devotional address And Jesus Increased in Wisdom and Stature, and in Favour with God and Man:

The work ethic seems to be a foreign concept to many people. We don’t work as hard or as long as we should. Too many in this day and age have bumper stickers on their cars that read, ‘I’m in no hurry, I’m only on my way to school.’

Divine doctrines cannot be squeezed into compact molds to make them fit fashionable patterns of the day. Nor can they be fully expressed on a bumper sticker.

Did we miss any bumper sticker references? Let us know in the comments section!