Scripture Book of Mormon 15 Accurate Theme Songs for All 15 Books of The Book of... 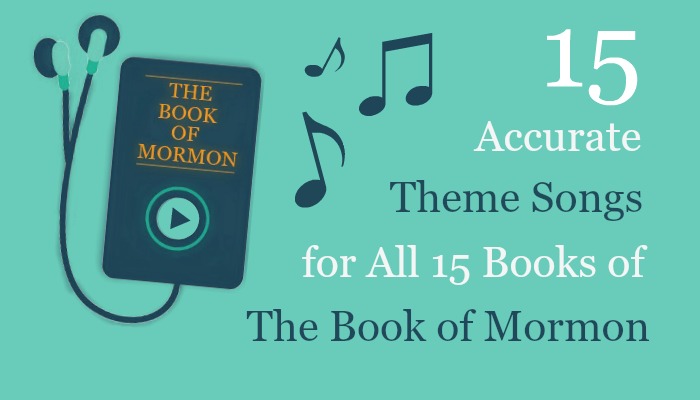 Question: If each book of The Book of Mormon were assigned a theme song, what would those songs be? This article attempts to explore the answer to that question. I’ve scoured the internet and think I’ve found some pretty good songs that have been pretty big hits over the years. Of course, not every song is going to fit exactly, but use a little imagination and you’ll see the parallels.

An account of Lehi and his wife Sariah, and his four sons, being called, (beginning at the eldest) Laman, Lemuel, Sam, and Nephi. The Lord warns Lehi to depart out of the land of Jerusalem, because he prophesieth unto the people concerning their iniquity and they seek to destroy his life. He taketh three days’ journey into the wilderness with his family. Nephi taketh his brethren and returneth to the land of Jerusalem after the record of the Jews. The account of their sufferings. They take the daughters of Ishmael to wife. They take their families and depart into the wilderness. Their sufferings and afflictions in the wilderness. The course of their travels. They come to the large waters. Nephi’s brethren rebel against him. He confoundeth them, and buildeth a ship. They call the name of the place Bountiful. They cross the large waters into the promised land, and so forth. This is according to the account of Nephi; or in other words, I, Nephi, wrote this record.

Song: Horse With No Name, by America

Topics this song hits: A journey through the desert wilderness, references to rivers, arriving at the land Bountiful/the sea.

An account of the death of Lehi. Nephi’s brethren rebel against him. The Lord warns Nephi to depart into the wilderness. His journeyings in the wilderness, and so forth.

Topics this song hits: Nephi finally leaving the toxic relationship between he and his brothers to forge his own path. Just switch the lyric “baby” with “brothers.”

The words of his preaching unto his brethren. He confoundeth a man who seeketh to overthrow the doctrine of Christ. A few words concerning the history of the people of Nephi.

Song: God’s Gonna Cut You Down, by Johnny Cash

Topics this song hits: Jacob preaching to his people, allegory of the olive trees.

Enos prays mightily and gains a remission of his sins—The voice of the Lord comes into his mind, promising salvation for the Lamanites in a future day—The Nephites sought to reclaim the Lamanites—Enos rejoices in his Redeemer. About 420 B.C.

Song: Down to the River to Pray, by Alison Krauss

Topics this song hits: Enos pondering the gospel, praying earnestly first for himself, then praying for pretty much everyone else.

Book summary: There is no official book summary for Jarom, but here’s the chapter summary (the book is only one chapter):

The Nephites keep the law of Moses, look forward to the coming of Christ, and prosper in the land—Many prophets labor to keep the people in the way of truth. About 399–361 B.C.

Song: Preacher, by One Republic

Topics this song hits: Genealogy, admonition from the prophets, and the stuff that matters most.

Omni, Amaron, Chemish, Abinadom, and Amaleki, each in turn, keep the records—Mosiah discovers the people of Zarahemla, who came from Jerusalem in the days of Zedekiah—Mosiah is made king over them—The descendants of Mulek at Zarahemla had discovered Coriantumr, the last of the Jaredites—King Benjamin succeeds Mosiah—Men should offer their souls as an offering to Christ. About 323–130 B.C.

Song: We Didn’t Start the Fire, by Billy Joel

Topics this song hits: A lot of names in a short amount of time, also a large span of years condensed into a few minutes.

Mormon abridges the large plates of Nephi—He puts the small plates with the other plates—King Benjamin establishes peace in the land. About A.D. 385.

Song: Intermission music, from Monty Python and the Holy Grail

Topics this song hits: The bridge between two sections of The Book of Mormon.

There are 29 chapters in Mosiah, but no book summary on its title page. That said, the most notable event from Mosiah is probably King Benjamin’s final address to his people, which this song correlates with nicely.

Song: Dust in the Wind, by Kansas

Topics this song hits: King Benjamin’s sermon, causing listeners to view themselves as “even less than the dust of the earth.”

Topics this song hits: War between two nations that are quite prejudiced against one another.

Maybe better known as the book where the Gadianton robbers almost ruin everything.

Song: You’ve Got to Pick a Pocket or Two, from Oliver!

Topics this song hits: People wanting to avoid playing by the rules at the expense of others.

Better known as the book in which natural disasters darken the land, cities burn, sink, or are otherwise destroyed, and then Jesus Christ visits the Americas and preaches His gospel.

An account of the people of Nephi, according to his record.

Topics this song hits: Civilization comes crashing down as society is once again caught in the pride cycle.

Topics this song hits: Mormon mourning for the destruction of his people.

The record of the Jaredites, taken from the twenty-four plates found by the people of Limhi in the days of King Mosiah.

Song: He Ain’t Heavy, He’s My Brother, by The Hollies

Topics this song hits: A long journey from which there is no return, undertaken by Jared and his brother, whose name (Mahonri Moriancumr) was apparently so burdensome to engrave that it was not included in the text.

There is no book summary for Moroni, but it’s the last book of The Book of Mormon. It contains the words of Mormon’s son, Moroni, who buried the record and, as an angel, later helped Joseph Smith recover it.

Song: Waiting on the World to Change, by John Mayor

Topics this song hits: Words from a misunderstood man who, despite his prophetic calling, has been unable to change the world.

Alright, now that you’ve had a bit of a musical overview of The Book of Mormon, go read it!

These are the best songs I could find, but can you think of any that would fit better? Let me know in the comments!