Life Adventures of a Mormon Girl in the Military 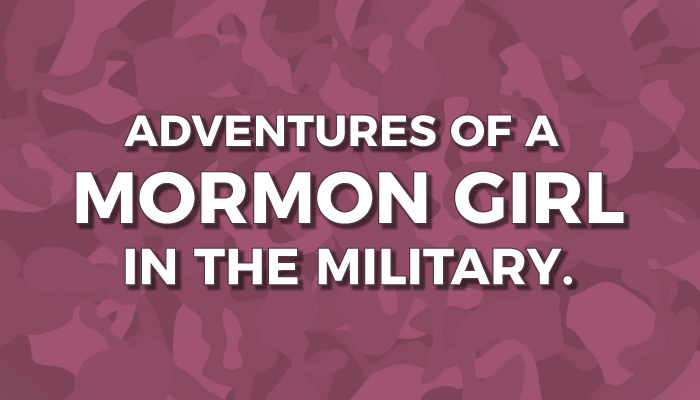 Just to warn you, these are the experiences of an enlisted person in the Army National Guard. I wish I could tell you what an officer experiences, but I can’t. Lots of my fellow grunts came from very tough backgrounds—the Army was a step up for them as far as lifestyle and security were concerned.

I was pretty decided in high school about my standards. Tastes of beer, wine, and coffee as a little kid strengthened that. So there were really no temptations in school for me to stray from keeping the Word of Wisdom. The military was a whole different ball game.

A whole different world, actually. In July of 2005 I stood in front of the US Flag and pledged my loyalty to it and to my country. (That’s fancy talk for, I joined the US Army.) One month later, I was shipped off to South Carolina for boot camp. Given the iron clad restrictions on most things—seriously, we weren’t even allowed to have soda—alcohol and cigarettes were not an issue in boot camp. It was when they shipped me off to AIT (Advanced Individual Training) in Augusta, Georgia, that I was truly tested.

AIT is not like boot camp. There aren’t people telling you what to do every moment of the day. They only do that for half the day. It’s more like a job. After morning physical training, showers, breakfast, classes, lunch, more classes, and final formation (at 5 Pm), our time was our own. And the freedoms we enjoyed during that time were based on how long we’d been in training.

The first month or two, you’re still restricted. After that, you have a TON more freedoms. These included going off base, going to movies, bowling, going to bars and clubs… things of that nature. Smoking was something you could always do, no matter your status. It was when I, and the group I had come in with, had more freedoms that peer pressure started to come into play. And it was NOT what I expected.

What I expected was a scenario like those cheesy D.A.R.E videos. Where the kids shove a beer or a cigarette in your face and tell you that you aren’t cool until you drink/smoke. But that wasn’t the case. Sure, people tried to get me to come out drinking with them. But they never shoved temptation in my face or thought I was “uncool” because I wouldn’t drink.

What it was really like… was lonely. In the company that I was with, there was only one other person who classified themselves as Mormon. And even that person would head out to the bar every chance they could get.

I made friends, in AIT, but they all drank, or smoked, or did drugs, or other things. So when we got more freedoms, they took off as quickly as they could to places that I was not comfortable going to. Leaving me alone in the commons room, watching Cedric the Entertainer, or Chris Brown’s latest Music Videos. I believe I also took that time to make my way through the Harry Potter series.

And that was fine. It was nice to have time to myself after a day of being yelled at and being forced to do pushups and other things. But I was still lonely. Military training is no joke. It tries you mentally, physically and emotionally. And when you don’t have anyone to talk to or to lean on, it only makes it worse.

My friends never stopped inviting me to go drink with them. I once asked why they were so adamant that I drink. And they told me. “You’re the funniest person sober. You’d be the funniest drunk.” Still, I would decline their offer. But every time they invited me, I hesitated that much more to say no.

I wanted to be with my friends. I wanted to “fit in.” I wanted the drill sergeant on duty to stop asking what was wrong with me when I was the only one in the commons room. Every day that this weighed on me, I inched closer and closer to giving in—to justify my reasoning for putting myself in situations that God couldn’t be with me. And it wasn’t just the alcohol. It was the smoking as well.

I have a clear memory of being at the track bleachers on base. I was standing to the side, while a few of my friends (and a few people I didn’t like) were on the bleachers, smoking. Not only smoking but talking and laughing and having a good time. While I stood to the side, awkwardly, and tried to be a part of the group. At one point, a certain friend turned to look at me. He sincerely smiled and held out a lite cigarette for me, and asked. “Do you want one?” And in that moment, I felt weaker in my moral standings, than I ever had.

Every part of me wanted to reach out and take that cigarette. I wanted to step onto the bleachers and be with my friends. I wanted to be accepted and loved. No matter what it meant to my body or to my spirit. To this day, I don’t know how I had the strength to decline their offer and walk away, but I did. And I will tell you now, it hurt.

Every hope that I had of being a part of something other than myself was crushed down with every step I took, walking away. I don’t remember what happened after that. I do, however, remember many other nights, alone, in my barracks, where I cried and grumbled and cursed the fact that I was so set in my ways. But the crying and the grumbling and the cursing came to a halt in the most unfortunate way.

There was a boy (and I say boy because he was only 18) who was the nicest and most innocent guy in the company. Like me, he didn’t drink or smoke, or do drugs or have relations outside of marriage. But he was a lower level, so he was doing military “chores” during my free times. Meaning, we couldn’t hang out.

He had a light about him. He always smiled and pushed through the hard times with jokes and such. And then the time came that he could go off base. It was during a three-day weekend, as well. I stayed on base that weekend, while he went off with a bunch of other people. And when he came back, his light was completely gone.

It turned out that over the weekend he had done everything… and I mean EVERYTHING… that he had never done before. It was that moment that solidified my faith and my convictions. He looked so pleased with himself. His “buddies” were pleased with him too. But I could see what he had truly done to himself, all in the name of “fitting in.” I swore to myself, in that moment, that I would never let my light extinguish like he did.

After that, it was easier than ever to say no. It wasn’t just that experience that helped me, but it was how, after it happened, I immersed myself in God’s light. Through prayer, the scriptures, attending church, service—anything that I could do to keep my light glowing.

And it showed. I had a few experiences where people in my company came to me and asked me how I could get through the hard times. Or how I always seemed happy. I regret not having as much courage back then to really explain to them what I was doing. But I hope that I said enough to make them think about why they weren’t happy or why they were struggling.

I will always be grateful for the experiences, spiritually, mentally, and physically, that I had in the military. But more than that, I will forever be grateful for the gospel, for my parents who raised me and taught me how to say no, and for my Savior, who is my rock, my shield, my comfort and my light, in this darkening and frightening world.

Have you stuck to your standards in the military? Share your experiences in the comments below. 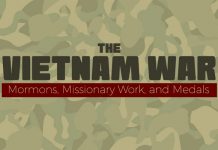 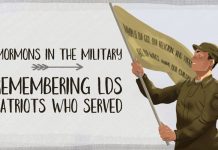 Mormons in the Military: Remembering LDS Patriots Who Served 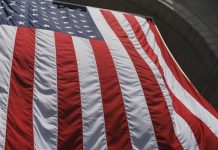 US Army Chaplain: “One day, a SCUD missile breached our defenses” . . .