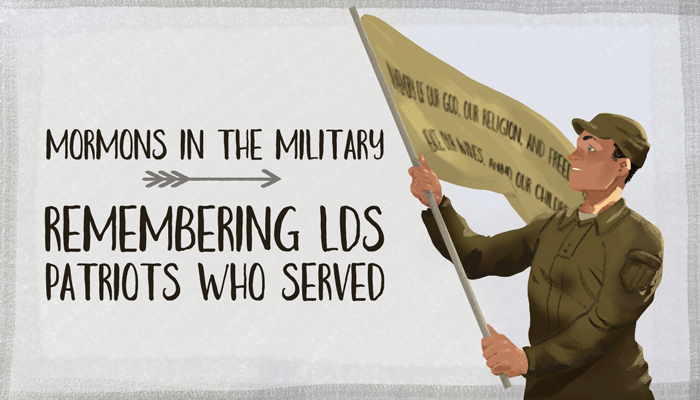 Mormons have a proud heritage of serving in the military dating back to the days of the Mormon Battalion. In 1846, the United States of America needed men to fight Mexico, and the LDS people, just recently pushed out of the U.S. in order to exercise religious freedom, responded to the call.

This patriotism goes back even further to Captain Moroni and The Book of Mormon. This staunch patriot who loathed the shedding of blood, gathered the righteous to fight for “our God, our religion, and freedom, and our peace, our wives, and our children” (Alma 46:12). In every war, faithful members of the Church have stepped forward to preserve this same freedom time and again. On this Memorial Day when we honor the valiant dead, we remember Mormons in the military, both dead and alive.

According to Meridian Magazine, over 100,000 Mormons served during World War II, 10% of all LDS people. Of this number, 5,000 never came home. There are many of these brave men whose names you will never know. You won’t know of their patriotism and suffering, the families they left behind, their hopes and dreams. But you can understand a piece of what they experienced through the stories of other Mormons in the military:

Americans made up the bulk of the LDS members who served during World War II, some of whom later became apostles and prophets. President Thomas S. Monson, a sailor in the Navy during the war, told about being one of the few Mormons in boot camp. But those few were a band of brothers. It was during the war that President Monson gave his first priesthood blessing to a sick soldier.

If this isn’t evidence of the importance of being worthy to hold the priesthood, he tells a story, as related by a war correspondent, about a pair of Marines serving in the Pacific during the war. Tasked with taking Kwajalein Atoll, two marines, at least one of whom was LDS, were gravely injured. The first dragged his buddy from the water and gave him a priesthood blessing, telling him “I command you, in the name of Jesus Christ and by the power of the priesthood, to remain alive until I can get medical help.” Miraculously, to the war correspondent’s utter surprise, both men survived.

Elder L.Tom Perry also experienced the joy of finding a brother in Christ to watch his back during war. Not only did Elder Perry serve beside another Mormon member as a Marine during the war, but it was the same boy that served as his companion on their previous LDS mission to Ohio. The two served together, studied together, taught the gospel to other soldiers, and took the sacrament regularly, thanks to a few humble implements stored in a green foot locker.

Elder Neal A. Maxwell, an infantryman in the army, took advantage of the blessings of the Gospel, even in a foxhole. On Sundays, he blessed his own Sacrament, a modest C-ration biscuit and rainwater. Like Elder Maxwell, Grant B. Bitter held church services during wartime. These Sunday meetings blessed him and others in unique ways, culminating in the conversion of a fellow sailor, Rufus Boldman.

President Boyd K. Packer managed to preach the gospel on a larger scale as Air Force pilot during World War II. He used off-duty hours to teach the gospel to the Japanese. However, sometimes the most effective way of sharing the gospel is by example. Herbert A. Frost did this and more by choosing to live the standards of the gospel, like observing Fast Sunday, as his fellow soldiers looked on.

Living the gospel benefited the soldiers as well. In the October 2016 General Conference, President Monson spoke of John A. Larsen. Larsen was able to climb a 40-foot rope and save his life because of the strength given to him for living the Word of Wisdom. And Lloyd Richens, as told in LDS Living, felt peace amidst the horrors of war by studying the Book of Mormon.

Americans weren’t the only LDS in the war. Members served in the Allied and Axis armies. A Dutch church member, as related in chapter 40 of Church History In The Fulness Of Times, made an opportunity out of being a prisoner of war. He taught the Gospel to his fellow POWs, at least one of whom was later baptized.

German soldiers might have been on the other side of the war, but those church members among them did what they could to help others, like sharing their rations with hungry Norwegians. Bruce Crandall expands upon this in the March 1994 Ensign when he talks about his German grandfather. As a German soldier for Nazi Germany, Crandall’s grandfather, Opi, did the only thing he could at the time: he lived the golden rule. In fact, showing kindness to a Russian POW saved his life. The same Russian that he helped freed him from a Russian POW camp when he was captured: “My life was spared, I believe, because I had tried to follow the words of the Savior.”

Although the German and American Saints fought on different sides, they remained brothers in the Gospel. They forgave each other and sang together as did John, the German immigrant and former SS soldier, and Brother Hyde, the crippled former American soldier. In the July 1978 Ensign, Don A. Aslett told how these two former enemies met in love and forgiveness.

Elder Russel M. Nelson and Elder Robert D. Hales both served in the Korean War. The latter drew spiritual lessons from his time in war, such as the importance of returning with honor—Elder Hale’s squadron’s motto—and flying even with the horizon.

Although not all righteous Mormons in the military survive war, many are protected because they are faithful to their covenants. Bill Harrison kept the commandments in accordance with a blessing that guaranteed his survival if he was righteous. He then avoided a fatal head shot while flying under enemy fire by a mere two inches.

Following in the footsteps of those missionary soldiers in World War II, Howard Bradshaw held church services while in Korea. Many soldiers from his unit and Koreans eventually accepted the Gospel.

The Vietnam War saw the deployment of more than 2,000 LDS soldiers. President Gordon B. Hinckley, as quoted by Dennis A. Wright, summed up the good that could come of the horror of war by saying:

“But notwithstanding the evil and the tragedy, I see a silver thread shining through the dark and bloody tapestry of conflict. I see the finger of the Lord plucking some good from the evil designs of the adversary.”

Virgil Kovalenko “plucked good” by doing missionary work as he consulted for the Vietnamese Air Force. More than one person joined the Church through his dedication. This good shines forth in the experience of Larry Maloy and his friend, Rich. In the July 1976 Ensign, Larry tells about an explosion that gravely injured his friend. Had it not been for the whisperings of the Spirit, he would have been injured as well. Had it not been for a Priesthood blessing, Rich might not have survived.

This closeness to the Spirit allowed William E. Phipps, Jr. to save the life of an innocent woman and child when they wandered into a military operation as detailed in the August 1979 Ensign. It also saved Larry Chesley. Upon requesting that the Lord give him back the boots taken from him, he received them. He could then survive the physical difficulties placed upon him for seven years in a POW camp.

Even now, LDS men and women serve in the military, seeking to share goodness and spreading the Gospel in little ways. Jill Shepherd, deployed to Afghanistan, kept a picture and quotes of Captain Moroni within view to give her strength. Warren Price, a medic, depended on the Gospel to get him through the hard times. Rachael Neff, an intelligence officer, used the Spirit to save lives.

Other members of the Church—many of whom are fresh off of missions—have joined the armed forces in order to serve others. Mormons in the military do what they can to spread freedom and goodness to the world. What are your stories of serving in the military?