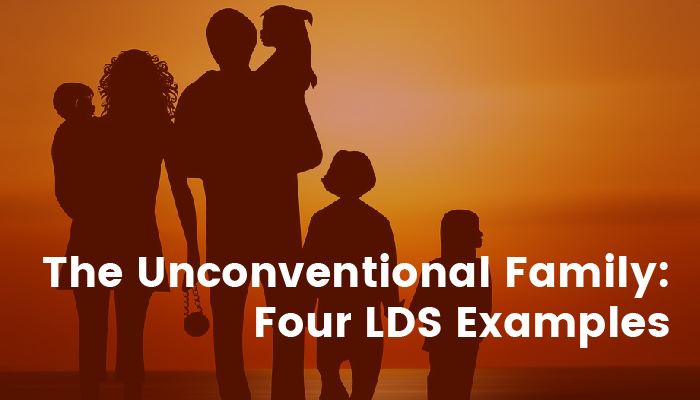 A “Conventional Family” in the LDS church is one with stay-at-home mother and working father. As stated in The Family: A Proclamation to the World:

“By divine design, fathers are to preside over their families in love and righteousness and are responsible to provide the necessities of life and protection for their families. Mothers are primarily responsible for the nurture of their children. In these sacred responsibilities, fathers and mothers are obligated to help one another as equal partners.”

My husband and I talked about what we planned to do when we decide to start a family. Growing up, he expected to have his future wife stay home with the kids. So when we got married, he shared that once he establishes a job and we start a family, I will be staying home. However, I want to be able to work. I know I probably won’t work when we start having kids. But I hope to work while my children are in school.

Although this lifestyle is by far the most “normal” for LDS families, not all Latter-day Saint households are so conventional. There are families who compete in sports on Sundays, families that travel around the world, and mothers who choose to work. But this doesn’t make them any less approved than your standard Mormon family. The Family: A Proclamation to the World says so itself:

“…Other circumstances may necessitate individual adaptation.”

Each of these unconventional LDS families consulted Heavenly Father as they made their decisions on how to structure their families and family time. The courses of action they choose were approved by the Spirit.

Jane Clayson Johnson had been an anchorwoman for many years. She was a reporter for KSL, ABC News and CBS. She had the opportunity to interview the President and Martha Stewart. Jane was a successful reporter with a soaring career, but there was something missing in her life.

She was married and then divorced. She attended college but hoped to find her eternal husband. But her broadcasting career chose her when she was at BYU. The path she has taken is not the plan she had in mind.

“I had this career, which I had never planned on and, frankly, didn’t always want… I had to learn to put everything I had on the altar of God—my fears, my anxiety, my hopes, my dreams—give it all to Him. When I did that, things changed… It was a very pivotal moment for me.”

When Jane was awarded the position to be a co-host for The Early Show, she received a phone call from Elder Neal A. Maxwell of the Quorum of the Twelve. He told her that he had a prompting to give her a blessing before she started at CBS. While she received her blessing, Elder Maxwell said:

Her experience in network television was incredible. However, after many years in her career, she was finally ready to settle down. She wanted to start a family and become a full-time mother. Many were amazed by the choice she finally made.

Vivian Muñoz is a working mother of seven children. She is a doctor and a nutritionist who works in her private practice and on television.

“The Church of Jesus Christ of Latter-day Saints has helped me see the priority in life that brings true joy. It’s family.”

She made the decision to be home and take care of her children. However, she wasn’t a stay-at-home mother. She wasn’t like most doctors in her location. Instead of visiting with her patients in her office in the evening, she would see them in the morning while her children were in school. This decision created the opposite schedule from what most doctors found successful.

“I realized I had to pray and ask God for the faith that things would go well… I came to know that God really loved me and he knew me personally. He has allowed me to help and be with my children…”

Sarah is a energetic mother of one. She started as a receptionist, which led her to create publicity for television shows.

Sarah was at the highest point of her career. She had many opportunities to interview celebrities and go to big events. But while she was at a big motoring event, she received a call from her daughter. Mia asked her if she would come home because she missed her mom a lot. That’s when Sarah realized she needed to stop working and become a stay-at-home mother.

“All of a sudden I thought, I need to be home… That was the moment where I decided to be a full-time mother…”

Parents have a sacred duty to rear their children in love and righteousness, to provide for their physical and spiritual needs, and to teach them to love and serve one another, observe the commandments of God, and be law-abiding citizens wherever they live.

The Family: A Proclamation to the World
The First Presidency and Council of the Twelve Apostles

After Garrett sold his business, he and Jessica decided they weren’t ready to settle into a home yet. So, they sold everything, from their furniture to their cars, and planned to travel around the world with their two children, Dorothy and Manilla. The couple packed up two backpacks and two carry-on bags and were off to start their journey.

They were criticized for their lifestyle, as it’s atypical for an LDS family. But, those criticisms could never discourage them. Instead “they stay grounded through service, learning, and cultural experiences.”

Whenever the Gee family travels to a new country, they try to find some service to do. They also attend church services, even if it’s of a different religion.

“We have a few objectives and focuses as we travel,” Garrett explained. “We want to strengthen our marriage and family, we want to focus on service and compassion, and we want to learn how to be happy with less.”

We shouldn’t jump to conclusions when LDS families decide not follow the LDS traditional family structures. Heavenly Father has a personal plan for each of his children, and that can take us down roads that appear outside the mold.  Sometimes it’s only temporary. An unconventional family’s decision is between them and God and is based on the revelation received from Him.

Has the Spirit led you to a unique family pattern of living? Share with us in the comments below.