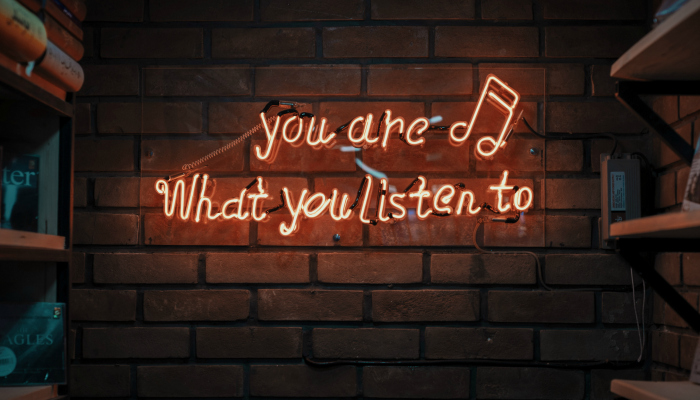 Music is undeniably powerful. It can inspire you to be a better person (thank you, brother Groban), it can comfort you when you’re down, it can invite the Spirit of God.

OR … it can incline Libyan rebels in the 1990s to say, “I only listen to 2Pac before going to shoot Gaddafi boys.”

We readily recognize and embrace the positive influence of music, but how often do we brush off lyrics promoting violence, sex, sexual violence, or illicit drug use, as something that “doesn’t affect” us? It does. And that’s why the top music charts I’m looking at right now are deeply troubling to me, as they should be to you. Take a look at just the first half of the United States Top 50 playlist, according to Spotify as of January 29, 2019 (click to enlarge): 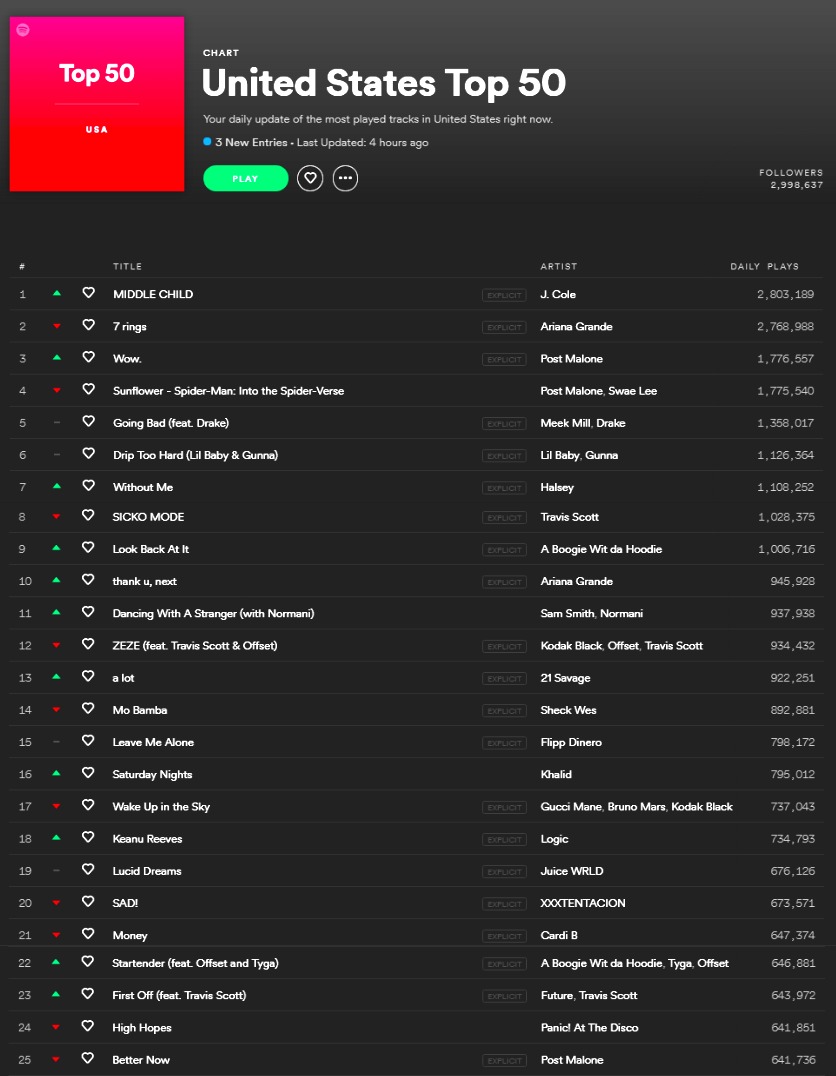 This is a problem

Notice something? Out of 25 songs, 21 are marked “EXPLICIT.” The second half of the list is slightly better, but not good by any means (total of 34/50 explicit). These are cold, hard facts. This is what people are consuming. And to be clear, I’m not some overly-protective PTA dad that has something against “that rap music devilry.” I’m a 27-year old dude that likes music just as much as the next guy.

But it is worthwhile to pose the question for all parents out there: Do you know what your kids are listening to? Because if they are trending in the same direction as the rest of the country, if they’re listening to the same music as some of their friends, now would be a good time to be concerned.

The top-played song in the country, MIDDLE CHILD, has a chorus that starts thusly…

Music is influence. There’s a reason restaurant chains invest so much in a catchy jingle. They’re designed to make you want their food, to get their message in your head. Some of them do a great job.

Now, consider the messages these lyrics from some of the songs on the United States’ top 50 are trying to send:

Whoever said money can’t solve your problems? / Must not have had enough money to solve ’em / They say, “Which one?” I say, “Nah, I want all of ’em” / Happiness is the same price as red-bottoms… (7 Rings, by Ariana Grande)

Sippin’ lean, cliche / I still do it anyway / Red or purple in the cup / Which one shall I pick today-ay-ay? / Sippin’ hard / Gun on me, no need for bodyguard / Aim at your body parts, yuh / Take off your body parts… (Armed and Dangerous, by Juice WRLD. “Lean” is a reference to a drink composed of candy, soda, and red or purple cough syrup.)

XXXTENTACION has five songs on the Top 50 list. Last year, before he could answer for accusations of violent crimes against women, he was shot and killed in Florida. The question is, in the era of #MeToo, how is it possible that so many millions of people are tacitly voicing their approval for his lyrics? The words rationalize promiscuity and the objectification of women with, “they talk too much.”

Some music is spiritually destructive … It is far more dangerous than you may suppose, for it can smother your spiritual sense.

Attacking all the senses

If I put myself in Satan’s shoes (which must be some form of diabolical heels when I think about it), and I’m trying to lead God’s children “carefully down to Hell” in any way I can, I’m going to attack all of the five senses, including hearing. What better and more subtle way to do that than with a catchy tune and a few rhymes? Of course I’m not condemning people to Hell for listening to Cardi B, but I agree with Elder Jeffrey R. Holland when he said that “Satan is a real being set on destroying [us], and [we] face his influence at a younger and younger age.” Music is simply one of those tools that can be used for good and evil.

We can’t keep justifying this filth with, “Oh I don’t listen to the lyrics, I just like the beat.” Back in 2008, the New York Times reported,

Teenagers listen to an average of nearly 2.5 hours of music per day. Guess what they’re hearing about?

One in three popular songs contains explicit references to drug or alcohol use, according to a new report in The Archives of Pediatrics and Adolescent Medicine. That means kids are receiving about 35 references to substance abuse for every hour of music they listen to, the authors determined.

That was 2008. One in three songs were explicit. We got updated numbers from Newsweek in 2017:

More than two thirds of Billboard 100 number one songs that charted in 2017 feature explicit lyrics, a new study shows based on Spotify API data … Data shows that up till 2001, only five songs with explicit lyrics made it to number one, but since then, explicit chart toppers have rocketed by 833 percent.

The current Billboard “Hot 100” (also mostly explicit content) features such inspiring titles as, Murder On My Mind, Pure Cocaine, and Call the Coroner.

That’s a good question. Spotify doesn’t have a standard for what is and isn’t considered explicit. They tag their songs according to the information given to them by the rights-holders of the songs. This makes sense, but it’s also risky, because songs slip through the cracks. Just yesterday I was listening to Spotify when a song dropped an unexpected F-bomb. It was not marked explicit.

To put this in terms we’re probably more familiar with, an explicit track probably falls within the range of a PG13 to an extremely R-rated movie.

We consume all kinds of media. Movies, video games, books, social media, surfing the web, etc. If you were to discover that between 50 to 70  percent of the books your child reads feature explicit content, how would you react? What about 50 to 70 percent of the content they consume on social media? It’s a scary thought.

These statistics should alarm you. Red flags should be going off in your head. For some families, this music is slipping right past their radar and into their homes. Moral of the story: Be careful. Talk with your kids. Be aware of what kind of music they’ve got downloaded onto their phone, or what they’re listening to on Spotify or Pandora. And make sure the example you’re setting for them is a positive one.

The Devil really is a fellow of wine and song,
Playing a tune that trades right for wrong.
The tone-deaf man will hear his notes and say,
What could be wrong with being festive and gay?
And when a sad tomorrow that tune does bring,
Few will know that from their own lips it did spring.

For more information and statistics about explicit music trends, check out these links:

The Atlantic: 92% of Top Ten Billboard Songs Are About Sex (This article is a bit graphic)

Newsweek: Parental Advisory: How Songs With Explicit Lyrics Came to Dominate the Charts

The New American: Influential Beats: The Cultural Impact of Music

What Kind of Impact Does Our Music Really Make on Society?