Scripture Book of Mormon What the Heck, Guys. Have We Just Forgotten About The Book of... 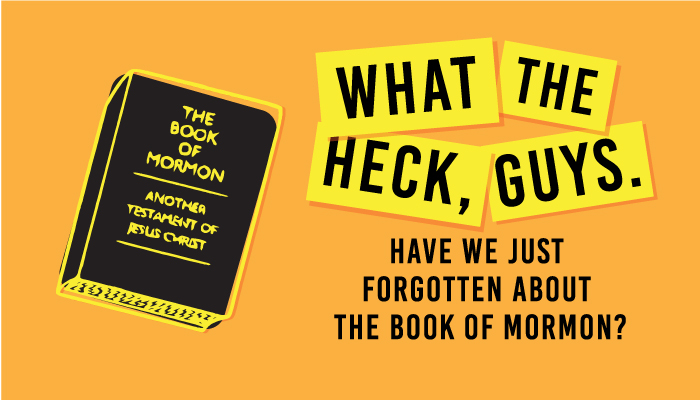 The internet is a scary place for Mormons nowadays. Persecution that previously took the form of raids and picketing now manifests itself in online harassment and mudslinging. Disturbing stories from Church history have come to light. Some of them are false. Some of them are true. Some of them are a bit of both, which is even more dangerous.

To make matters worse, any topic related to Mormonism online is almost always sure to be extremely polarized. On one side you’ve got the membership trying to defend the Church (this website, for example), and on the other side you’ve got the opposite. There is a surprisingly huge number of individuals who seem to have taken it upon themselves to destroy the reputation and credibility of the Church in any way they can.

Amidst the storm of controversy and doubt I have to ask: Have we just forgotten about The Book of Mormon?

The Book of Mormon … you remember

You know, it’s that book that God gave us as evidence of the truthfulness of the restoration of the gospel. It’s been here this whole time over there on your shelf. Why aren’t we using it anymore? Is its convincing power suddenly nullified by the knowledge that Church history isn’t as fantastic as the primary songs might make it out to be?

Too many members are leaving the Church as if The Book of Mormon never existed. It’s like it’s no longer a factor in their spiritual decision-making. But this has been one of the book’s intended purposes from the beginning: To stand as physical and spiritual evidence. Have we grown tired of its message; of its power? Do we remember it in times of trouble or doubt and think, “Eh, give me something new”?

Either it is or it isn’t

That is the genius of the Book of Mormon—there is no middle ground. It is either the word of God as professed, or it is a total fraud. This book does not merely claim to be a moral treatise or theological commentary or collection of insightful writings. It claims to be the word of God—every sentence, every verse, every page. Joseph Smith declared that an angel of God directed him to gold plates, which contained the writings of prophets in ancient America, and that he translated those plates by divine powers. If that story is true, then the Book of Mormon is holy scripture, just as it professes to be; if not, it is a sophisticated but, nonetheless, diabolical hoax.

Never mind the fact that this 531-page-long book was “written” in about 65 working days by an uneducated farmer in his early twenties.

Never mind its geographical and genealogical consistency throughout its pages.

Never mind the fact that it’s changed the lives of millions throughout the world.

The physical evidence is all well and good, but as you’ve heard countless times in Sunday School, it’s not enough. You’ve got to have your own personal spiritual witness of its divine origin, and you’ve got to renew it often. I know I’m beating a dead horse, but after seeing too many friends fall away, I’m more convinced of that principle than ever before.

You know what to do. Moroni’s instructions haven’t changed:

If The Book of Mormon is true, be at peace

If The Book of Mormon is true, give your brain a breather. You’re where you should be. In 1986, President Ezra Taft Benson said the following:

The coming forth of the Book of Mormon preceded the restoration of the priesthood. It was published just a few days before the Church was organized. The Saints were given the Book of Mormon to read before they were given the revelations outlining such great doctrines as the three degrees of glory, celestial marriage, or work for the dead. It came before priesthood quorums and Church organization. Doesn’t this tell us something about how the Lord views this sacred work?

As Elder Jeffrey R. Holland said of those members who do cast it aside,

If he or she leaves this Church, it must be done by crawling over or under or around the Book of Mormon to make that exit. In that sense the book is what Christ Himself was said to be: ‘a stone of stumbling, … a rock of offence,’  a barrier in the path of one who wishes not to believe in this work.

And, personally and in the best sense, that’s exactly what it is for me. I’m not immune to doubts and questions, but when I feel my faith starting to crash down around me, it always gently comes to rest on The Book of Mormon. People can attack the Prophet Joseph Smith’s method of translation, they can attack the minutia of the story, but they can’t take those moments of quiet spiritual confirmation away from me. The Book of Mormon is true, which means you and I are in the right place in this, the only Church that accepts its divinity. Anything else that stands in the way of our testimony is the result of the faults of men, not of the restored gospel of Jesus Christ.